SAP continued to innovate an already strong reporting platform to include creative use of social media whose intent is to encourage active dialog. Peter Graf, SAP's chief sustainability officer, explained that the new report went beyond the typical exchange between visitors and SAP to encourage cross-pollination among visitors who are "encouraged to share how they are driving cultural change."

SAP also provided the details of its projects' costs and benefits to help other organizations select sustainability investments that can be found in the "Abatement Cost Curve" section. In addition to its own learning, a broad set of case studies representing SAP's diverse client organizations were included.

SAP further refined the highly acclaimed reporting approach that provides easy to comprehend visual data on key metrics with the ability to drill down. The Global Reporting Initiative awarded SAP an "A," its highest grade. Robert Eccles and Kyle Armbrester on the Harvard Business Review (HBR) Faculty blog late last year commented that SAP is "one of the best examples we know of companies using the web well for sustainability reporting."

Improving on that earlier version, Graf reported that the site seamlessly integrates with social platforms such as Facebook and Twitter to provide a fluid flow of information. In addition to standard commenting and discussions, the new platform uses a "Materiality Matrix" to highlight the most important topics in an easy-to-scan format. The user interface was also refined for tablets. 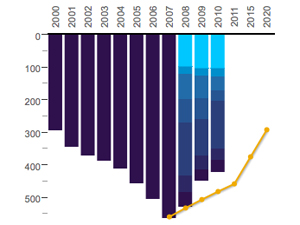 A small detail that illustrates the consideration given to presentation is SAP's decision to turn its carbon graph upside down to show emissions as a negative contribution and the improvements then become an upward graph, acknowledging the business psychology that upward trends are positive.

The exciting new features of the reporting platform were eclipsed by SAP's own progress at reducing its carbon emissions. SAP again exceeded its annual target by reducing carbon emissions by 6 percent compared to 2009, while growing revenues by nearly 20 percent. SAP's published goal is to reduce its emissions of greenhouse gases to 2000 levels by 2020 or approximately 5 percent reduction each year.

One area that HBR Eccles and Armbrester noted as an opportunity for most organizations was to publish an "integrated report" that combines financial and sustainability reporting. SAP's Graf revealed that the 2010 reports are integrated; the annual financial report was also published this week with a link to the sustainability report.

As important as the link between its business and sustainability reporting, goals and strategies, was the decoupling of carbon from revenue. Unlike many companies that use a carbon efficiency measure such as "percent of revenue" or "contribution by employee," SAP established an absolute carbon reduction goal regardless of its growth in revenue or other key business drivers.

The annual Sustainability Report continues to be independently verified by KPMG auditors, providing a remarkable and much appreciated level of veracity. SAP's biggest contributors to reduced carbon in 2010 were its purchases of renewable energy, improvements to facilities and shifting employees to green commuting.

In 2010, SAP realized an improvement of 14 percent for commuting. Drilling into the report further showed commuting represents 8 percent of total carbon contribution and 19 percent in the Americas region for SAP.

One notable role model for green commuting is SAP's Vancouver Canada office where nearly 70 percent of commuters use green methods that include public transit, bike, walk, car pool and telecommute. It is a significant achievement considering that Vancouver’s average is 32 percent use green methods. In part 2, we will explore in more depth this case study.

SAP's comprehensive new sustainability reporting site is both engaging and multi-functional. It's a place for data junkies to slice and dice the data, a place for program managers to pick up ideas to deploy, and a place to share ideas and experiences with the larger community. It also illustrates the often-repeated adage that the IT industry can work to reduce its own emissions, but its real impacts will be attained by helping others do the same.

Want to move beyond spreadsheets to manage carbon data but are confused by the large number of vendors? Groom Energy and GreenBiz.com have teamed up for the 2011 Enterprise Energy and Carbon Accounting Buyers Guide to give you a clear understanding and analysis of this rapidly expanding market based on meetings, demos, and analysis with 32 software vendors.

SAP sustainability update: Energy use grew with revenue in 2011

SAP Wants to Host Your Next Sustainability Report