Outside the door to General Motors' Washington office is a photo of the Chevy Volt framed by the U.S. Capitol.

GM loves to market the Volt, the 2011 Motor Trend Car of the Year ("A car of the future you can drive today.") It's an engineering breakthrough, a darling of the "green" media and evidence that stodgy old GM knows how to innovate.

So why, I asked Mike Robinson, GM's vice president of environment, energy and safety policy, is GM selling so few Volts? Just 321 in January, 281 in February, according to GM's monthly sales report. By comparison, Chevy sold nearly 70,000 Silverado pickup trucks during those two months.

"We're on target," he assured me. "We've probably got orders for every one we can build in the next year." Chevy plans to sell 10,000 Volts this year, and another 45,000 next year and, if all goes well, a lot more after that. 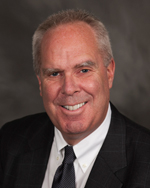 "This is not a science project," he said. "We really want to build a mass-market vehicle. We believe that electric cars are a better long-term solution than pure gasoline."

Strong words from an executive at GM, which remains the No. 1 automaker by sales in the U.S., selling 2.2 vehicles last year. If GM believes in electric cars, chances are we'll be seeing many more of them in the years ahead.

I was meeting Mike for the first time. He's a straight-shooter who divides his time between Detroit and D.C., where he's got an apartment. Mike, 56, is a native of Worcester, Mass. and a lawyer who was educated in Jesuit schools and has worked for GM since graduating from Villanova Law in 1984. Before that, he spent four years as an Air Force officer in Mississippi, Oklahoma and King Salmon, Alaska, where, yes, the fishing was great. He loved the air force, he told me, but didn't care for the bureaucracy. Somehow he wound up at GM. Go figure.

The good news, he said, is that post-bankruptcy, GM is a leaner company where young people, many of them passionate about sustainability, are being heard. "We're a lot nimbler than we used to be," Mike said.

On environmental issues, GM has a good story to tell. Worldwide, GM has reduced its energy usage by more than 40 percent between 2005 and 2009. It has cut water usage by 35 percent. More than half of its worldwide facilities are landfill-free, which is impressive.

In the end, though, GM's sustainability commitment will be judged by the cars it makes and sells. That makes sense in a way, and yet it doesn't: It seems to me that the most we can ask of a big auto company is that they offer a range of quality products, including cars that are small and fuel-efficient. You can't blame GM or Ford if consumers ignore fuel costs (and carbon emissions) until gas prices get really high, just as you can't blame Safeway if their shoppers load up in junk food instead of vegetables. In both industries, smart policy — a carbon price or gas tax in the auto business, subsidized vegetables instead of corn in the food business -- would be the best way to drive change, but our policies for now are anything but smart. (I'll save my critique of federal fuel-efficiency standards for another day.)

Mike did tell me that GM is better prepared than it used to be for a period of high gas prices. "We've worked for some time to balance the product portfolio," he said.

One standout vehicle: The Eco version of the gas-powered Chevy Cruze which, with a manual transmission, delivers an EPA-estimated 42 mpg on the highway and 28 mpg on city streets. (That's superior, as best as I can tell, to my pricier Honda Civic Hybrid.) GM sold more than 32,000 units of the Cruze in January and February, twice as many as the compact Chevy Cobalt that it replaced. "It performs better, it's got more features and better fuel economy," Mike said.

He's most proud of the Volt, a project launched under then-CEO Rick Wagoner. "This vehicle was announced, and the timetable was announced, before we knew how to do everything we've done," he said. "It was like a moonshot." Others haven't matched the battery-plus-gas technology because "it's very, very hard to do."

The Volt carries a steep suggested retail price of more than $40,000. (A $7500 federal credit will ease the sticker shock.) The Volt is pricier than the all-electric Nissan Leaf but it's got an advantage -- an internal combustion engine to supplement the batteries, which have a 40-mile range. So if they run out of juice, you can fill up at a gas station and go as far as you want. Goodby, range anxiety.

GM doesn't think most Americans are ready for all-electrics. "We got to live through that experience in California," Mike said, wryly. "They made a movie about it."

Mike is convinced that the Volt "is a winner, for society and for consumers." It's good for climate change, reduces oil imports and over time, even with its upfront costs, should save money for owners who drive enough miles. EPA estimates 95 city/90 hwy mpg, but actual mileage will depend on how much the car is powered by gas and how much by electricity.

In the end, though, GM won't decide the Volt's fate. The rest of us will. "This is America," Mike says. "People have choice. In some places you might be able to dictate to the population what they are going to do, and not do." Not here, thank goodness.

An ode to the Volt: Farewell, we'll miss you

How Automakers Can Meet the New 54.5 MPG Standards

Why a highly promising electric car startup is failing