Can Climate Capitalism Save the World?

Can Climate Capitalism Save the World?

For roughly three decades, L. Hunter Lovins has been a clear and provocative voice on business and sustainability -- first at the Rocky Mountain Institute, which she co-founded in 1982 with Amory Lovins, and later through her own organization, Natural Capital Solutions.

Along the way, she has been a prolific writer, speaker, educator and a globally recognized consultant on sustainability to companies, governments and others.

On the occasion of the publication of her latest book, "Climate Capitalism: Capitalism in the Age of Climate Change," coauthored with Boyd Cohen, I recently sat down with Hunter to discuss her book (the first of several excerpts can be found here) and her vision of what's possible.

Joel Makower: It's been 11 years since "Natural Capitalism" came out. Why was it time to write another book?

Hunter Lovins: I hadn't intended to write another book. But a man named Boyd Cohen approached me and said that he wanted to be the co-author on the sequel to "Natural Capitalism." I chuckled politely and he said, "No, really." 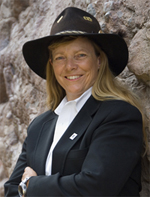 And Boyd was good to his word. He did a lot of the heavy lifting of the research. I did most of the writing. And, day before yesterday, a book arrived, an actual physical book called "Climate Capitalism," which in many ways is exactly the sequel to "Natural Capitalism." We knew that there was a business case for companies and communities and citizens behaving more sustainably, but all we had were occasional anecdotes, and that's what "Natural Capitalism" is -- a collection of anecdotes of ways that people can make more money by behaving more sustainably.

"Climate Capitalism" is, if you will, the conclusion to the argument. We now have overwhelming proof from those wild-eyed environmentalists at Goldman Sachs showing that the companies that are the leaders in environment, social, and good governance policy have 25 percent higher stock value than their less sustainable competitors. And we have research from A.T. Kearney showing that even in the economic collapse, since 2008, the sustainability leaders have the fastest-growing stock value, are well protected from value erosion, even in a down economy, and in 16 out of 18 industries studied, hundreds of companies, these more sustainable companies have an average market capitalization of $650 million more than their less-sustainable competitors. There's the new study out from Maplecroft showing that the top 350 companies in climate innovation and carbon-management programs have a positive correlation between financial performance and their ability to successfully implement disruptive market innovations related to climate change.

Assume climate change is a hoax. Don't go to Vegas on the odds of that being true, but if all you are is a profit-maximizing capitalist, you'll do the same thing you'd do if you were scared to death of climate change because we know how to solve this problem at a profit, and the smart companies are prospering by doing that. The book then walks through nine chapters of showing this in business in general, in energy efficiency, in renewable energy, in buildings, in vehicles and in transportation policy generally, in agriculture, in carbon markets, in adaptations to climate change.

The last chapter says, all kidding aside, climate change is real and it's a very serious problem, but it's only one of a suite of problems now facing us -- everything from record-high food prices and peak oil to the need to bring genuine development to half the world's people that live on less than $2 a day, to the fact that we're losing every major ecosystem on the planet.

And yet what we're doing to drive this is fundamentally uneconomic. So the last chapter asks what will it take to create an economy that meets the needs of all people on the planet while enhancing all forms of capital -- human capital, natural capital, as well as financial and manufactured capital -- and suggests how we might go forward to transform our economy toward prosperity and a system that will support all living things on the planet.

JM: So you're advocating a no-regrets strategy here, which a lot of us have been saying for a while is a good approach. But if it makes so much sense, why aren't more companies saying, "Well, great, let's do this?"

HL: They are doing this. If you look in the last couple years at the growth in the number of companies that are appointing chief sustainability officers, that are implementing significant improvements in the way in which they use energy and resources -- and, often, not for any particular marketing reason. They're doing it as part of ordinary good business. And so they're not really talking about it as green or environmental or sustainability.

I was recently with L'Oreal, and before going, went on the Web and tried to do some research on what they've done around sustainability, couldn't really find much, was prepared to go in and talk to a company that was typically inefficient and hadn't really thought about these issues.

So when I got up to talk, I said, "I've got two things to say to you. One, I'm not quite sure why you have me here. I don't use your product. But, second, y'all have a heck of a story to tell, and if, as you say, you're having a hard time recruiting good talent, try telling your story because you are implementing sustainability." I suggested some things they could do to enhance their profitability by going even further, driving their innovation through approaches like biomimicry, and setting aspirational goals of managing all of their operations to be restorative of human and natural capital as a way to, if you will, benchmark against excellence, not against their competitors.

But here was a company that wasn't greenwashing, wasn't trying to do this as PR, was simply doing it as good operations. And as I travel the corporate world, I'm finding this increasingly.

HL: Many are afraid to because they're afraid they're going to be attacked as greenwashing. My answer to that is hypocrisy is the first step to real change.

JM: What does that mean?

HL: Take General Electric. Here's a company that back in 2005 made a big fuss about ecomagination. They said they were gonna spend a bit over $1 billion in research, in conservation, and try to reduce their greenhouse gases by 2012. All they did were badge as green products they were already making. And yet, by 2007, sales of the ecomagination products had doubled over the past two years, back orders, $50 billion more, and they had cut emissions by 4 percent, well ahead of their 2012 target. By 2010, revenues were over $12 billion in 2010 alone.

They cut emissions by 22 percent and reckon by 2015 that they'd cut the energy intensity of all operations by 50 percent. [CEO Jeffrey] Immelt wrote to his shareholders, ecomagination is one of our most successful cross-company business initiatives. If counted separately, 2009 ecomagination revenues would equal that of a Fortune 130 company, and ecomagination revenue growth equals almost two times the company average.

JM: But most sustainability leadership companies aren't necessarily creating new products or even ramping up sales of their existing products. They're simply cutting waste and inefficiency and toxicity and carbon intensity out of their operations, and sometimes with bold and audacious goals of getting to zero waste or 100 percent renewably powered or something along those lines. And so it's harder to point to revenue growth or a new generation of widgets resulting from this green thinking, but still those are significant steps on the road to climate capitalism.

HL: It is the first principle of natural capitalism and climate capitalism. By using all resources dramatically productively, you also enhance your profitability, cut your costs. But it's only the first step to authentic sustainability. The second step is to redesign how we make and deliver everything, using approaches like green chemistry and Janine Benyus' biomimicry -- asking how does nature do business and then mimicking that, because nature makes a wide array of products and services very differently than we do. And when companies begin to bake these basic principles of biomimicry into how they make their product, how they're going to innovate. As Interface Carpet found, as many companies have found, it drives their innovation, it drives their profitability, it enables them to make products in a superior way that cost less and work better.

Then the third principle is to manage all institutions so that they are restorative of human and natural capital, so that we're getting better, more prosperous, in all ways. By buying time through efficiency, through good housekeeping, we can, as companies, have a bridge from our wholly unsustainable way of doing business today to a realm that we can only dimly imagine, but that every bit of evidence shows us we'll do a better job of delivering quality of life and be more profitable.

JM: So, as you scan the landscape and reflect on the work you do with companies and governments around the world, are you optimistic?

HL: It's a horse race, isn't it? Yes, I am optimistic. There are dark moments. When Chicago Climate Exchange collapsed last fall, it was a very dark moment. The Koch brothers and the other disinformationalists who would have you believe that climate capitalism is costly, that anything we do to protect the environment or people takes away jobs and is a burden on business -- that campaign has been successful. The science is increasingly scary, and there are tipping points in which we may be looking at runaway climate change.

And yet what are the options? We can give up and all throw an enormous party, or we can continue to work as if there is yet enough time. And what I keep being reminded of in working with these companies is that this is the route to prosperity, regardless of whether there's enough time. It's the right thing to do, it's the smart thing to do, it's the profitable thing to do. Let's just do this because it's good business, and let's implement solutions at the speed of business.

Business is probably the only institution on the planet that can move fast enough, that is intelligently enough managed to be able to grasp these opportunities.

We are the new Copernicans