The Emergence of VERGE

The Emergence of VERGE

This week, GreenBiz Group is unveiling a new initiative called VERGE, focusing on the convergence of four technology sectors: energy, information, buildings and vehicles. It represents an exciting new dimension for us, and I’m pleased to share the vision and the plan.

Over the past few years, I’ve been watching -- and speaking about -- this convergence, and its potential for business, society and the environment. VERGE is about an interconnected world, in which this technological mashup yields a diverse array of products and services that aren’t just greener -- with potentially dramatic reductions in energy, water and materials use as well as in waste and emissions -- but also better.

We’ve witnessed other such technological mashups in recent years. In fact, most of us now carry around the fruits of the convergence of computers, telephones, media and commerce. It’s called a smartphone. And its emergence not only has transformed the technologies that underlie these products, and the companies that make them, but also all of us who use them. 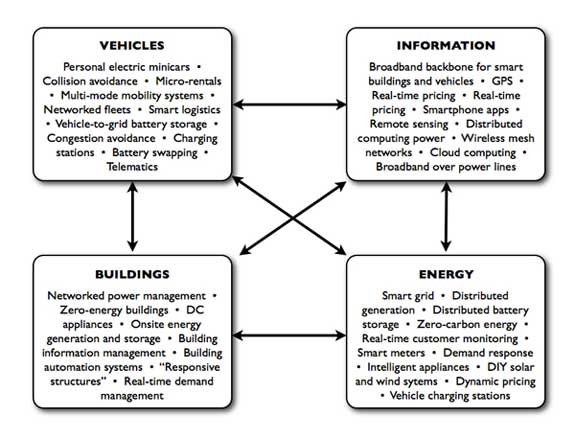 VERGE has this potential, in spades. Relative to smartphone technologies, VERGE technologies are far more capital intensive -- energy plants, vehicles and buildings. The product cycles -- the amount of time it takes to go from concept to market -- is years longer than most IT products and services. And their lifecycle -- their time in productive use -- can range from a decade (for a car) to a century (for a building). Because they are infrastructural, expensive and long lasting, their convergence, while slower in coming, will potentially transform how we live, work, shop, travel and play.

The VERGE virtual conference will be livecast in Shanghai, London and San Francisco. Joel’s introduction toVERGE is available in Mandarin for our partners and friends in China who would like to join the conversation. 下载这篇文章

To help define and accelerate the VERGE opportunity, we’ll be convening three high-level roundtables on three continents. On June 21 and 22, we’ll follow the sun, with consecutive events held in Shanghai (hosted by Rob Watson), London (hosted by Marc Gunther), and San Francisco (hosted by me). Our lead sponsors for the events include Autodesk, IBM, PwC, and SAP.

The events will be livecast in local times, starting with Shanghai and London on the 21st, culminating in a full-day virtual event on the 22nd, hosted in San Francisco. (More in the coming weeks on participating in the virtual event.)

At these invitation-only events, we’ll be assembling executives, policymakers and thought leaders to bring to light the vision of VERGE in their respective organizations, the products and initiatives already underway, and the pathways to success. We will address the barriers participants face -- for example, a lack of policy, industry standards, or customer demand -- and how they might be overcome. By the time the sun sets in San Francisco on June 22, we hope to have a roadmap, or at least the milestones for one.

What’s struck us over the past year that we’ve been envisioning and designing these events are the companies that, implicitly or explicitly, already hold the VERGE vision. Indeed, it seems there are dozens of large companies, and hundreds more smaller ones, that are in the middle of a revolution not all of them yet clearly see. We hope to change that.

As we’ve begun to assess the VERGE market space, we’re also struck by how many companies already are playing in all four of these technologies -- companies as diverse as 3M, Autodesk, Best Buy, Cisco, Eaton, GE, Google, Honda, IBM, Johnson Controls and Schneider Electric. And many, many more are in three of the four technologies. Of course, this doesn’t consider the hundreds -- thousands? -- of startups. And many more VERGE companies yet to be born.

Many of these companies are, or soon will be, finding themselves in new business sectors, sometimes far afield from their original areas of core competence. We’ve already seen this in the IT revolution (Apple as music seller; Amazon as book publisher; Google as travel agent). So, too, in VERGE world: Microsoft as energy management company; Boeing as solar company; Best Buy as EV renter). As the landscape shifts, the technologies mature, and the end-user applications grow, this blurring of traditional boundaries will accelerate.

All of this represents the first steps in what we anticipate will be a long and exciting journey to elevate the world of VERGE. I’ll look forward to bringing you more information in the coming weeks on what we’re doing and how to participate.

How companies capitalize on convergence to speed sustainability

3 Tips for Avoiding the Perils of Dirty, Messy Data

The Emergence of VERGE in the UK