Indeed, the market for electric cars is so distorted by government subsidies that it's all but impossible to determine the true cost of an electric car.

Notice that I said cost and not price; there's a difference, and it's relevant to any conversation about business and the environment. Coal-powered electricity is cheap but the price doesn't reflect the costs of burning coal, including lung disease, mining accidents and greenhouse gas emissions. (See "Fossil Fuels: A Legacy of Disaster" from the Center for American Progress.) Hamburgers are cheap but the true cost of beef includes methane emissions, farm subsidies and, arguably, heart disease. Gasoline-powered cars externalize costs that include smog, carbon emissions and, some would say, a foreign policy that favors stability, i.e., autocracy over democracy in the Middle East.

The tax credits are merely the most visible form of federal support. Energy Secretary Steven Chu, who spoke at today's event, said the government has invested $5 billion so far to electrify the nation's transportation system. It provided loans of $2.6 billion to Nissan, Tesla and Fisker to established electric car factories, $2.4 billion in grants to establish 30 electric vehicle battery and component and another $80 million for advanced research and development. (Here's a DOE report, PDF, download, with details.)

Virtually every car and component maker on display today in D.C. reflected your tax dollars at work. Ecotality, for example, which makes the Blink charging stations, is leading a $230 million initiative, half of which is funded by DOE, that plans to install more than 15,000 EV charging stations in the coming months.

What benefits are generated by all the subsidies? That was the focus of remarks by Energy Secretary Steven Chu and Ed Markey, the Democratic congressman from Massachusetts. 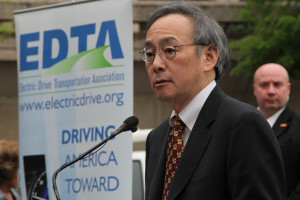 Jobs and economic growth, Chu said. "We're in a global race to develop these technologies," he said. "The prize is a multi, multi-billion dollar market." The government stimulated and subsidized the development of semi-conductors, computers, the Internet, biotech and even the airplane, all of which delivered jobs and other untold benefits to Americans.

No more support for oil sheiks, according to Markey. "Americans are ready for an oil change," he said. "It is time to break the monopoly that oil has on our transportation sector."

Ted Craver, the chairman and CEO of Edison International, a utility company that stands to gain from the electrification of transportation, also cited energy security as a benefit of electric cars. "Nearly all of the electricity generated in America uses domestic fuel sources," he said.

Perhaps because Republicans now control the House, and many are climate change skeptics, little mention was made of the environmental benefits of electric cars. But even with today's fuel mix for electricity, which is about 50 percent coal-generated, electric cars generate fewer emissions than gasoline-powered vehicles.

Do the gains outweigh the costs? Maybe, so long as we don't subsidize electric-car owners in perpetuity.  (The $7,500 tax credit extends only to the first 200,000 electric car buyers.)

I asked Secretary Chu and Ed Markey when they thought electric cars would be able to compete without subsidies.

Chu said two things have to happen -- the range of batteries has to get longer, to perhaps 300 miles, and battery costs have to come down. Some experts say battery costs could be cut in half in the next few years.

"Hopefully, by the end of this decade, we're going to be at parity," Chu said.

Very roughly, because the numbers are trade secrets, electric-car batteries cost up to $1,000 per kilowatt. The Leaf has a 24 kwh battery, the Volt a 16kwh hattery, so their upfront costs are thousands of dollars higher than comparable gas-powered cars. But because running a car on electricity costs much less than powering it with gasoline, operating costs are substantially lower.

"You can't pick the exact year" when subsidies will no longer be necessary, Markey said, "but Saudi Arabia helped us this past weekend by saying they're going to keep the price of oil high." Gasoline at $4 or $5 a gallon makes electric cars more appealing.

Today's motorcade was impressive because it featured not just the well-publicized Chevy Volt and Nissan Leaf but cars from Toyota, Mitsubishi, Tesla, Think and Coda Automotive, along with trucks from Eaton, Odyne, Smith Electric and Via Motors. The event was organized by the Electric Drive Transportation Association (EDTA), which is holding its 2011 conference this week in Washington. 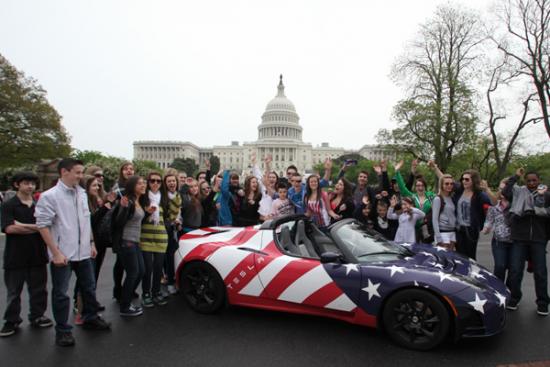 CODA Charges Ahead with Electric Cars

Why a highly promising electric car startup is failing

How Electric Cars Will Save You Money

Charging Ahead with Electric Cars