At this year's New York International Auto Show, the capstone of the 2010-2011 auto show season, the major auto makers' displays were big, bold and green remained the theme as the industry moves back to financial stability.

As we reported from Geneva, nearly every major introduction touted environmental performance as a focal point, if not the heart of the news.

There's widespread agreement on the reason automakers are going green: $4 gasoline is the "new normal," environmental regulations are tightening and headlines calling for freedom from oil spills and autocrats are all over the news. 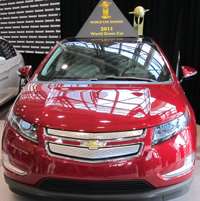 A Fork in the Road

What the New York show highlighted, however, is that automakers disagree on the path toward sustainable mobility. Some are taking a technological route. For example, we saw the Chevy Volt take home this year's "World Green Car of the Year" award and the Nissan Leaf winning top honors with "World Car of the Year."  Others are applying blocking-and-tackling engineering like lightweighting and aerodynamics to improve performance. Hyundai's CEO, for example, continued his company's save the asterisks campaign to highlight their commitment to the mainstreaming of sustainable mobility with increased fuel efficiency across their fleet. Ford previewed a new Taurus with two EcoBoost engine options, resulting in up to 20 percent better fuel efficiency than current models.

A Drive Around the Block

The organizers of the New York show boasted of 56 North American debuts across nearly 1 million square feet of floor space. Among the highlights:

•    Electric vehicles took two honors at the show's "World Car of the Year" awards, as mentioned above, with Nissan's Leaf besting the Audi A8 and BMW 5 Series in the final round. The Chevrolet Volt was named Green Car of the Year.
•    At the Chevrolet stand, GM unwrapped the 2013 Malibu Eco. It uses a lithium-ion "mild hybrid" technology called eAssist that will offer 38 mpg on the highway.
•    Ford will refresh the Taurus for 2013 with a 237-hp turbocharged "EcoBoost" two-liter engine and active aerodynamic shutters good for at least 31 mpg on the highway, which Ford claims will be best in class when it goes on sale next year.
•    The $13,000 new Hyundai Accent will get 40 mpg on the highway, joining the Elantra, Sonata hybrid and upcoming Veloster coupe as Hyundai's fourth model to hit the magic 40 mpg.
•    Nissan's new Versa will start at just $10,990 and give 33 mpg combined and 37 mpg on the highway. Nissan also introduced a Leaf-based race car called the NISMO RC aimed at "the development of a new green motorsports series."
•    Honda released five 9th-generation Civic models, three of which are focused on sustainability: The high-mpg HF, a lithium-ion powered hybrid and the GX, which is powered by natural gas.
•    Lots of news at the intersection of sustainability and luxury: BMW announced that its ActiveE electric 1 Series will be available in limited markets this fall on a two-year lease at $499 per month. Lexus unveiled its Lexus LF-Gh Hybrid Concept that's said to point to the brand's future design direction, while the Concept A-Class from Mercedes-Benz suggests strongly that the brand will bring its smallest car to the US in 2013./p>

Conversely, John Krafcik, CEO Hyundai North America, when speaking about increased fuel efficiency over electrification, told reporters, "We think that`s a much more cost effective way not just for Hyundai, but for our customers and for society as a whole to reduce CO2 emotions associated with the industry."

As some OEMs experiment with new propulsion systems, questions remain around which technology (plug-in EV, hybrid, hydrogen, biofuels, or something even newer) will prevail. At the same time, other car makers are focusing on improving upon what we've got now -- greater efficiencies out of internal combustion engines. However, there is a risk to focusing only on short-term fuel efficiencies when competitors are pushing forward new technologies and innovation; a manufacturer will develop a breakthrough technology that changes the car game forever, and those sitting on the sidelines will be three to five years behind the winners.

So what else do we need, as a nation of drivers, to push forward both new technologies and advances in the technologies we already widely use? To start, we need a clear national energy policy relating to personal mobility. For example, our policymakers need to decide how we should invest in renewable sources of energy, which can power EVs, while avoiding fractured legislation, like the proposed EV taxes in Washington State and Oregon. Furthermore, development of the infrastructure necessary to take advantage of many new technologies (smart grids and charging stations, biofuel production and distribution, or even congestion-clearing road systems) is key to the success of whichever solutions the market determines. EV technology may become widespread, but until we have clear policies in place for the expansion of delivery infrastructure, EV growth is limited by the capacity of the current power grid.  The same is true for distribution of biofuels or natural gas.

Automobile companies are excellent at what engineers call "integration," or bringing different technologies together onboard an automobile and making them work together. The automakers that will be most successful in solving the sustainability challenge will be those that extend this integration expertise to the broader system of mobility -- even when that system reaches beyond their direct circle of influence, as with electric vehicles, for example.

The GreenBiz VERGE initiative will begin to address some of these complex and interdisciplinary challenges. Simultaneously pursuing both the incremental and transformational strategies, backed by a clear national energy policy and combined with potential IT breakthroughs like IBM, Caltrans' and UC Berkeley's personal commuter forecast technology won't be easy. But if we're serious, as a nation, about meeting 2050 CO2 targets for personal mobility -- never mind the challenging 2016 CAFE standards -- it's our only way to the finish line.