Unless you avoid pork for religious reasons, you've probably eaten pork products from Smithfield Foods: the bacon or sausage in a McDonald's Egg McMuffin, Armour-Eckrich bologna or ham, pork from Bob Evans or Jimmy Dean's, an Esskay hot dog at Baltimore's Camden Yards, and quite likely your Easter ham.

Smithfield is a pork giant. It has 49 factories, 500 or so hog farms, 48,000 employees and about $11 billion in revenues in FY2010. It slaughtered about 27 million animals last year in the U.S. "We're the largest pork producer in the world, by a long shot," says Dennis Treacy, the company's chief sustainability officer.

Yes, Smithfield has a chief sustainability officer -- and that may surprise you if you remember reading horror stories about Smithfield's confined animal feeding operations (CAFO's), its problems managing pig manure, its labor conflicts or animal welfare issues in places like The New York Times and Rolling Stone. The company was featured -- not in a flattering way -- in the movie Food Inc. and sued by Robert F. Kennedy Jr. and the Waterkeeper Alliance.

Treacy had problems with Smithfield, too, before joining the company. In fact, Treacy, who was the director of the Department of Environmental Quality (DEQ) for the state of Virginia from 1998 to 2002 under Republican Gov. Jim Gilmore, once sued Smithfield for polluting the state's waters. (You can look it up here.) In 1997, Smithfield was fined $12 million, one of the largest fines at the time, for violations of the federal Clean Water Act.

Now, though, Treacy says Smithfield has cleaned up not just the water but its own act. He's been with the company for nine years, and says he was hired to make the company more sustainable and improve its reputation. "We have slowly but surely built a sustainability program," he says. "It's the right thing to do, and everybody wants to work for a company that is respected."

I met Dennis earlier this week in Washington. He seems like a good guy, and he's spent his career on environmental issues -- he studied fisheries and wildlife at Virginia Tech, got a law degree from Lewis and Clark in Oregon, which is a top environmental law school, and he lives on a small farm near Richmond where he and his wife raise chickens and rabbits.

There's solid evidence, too, that Smithfield is changing. The company settled with Waterkeeper, which praised its remediation efforts. After a long and bitter battle with union organizers, workers got to vote, formed a union and negotiated a contract with Smithfield. The company got 36 notices of environmental violations in 2009, the last year in which it reported data, and paid $81,726 in fines -- which isn't zero, but it's far less than $12 million and its numbers are generally moving in the right direction. "We've got 48,000 employees out there," Dennis told me, "and while we're having this discussion, one of them is doing something wrong. This is a really tough industry. Many of our facilities are old." The company published a 101-page corporate social responsibility report, disclosing more than anyone would want to know about its greenhouse gas emissions, water use, employee safety record, community giving, etc.

Treacy says there are several reasons why Smithfield has changed. No company likes running up big legal fees or paying big fines. Some of its "green" initiatives deliver directly to the bottom line -- for example, it captures methane emissions and turns them into electricity at its big pork processing plant in Tar Heel, N.C. Besides that, some of its biggest customers -- Walmart and McDonald's, notably -- have insisted that their suppliers become more environmentally responsible.

"The McDonald's of the world don't want people attacking their brand. Neither does Walmart," Dennis said. "Neither do we." As part of the Walmart-driven Sustainability Index, Smithfield has joined with other pork producers to fund research at the University of Arkansas to better measure the carbon footprint of pork production, from farm to plate. 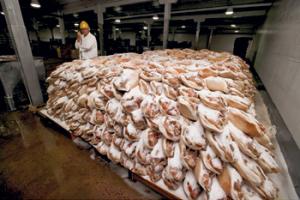 Still, Smithfield is a prime example of what critics like to describe as "industrial agriculture" or "factory farms." There's nothing bucolic about raising pigs for the mass market. Pigs don't wander free. They're raised indoors, in crowded barns. Their manure drops through slats in the floor and is flushed through underground pipes into giant, smelly lagoons. This creates what Smithfield likes to call a "natural fertilizer" which is then spread or sprayed onto fields where corn, soybeans, Bermuda grass or other crops are grown. (See the chart below, from Smithfield; click to make it larger.)

All of Smithfield's farms s meet ISO 14001 standards, an environmental standard that requires third-party certification. "This is one of the most highly regulated activities there is in the environmental field," Dennis says, adding wryly: "We can't afford to make a mistake given the reputation we enjoy." 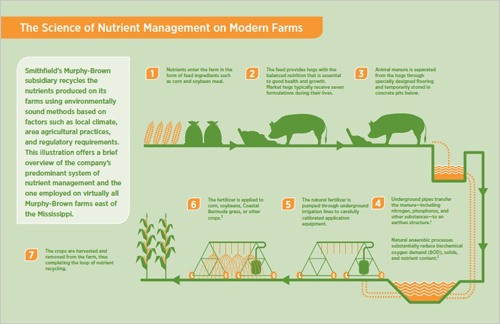 Given Smithfield's sorry history, those of us who pay attention to sustainability would do well to withhold cheers, at least for now. We'll see how the company performs for the next few years.

Beyond that, we should about the bigger questions about whether it makes sense to grow vast amounts of corn and soybeans to feed pigs to create animal protein. Many people argue that meat production is bad for the planet and eating as much meat as Americans do (twice global averages) is unlikely to be good for health, although the science isn't entirely settled. See Mark Bittman on the evils of meat and a different view from Gary Taubes (Is Sugar Toxic?), both from The New York Times.)

Tomorrow, we'll look at a different approach to meat -- an idea known as Meatless Mondays, that comes not from PETA but from a global corporation that feeds tens of millions of people every day.