You've probably heard of Kiva, the peer-to-peer microfinance website. Founded in 2005, Kiva has earned a reputation as an innovative nonprofit: It has enabled loans to be made to about 573,000 low-income entrepreneurs worth more than $210 million in 60 countries. More than 570,000 people, mostly Americans, have done the lending, and the repayment rate is more than 98 percent. This would be reason enough to cheer.

Not content with the status quo, though, Kiva lately has pushed into new arenas. Last fall, Kiva added "student microloans" to its range of offerings. Last month, Kiva, added a category called "green loans," permitting businesses and individuals in poor countries to borrow as little as $25 to make their homes or workplaces more energy efficient, to recycle more or to convert to clean energy sources. 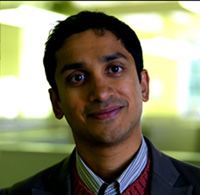 Last week, I talked via Skype with Premal Shah, the 35-year-old president of Kiva about the new initiative. He's smart and engaging, easy to talk with, and thoughtful about economics, his undergrad major at Stanford. He told me that Kiva, to magnify its impact, he explained, wants to take advantage of the fact that its lenders are for the most part willing to take risks. People aren't putting their kids college funds or retirement savings at risk here. So Kiva has the freedom and the opportunity to test new ideas in microcredit.

"The Internet community can come in, take risks, try something that's unproven," Premal told me. So Kiva should be constantly exploring the "risk and cost frontiers of microfinance," pushing the envelope and then hoping that more risk-averse providers of capital, like conventional banks, will follow.

Premal, who was born in India and moved to Minnesota as an infant, told me that he got interested in microfinance during his sophomore year in college when he stumbled across the concept in an econ course. "It combined what I was studying with what I loved in my heart," he said. He got a grant to work at a women's cooperative in India and returned to India almost every year on his vacations while working as a management consultant and then as a product manager at PayPal. He thought about how PayPal or eBay could be used to make loans, pitched the idea to eBay honchos Meg Whitman and Pierre Omidyar and eventually decided joined forces with Matt and Jessica Flannery, the husband-and-wife who started Kiva.

Kiva was a big hit out of the box, spreading virally and winning praise from mainstream media outlets like Oprah, NPR, and Nicholas Kristof in The Times. The idea -- which has been described as microfinance meets match.com -- appealed to Internet-savvy young donors who can see where their money is going. The startup's young-hip-techie-serving-the-global-south aura made Kiva a Silicon Valley darling. Its corporate supporters include PayPal, Google, Visa, Yahoo!, Facebook, Intuit, Intel and Starbucks.

Kiva's green loans work like its existing loans. Kiva makes the loans through more than 150 microfinance institutions, called field partners. Lenders don't receive interest. Low-income borrowers pay interest to the local partners, but much less than they would pay in the informal marketplace. 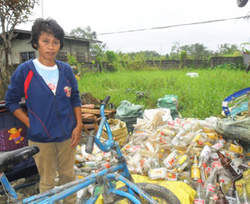 Green loans differ from Kiva's traditional loans because they are available to consumers as well as entrepreneurs. For example, a nonprofit called KADET (Kenyan Agency for Development of Enterprise and Technology) loaned a client $300 to buy a solar-powered device to light his home, replacing diesel-powered lanterns which are more polluting and more costly in the long run. Most loans continue to go to very small businesses, though -- a woman in the Philippines who borrowed $475 to buy scrap metal and plastic for her recycling business, a taxi driver in Bolivia who borrowed $500 to power his car with liquid natural gas rather than gasoline, a woman ion Mongolia who borrowed $575 to purchase seeds to grow trees to generate income. (Click on any of those links, and you'll see how Kiva is both data-driven and transparent about its work.) Just as it takes upfront capital to buy a Prius or solar panels or home insulation in the U.S., these upfront dollars can save money in the long run for borrowers in poor countries.

I'd now recommend that you visit Kiva and consider making a green loan except for this -- they are fully funded. This is a good news. Kiva's field partners, who see that money is available, will now encourage their clients to borrow to go green. To further encourage them, Kiva will allow the local microfinance institutions a bigger credit line for their green loans.

"No message is stronger than money," Premal says.

The cool thing about Kiva is that it is driving commerce in a scalable way. Success begets success. People who lend money, and get repaid, are willing to lend again. Borrowers, too, can build track records, and grow their businesses. When the loans are green, this is moving us towards sustainability in every sense.

Investing in Cleantech, $100 at a Time

What Green Businesses Should Know About Microfinance