A dentist specializing in kids' teeth has received the first LEED rating for a private pediatric practice in the latest boost for the green dentistry movement.

Dr. Gila C. Dorostkar, whose office is located the town of Greenbrae in California's Marin County, is now aiming for GreenDOC certification from the Eco-Dentistry Association as an environmentally friendly dental practice.

GreenBiz readers are familiar with the green dentistry movement thanks to Ina Pockrass, a speaker at this year's State of Green Business Forum in presentations in San Francisco, Chicago and Washington, D.C.

Pockrass and her husband, Fred, a dentist in Berkeley, Calif., opened the first green dental practice in the U.S. and founded the Eco-Dentistry Association. The industry group, which has about 600 members, awarded its first certifications last year. 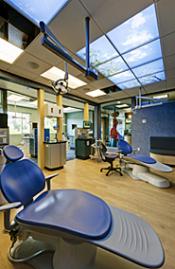 Dorostkar, a member of the organization, has been in business since 1997. When her practice outgrew its space about two years ago, she decided that her new quarters should reflect long-held eco and professional values as much as possible, according to business consultant John Millar.

"She's always been conscious of minimizing waste and being environmentally friendly," said Millar, the project manager for the design and construction of the new office.

To create Dorostkar's new 2,500-square-foot office, located in a larger building across the street from her former digs, the existing space was torn down to its studs, Millar said.

Other private dental facilities have earned LEED ratings, but until Dorostkar's office was certified none had been pediatric practices. The office's LEED certification for commercial interiors speaks to the environmental elements of the site; the GreenDOC certification Dorostkar is seeking from the Eco-Dentistry Association pertains to the operations of the dental practice. 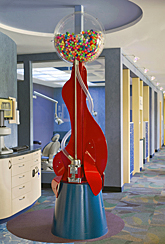 Standards for both certification groups helped guide the vision for the office. Of equal important in the design process, Millar said, were considerations of the needs of Dorostkar's clientele: children, who can be even more apprehensive than adults about settling into a dental chair.

"We had a goal of building a very comfortable, inviting space for kids and their parents," Millar said.

Upon entering the office, children don't immediately see the bank of treatment rooms. They might notice the brightly day-lit office and its colorful decor, but what captures their attention is the big red sculpture of a seal just off the reception area, Millar said.

The seal, specially designed for the office, holds small toys in a transparent plastic ball atop its nose. Children who do well during their dental visit get to turn the handle at the base of the sculpture and claim a prize before they go.

Eco-Dentists Aim to Clean and Green

A Green Business With Teeth

Pennsylvania Dentists Pledge to Purge Mercury from Their Offices