The world’s largest lighting tradeshow, LIGHTFAIR International, is occurring this week in Philadelphia. While I was unable to go to the show this year, I have been glued to my computer reading about new product launches, each more amazing than the one I just read about.

Without a doubt, the theme of the show is new energy efficient bulbs. The new technologies are coming from leading manufacturers of lighting products that are showcasing bulbs in every shape, brightness level and price point imaginable.

The industry is really racing to provide more energy efficient alternatives to the 125-year-old incandescent lightbulb. A major catalyst for all this work is the new federal energy efficiency standards for lightbulbs that go into effect starting in 2012 that will update the energy-guzzling, 100-watt lightbulbs.

In the last year or so, we have seen more innovation in this space than in the last 50 years combined. Below are some examples of the new lightbulbs that consumers will soon see on the shelf:

New and improved incandescents. Earlier this year, each of the big three lighting companies -- Philips, GE and Sylvania -- "reinvented" the incandescent lightbulb and introduced new versions that use at least 28 percent less power to operate. These bulbs will comply with the new federal efficiency standards. We understand leading lighting companies like TCP, the biggest producer of CFLs sold in the United States, are hard at work at producing an even better incandescent that uses 50 percent less energy than conventional bulbs.

Brighter and better performing LED bulbs. LEDs use around 80 percent less energy than today's incandescent and last up to 25,000 hours (that's almost 25 years at around three hours per day). LED manufacturers have been working hard to make LED bulbs brighter, dimmable and able to distribute the lights in all directions. At LIGHTFAIR several companies announced new LED lightbulbs that only use 17 watts and are just as bright as the old 75-watt incandescent bulb.

Here is a picture (left) of the Philips EnduraLED, which is expected to hit the shelf later this fall. Not only is this bulb super efficient but several of the key components are likely to be manufactured in the US.

This week, I got a call from a colleague who was excited to share that lighting manufacturers had figured out how to make a LED that is as bright as a 100-watt incandescent. The news keeps getting better. At least three companies showed prototype LED bulbs that would replace today's 100-watt incandescent and only use 15 watts or so. 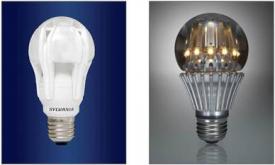 These bulbs are being shown by companies such as Lighting Sciences Group, Osram Sylvania (the bulb pictured to the right, in the left frame) and a new startup company called Switch Lighting (the bulb on the far right), which features this futuristic looking design.

Longer Lasting and Improved CFLs. Not to be lost behind all the buzz about LEDs, let's not forget the little ole spiral CFL. CFLs continue to be a very cost effective energy saving option for consumers. Today's CFLs are far superior to older versions and will save consumers $30 to $50 over their lifetime. Lighting manufacturers have also been working to extend the bulb lifetime and most of the bulbs now are rated 8,000 and 10,000 hours, up from 6,000 hours previously. CFL pricing has come way down and consumers can now find CFLs for $2 per bulb in multipacks at big-box retailers. In addition, retailers like Home Depot and Lowe's have stepped up to the plate and offer free recycling for the bulbs.

Based on all the points of bright light emerging from Philadelphia, the City of Brotherly Love, this week, it's clear that consumer choice will increase as a result of the new lighting standards. Choices will include new energy saving incandescents, CFLs, LEDs and probably some new technology we have not even conceived of. Let there be light!

Changing the Lightbulb as We Know It