Why Solar is Looking Better for Commercial Buildings

Why Solar is Looking Better for Commercial Buildings

In two years, the prices for solar photovoltaic panels have plunged as a result of greater efficiencies in manufacturing and in the technology itself. Increasing competition among a growing number of suppliers has also helped reduce costs.

The forces are expected to drive prices further down in coming years, making solar PV installations a brighter investment prospect for commercial buildings, according to Greg Sheppard, the chief research officer for photovoltaics at market intelligence firm IHS iSuppli. Sheppard explored the reasons why in a webinar for GreenBiz.com this week with Clean Edge Senior Editor Clint Wilder.

Solar power applications are "transitioning from the world of pretty showcases into actual, practical, functional uses on buildings," Sheppard said in the webinar, "Solar Powered Buildings: Worth Another Look as Prices Fall."

Currently, though the market has grown significantly, solar power supplies less than 1 percent of the electricity used in the United States. A capital-intensive proposition, like most renewable energy technologies, payback periods on the high end tend to range from 20 to 25 years.

Clean Edge's recent annual report on clean energy trends, released earlier this spring, found that the global market for solar photovoltaics ballooned from just $2.5 billion in 2000 to $71.2 billion in 2010.

Last year, "the market just exploded," Sheppard said, and now the PV market worldwide is poised to double in by 2015. The U.S. market is expected to grow steadily throughout the period despite a likely blip next year as a result of feed-in tariff changes abroad. Here is a chart that Sheppard included in his talk: 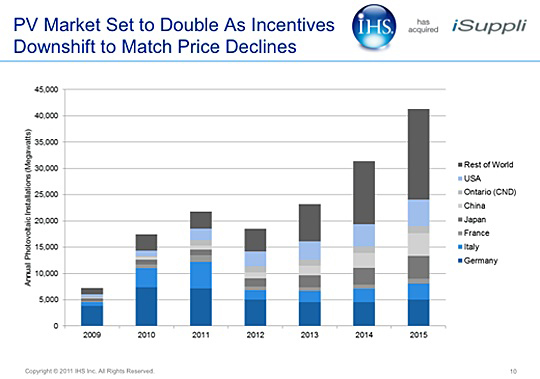 In 2009, the cost per watt for a PV solar panel was approaching $2.50. By 2015, the cost per watt is expected to near $1 with the panel price closing in on roughly $200. "A dollar per watt is on the horizon," Sheppard said, because the industry is "enjoying tremendous economies of scale, efficiency breakthroughs and more efficiently manufacturing." All of which help to also lower material costs.

Installation prices for commercial systems also are expected to fall, decreasing about 10 percent a year, said Sheppard. The current average installation price for a PV system, now roughly $5 per watt (and down from $9 per peak watt in 2000 according to the Clean Edge report), is expected to sink to slightly more than $3 per watt by 2015, he said. 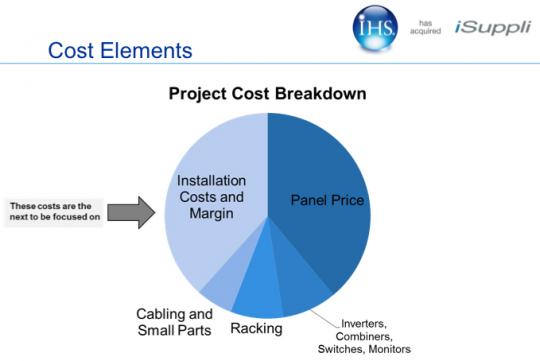 Installation prices, which include labor, margin and soft costs associated with permitting, inspection and interconnection, have been a challenge for the industry. As the Rocky Mountain Institute's Kelly Vaughn wrote in a post last fall, balance of systems costs (the upfront costs for a PV system except for the module) have been a sticking point.

As the cost of PV panels drops precipitously, both RMI and IHS iSuppli research contend that driving out the waste and inefficiencies related to installation will bring total systems costs down, cut the length of time for return on investment and bring solar power systems within reach of more companies. Sheppard said he expects that area will see increased efficiencies in the coming years.

Overall, such anticipated improvements would bode well for internal rates of return (which businesses use in capital budgeting to compare profitability of investments) for solar PV and help strengthen the industry. And as a result, the possibility of "the market standing on its own without incentives" would become a reality, Sheppard said.

He also noted the ways that companies can derive benefits from having solar power on their property -- usually on the roof for the most efficient use of space -- with little or no upfront costs:

Power Purchase Agreements. Companies can enter into power purchase agreements in which the installer pays the costs to acquire, permit, install, finance and usually maintain, monitor and service the solar power system. The installer owns the system, has rights to the electricity generated and enjoys the tax benefits and rebates, if any. The company that owns the host property negotiates a set rate for electricity, typically a rate below current market, from the installer and gets the benefit of lower and more predictable energy bills.

Leasing Roofs. Owners with eligible properties, usually those of a certain size with roofs that are relatively new, may also lease their roofs to utilities.

The webcast with Sheppard's full presentation, Wilder's comments and a Q&A with the audience is being archived and will be available at GreenBiz.com.

How to bring solar power to the poor

Solar suburbs: The future is now