In the virtuous race over bragging rights for the title of greenest building, there are various shades of LEED, there's net-zero energy, and there's Energy Star, too.

But how many facilities can sink a pipe into a parking lot, tap into more than enough energy to supply year-round heating needs, and just maybe have enough left over to generate much of the site's electricity?

Welcome to Reno, Nevada, where the filigreed micro-fractures that spread out from California's San Andreas and other major faults have created a subterranean wealth of hot rocks and heated water.

These geological blessings have made it possible, right in downtown Reno, for the Peppermill Resort Spa Casino a 2.2-million-square-foot complex -- to switch off its fleet of fossil-fueled boilers as part of a $9.7-million project to switch over to geothermal heat.

The hotel is saving $2.2 million per year in natural gas purchases. "That is what you call a no-brainer," says Dean Parker, who as Peppermill's Executive Director of Facilities, has overseen the four-year project. 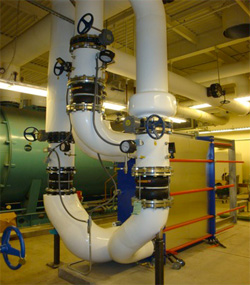 Peppermill's past and future sit side by side in its spotless power plant shed, a stone's throw from the main hotel. To get to the new geothermal heating unit, you have to pass by four hulking Cleaver Brook Boilers. Now barely used, the central-plant boilers once cranked out up to 100 million BTUs of heat.

But today, Parker jokes he's thinking of putting them up on eBay. Replacing all four of the garage-sized boilers is a single so-called "plate and frame" heat exchanger, made by Alfa Laval and pictured at right, no larger than a modest bathroom.

The device sandwiches together hundreds of thin, table-sized stainless steel sheets that work as a radiator, transferring heat from incoming geothermal fluids that measure 174 degrees Fahrenheit into fresh water passing through the heated plates. The fresh water is thereby warmed to 120 degrees and then stored in an armada of oversized Thermoses. Earth-heated water supplies all of the hotel's needs: 1,600 guest rooms, heating, kitchens, laundry, pools, hot tubs, spas, kitchens and more.

The heat exchanger can meet the hotel's needs and then some, pulling about 900 gallons per minute of geothermal fluids from the earth. Both it and the well are designed to crank up to 1,500 gallons per minute. "So far as we know, we're the only hotel-casino fully heated by on-site geothermal," says Parker.

Geothermal Heating is a Go; Energy is on the Horizon

Electricity generation could be the company's next project. The geothermal resource below Peppermill has enough capacity that the Peppermill is scoping out a 6- or 7-megawatt electricity generator. With commercial rates for power in the Reno area at around 9 cents per kilowatt-hour, the savings could be considerable.

There are challenges, however. Though warm enough to meet the hotel's day-to-day hot water demands, Peppermill's geothermal supply may be a too cool to generate power, since conventional geothermal power plants typically need water at 275 degrees and higher.

But the technology is improving quickly: Parker is hopeful that a so-called "binary cycle" power plants might work. Rather than spinning a turbine by boiling water into steam, these systems use special gases that transform from fluid to gas at room temperatures.

The hotel's experience developing its new project also reveals the risks of prospecting geothermal resources. Northwest Nevada is rich in geothermal resources, and the hotel had years ago built a so-called "shallow" well, that, at around 900 feet deep, was supplying 120-degree water. Hot enough to heat its pools, but not sufficient to meet operational needs.

To upgrade its geothermal capacity, the hotel decided to dig deeper. Following studies suggesting hotter water could be found deeper down, the hotel erected a drilling rig in a parking lot late in the summer of 2009. Sound barriers helped minimize the noise from affecting guests and neighbors. 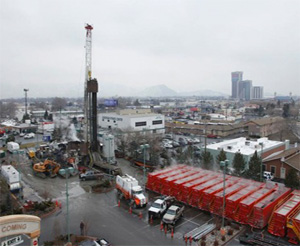 At first, the drill came up dry, raising the specter of a costly error. Pushing on, and operating round the clock for 28 days -- at $100,000 per day -- the rig bored to a depth of 4,421 feet down. There it found a gusher of 174-degree water that today provides all of the hotel's heat.

These days, with the drill long gone, the well is all but invisible, hidden under a manhole cover that straddles two parking spaces in the restored lot. Opening that cover, all that can be seen now is a 9" diameter pipe that surfaces into a fire hydrant-sized valve which can steer up to 1,500 gallons of hot, salty brine into the hotel's power plant a few hundred yards away.

In January 2010, the hotel drilled a similar, second well located about 1,000 feet across the hotel's property. Plunging to just 3,900 feet, this second well is used to re-inject the hot brine back into the earth after it has been used to heat fresh water.

This closed-loop is designed to make sure the subterranean heat resource isn't depleted. Once the hot fluid surfaces, only some of its heat is extracted before the fluid is piped back to the injection well and sent back down into the same geological formation. Down below, the water re-absorbs heat from the earth, to be recycled again and again.

The Peppermill's location is blessed with more than ample superheated water. Over the past decade, Reno has emerged as a hotbed (couldn't resist...) of the geothermal industry. About a quarter of Reno's daytime electricity demand, and most of its nighttime needs, are supplied by Ormat's 100-megawatt Galena geothermal plant just outside the city.

Along with Ormat, the bulk of the U.S. geothermal industry -- including Ram Power, Magma Energy, Terra Gen, Gradient Resources and Enel Green Power -- all operate locally. Dozens of geothermal power plants are in the pipeline, in large part to help meet California's looming goal of generating one-third of its electricity from renewables.

Political support is strong too: Reno is an area where "Republicans want renewables," and lawmakers have supported both state-level renewables policy, along with university R&D programs as well as community college courses focused on supplying geothermal technicians.

Nevada Campus to be Fully Powered by Geothermal Energy

How next-gen geothermal could boost the future of energy