Our Stormy Long-Range Forecast, and the Risks It Poses

Our Stormy Long-Range Forecast, and the Risks It Poses

It's sometimes said that no individual storm, flood, drought or wildfire can be specifically attributed to climate change.

That may be true but Kevin Trenberth, one of the world's most prominent climate scientists, says it misses the point.

Sure, we've always had extreme weather events. But, he argues, they are more frequent and more intense because of climate impacts. And that's important.

"The environment in which all storms form has been changed by human activity," Trenberth says. Thus the storms have been affected, too. 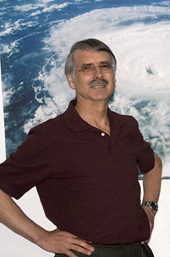 Trenberth spoke to a group of reporters at National Center for Atmospheric Research (NCAR), where I'm on a fellowship this week. An MIT-trained meteorologist and a native of New Zealand, he was a lead author of the 1995, 2001 and 2007 IPCC reports and he has led NCAR's Climate Analysis Section since the late 1980s. In other words, he knows his climate science.

Let's be clear about the claim he is making: Trenberth is not saying that climate change caused this year's severe Mississippi River flooding, Texas drought, Arizona wildfire, heavy rains in Memphis or tornadoes in Joplin or Tuscaloosa.

He is, however, saying that those extreme weather events -- those storms, as well as last year's floods in India and Pakistan, and a heat wave in Russia -- were almost surely made more extreme because of climate change.

His argument is logical and not complicated: Climate change has increased air temperatures -- 2010 was the warmest year on record -- and so the atmosphere can absorb more moisture. For each degree C of warming, the air can hold about 7 percent more water, he said. At the same time, higher temperatures lead to greater evaporation and surface drying, thereby increasing the intensity and duration of drought.

Hence, storms, whether individual thunderstorms, extratropical rain or snow storms, or tropical cyclones, supplied with increased moisture, produce more intense precipitation events. Such events are observed to be widely occurring, even where total precipitation is decreasing: 'it never rains but it pours!'

To be sure, other scientists are reluctant to draw connections between global warming and the frequency and intensity of storms.  Some argued after Hurricane Katrina in 2005 that the Atlantic Ocean was then at the peak of a natural 20- to 30-year-storm cycle. Here's another skeptical view of the climate-hurricane connection from the conservative American Enterprise Institute. But Trenberth by no means alone in his view. Here's a very readable paper [PDF , download] on hurricanes and global warming that he co-authored with NCAR's James Harrell and Greg Holland, Robert Corell of the American Meteorological Society and Michael McCracken of the Climate Institute -- all of them highly respected scientists.

This debate matters, for obvious reasons: The human as well as the economic costs of extreme weather are staggering.

Those costs are rarely factored into the equation when opponents of climate regulation say that the U.S. economy can't afford to put a price on CO2, or switch to cleaner fuels. But they are undeniably real.

Greg Holland of NCAR, a hurricane expert, also made the case to reporters that climate change causing storms to be more intense. Citing an article in Nature Geoscience signed by 10 hurricane experts, at least one of whom had raised skeptical questions about mainstream climate science, he said: "Almost everyone is saying that the intensity of storms is increasing by five to 10 percent." (Intensity refers here to wind speeds.)

Rainfall, he said, is consistently projected to increase by 20 percent because of human-caused climate change. "There is no reasonable scientist who does not accept that," Holland said.

There's disagreement, however, about whether climate change is resulting in more frequent storms. He thinks the frequency is increasing, but says "good scientists have the opposite viewpoint." A summary of The Nature Geoscience report says that climate models actually "project decreases in the globally averaged frequency of tropical cyclones, by 6 -- 34 percent" by 2100.

How the economics of all this shake out is open to debate. Munich Re, the big global reinsurance company, estimated the costs of natural catastrophes in 2010 at about $130 billion. That figure includes major earthquakes in Haiti, China and Chile which have no connection to global warming, as well as the heat wave in Russia and floods in Pakistan.

The high number of weather-related natural catastrophes and record temperatures both globally and in different regions of the world provide further indications of advancing climate change.

Batten down the hatches, friends. Until we dramatically reduce greenhouse gas emissions -- and then for many years afterwards, because CO2 lasts a long time in the atmosphere -- the forecast is for more extreme weather.

How Climate Change is Already Affecting the World's Major Cities

Is there a link between global warming and Hurricane Katrina?

3 principles of resilience to keep heads above water