It’s the end of an era at Timberland, one of the most socially-responsible companies in America.

Family-owned since it was started in 1953 by Nathan Swartz, the grandfather of the current CEO, Jeffrey Swartz, Timberland is being sold for $2 billion to VF Corporation. VF is one of the world’s largest clothing and shoe companies; its brands include The North Face, Vans, Wrangler and JanSport.

What this means for the New England company’s well-known commitment to environmental responsibility and social justice remains to be seen.

Uncertain, too, is the future of Jeff Swartz, perhaps the most passionate advocate in corporate America for the idea that companies have a moral obligation not only to generate wealth for shareholders but to do good for the world. 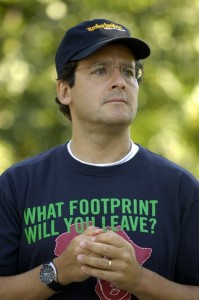 “This is hard,” Jeff told me when we spoke yesterday.

I’ve known and admired Jeff, who is 51, for about 10 years. I devoted a chapter to Timberland in my 2004 book, "Faith and Fortune: How Compassionate Capitalism is Transforming American Business." Back in 2000, when the company issued its first CSR report, Jeff wrote:

It is no longer enough to measure business by standards of profit, efficiency and market share. We must also ask how business contributes to social justice, environmental sustainability and the values by which we choose to live.

Because he’s outspoken, Jeff has had an impact bigger than the size of Timberland, which had $1.4 billion in revenues last year. To pick just one example: He pushed the outdoor industry to come up with an “Eco Index” to measure the environmental impact of their products (See my 2010 article, "Just How Green Are Your Hiking Boots? Industry Aims to Find Out").

It’s interesting — and very much in character — that as part of the acquisition Jeff didn’t negotiate a contract for himself to stay on at Timberland, either as CEO or as an adviser. Executives of companies that are being sold often do that, but they are, in effect, using the leverage they have during a negotiation to take care of themselves, potentially at the expense of other shareholders.

I called VF to ask what plans they had for Jeff.

“That’s something we’ll be talking with him about in the coming weeks and months,” said Cindy Knoebel, vice president of corporate relations at VF. That’s not exactly a vote of confidence, but one shouldn’t read too much into comments from PR folk.

The deal appears to be a good one for both companies from a business standpoint. That’s important, of course, because as CEO of a publicly-held company, Swartz has a fiduciary obligation to all his shareholders. VF agreed to pay $43 a share for Timberland, a 43 percent premium over its closing price of $29.99 last Friday, so his shareholders, including the family, will do well. Over the past year, Timberland has traded in a range between $15 and $45 a share. As is customary in an acquisition, several plaintiffs law firms are making noise about challenging the price.

As for VF, its shares rose by 10 percent after the deal was announced, adding about $1 billion to the company’s market capitalization. That’s unusual. When deals like this are made, shares in the buying company usually fall because investors believe (and rightfully so) that most acquisitions end up destroying value. VF says it intends to both grow Timberland’s sales and make the company  more efficient — Timberland’s operating margin was 9 percent last year, well below VF’s 20 percent.

One reason may be that Timberland goes the extra mile for its employees. They get 40 hours of paid volunteer time a year, and enjoy such perks as a $3,000 subsidy to buy a hybrid car. Fortune has long recognized Timberland as one of America’s best places to work.

On the conference call announcing the deal, an investment analyst asked VF CEO Eric Wiseman, “How do you bring SG&A (selling, general and administrative) down without hurting corporate culture?”

Wiseman replied that VF has supported other brands it has acquired over the years, and intends to do the same at Timberland.

“VF admired the Timberland brand for a long time. It goes back a decade and more,” said Wiseman.

In fact, VF approached Jeff’s father, Sidney Swartz, about buying Timberland back in the '80s. Nike and Adidas have also made overtures. “There have been plenty of other knocks on the door,” Jeff told me. Indeed, it’s possible that a rival suitor could emerge before the deal closes later this year.

Jeff said he felt optimistic about this deal because VF expressed strong interest in Timberland’s earth-friendly Earthkeepers line of footwear. “They believe that Earthkeeper is the heart of this company,” he said. VF executives told him that their research indicated that “outdoor products that perform that are also green are something that consumers value.” This was a business judgment, he noted: “They are not emotional. They are data driven.”

He also felt good after visiting a factory in Bangladesh that supplies product to both Timberland and North Face, and being told that North Face took the factor’s environmental and labor-rights performance seriously.

Another potentially encouraging sign: Last fall, when I met Conrad Anker, the mountaineer, author and environmentalist, he told me that North Face, where he has worked for 27 years, is getting serious about sustainability, lobbying for action on climate change and looking at the environmental footprint of its products.

Still, there’s little doubt that change will be coming to Timberland.

As Jeff put it: “When you change the signature in the bottom right corner of the paycheck, that means they will get to make decisions that I now get to make.”

What Does Timberland's $2B Sale Mean for Apparel's Sustainability?

Bottled Water is Way More Complicated Than I Thought

Just How Green Are Your Hiking Boots? Industry Aims to Find Out