How much carbon dioxide would be released if all the proven fossil fuel reserves owned by public companies was burnt?

How much carbon dioxide can we afford to release in the next 40 years to limit the probability of exceeding 2 degrees of global warming?

And that's before you worry about the government and privately owned reserves -- the total CO2 potential of all global reserves is 2,795 GtCO2. As a result, we can only afford to burn 20 percent of all proven reserves, according to our new research. 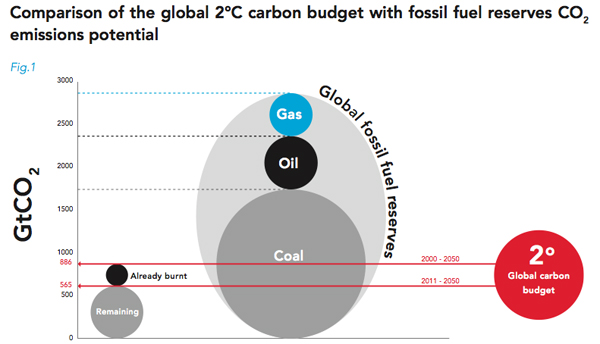 This illustrates how disconnected the world's capital markets are from any objectives to tackle climate change. It shows that the short-term profit based approach of today's financial instruments do not recognize the signals of long-term regulatory action to limit climate change.

This raises questions about the fundamentals of how we value companies based on their assets to derive a stock price. Companies are raising capital from the markets now to explore for more reserves to bring onstream in a decade or more, despite the fact we already have more than enough for the next 40 years.

Do you remember a few years ago when everyone assumed housing prices could only go up? The markets currently assume that carbon emissions can only go up, but governments have acknowledged the opposite is true. We have also seen that the market did not act to save itself, it merely started betting that it would go down.

If the carbon bubble is allowed to keep growing, and threatens to burst, there will be no altruistic response -- investors will lose and the planet will lose.

Why haven't we spotted this before? Part of the answer is the short-term incentives toward quarterly returns offered to those who manage our money. There is also a focus on last year's emissions and the annual flow of carbon into the atmosphere. We need to change our mindset to a long-term, forward-looking perspective of where these flows come from and the huge stores of reserves that are being built up. Perhaps truly integrated reporting will start raise questions about future climate risk associated with the reserves being booked as assets? At present we are monitoring the trickle coming from the bottom of the dam, forgetting the huge mass behind it.

Addressing this situation is also about a change in mindset. Looking at an individual company doesn't flag up any systemic issues. You don't realize your exposure to something until it goes wrong. Did people know what their exposure was to Gulf of Mexico deepwater oil drilling prior to the Deepwater Horizon disaster? Following the market indices is supposed to bring diversification through the spread across sectors. Yet some markets are becoming very extractives-heavy, which brings not only commodity and governance risks, but also a systemic carbon risk. London, for example, has seen 70 percent of its initial public offerings from the natural resources sectors in the first half of this year. 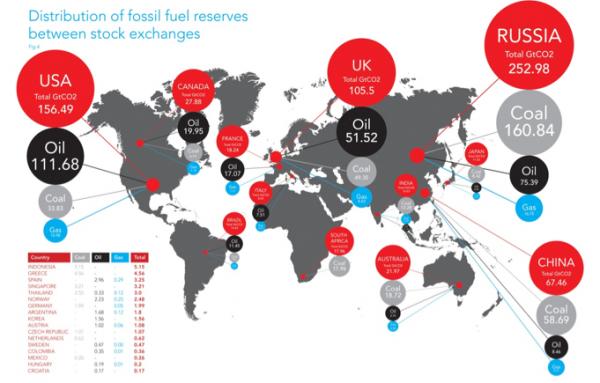 The map shows the huge CO2 potential being stored on the capital markets. The largest global investors have exposure across the world, as the assets that are listed on any stock exchange could be geographically located anywhere in the world. There is a clear connection between the capital raised in the global financial centers in New York and London, and the exploitation of fossil fuel reserves in China, India, Brazil and other rapidly developing economies.

Financing the transition to a low carbon economy will need capital, but at present the short-term cycle has locked much energy finance into extracting more fossil fuels, even though we are already over our limit.

Is Your Portfolio at Risk from the 'Carbon Bubble'?

How do you measure emissions locked in fossil fuel reserves?

How should investors look at stranded assets?