In noting the passing of Ray Anderson, the New York Times called him a "Carpet Innovator." Fair enough. The son of the southern working class who gained great success by his own sweat would accept that title graciously.

No, "Goodwill Ambassador" is the title I would give him, and not lightly.

In those three embedded words seem to be the essence of this born-again environmentalist who changed the direction of an entire industry: the belief in doing good, the will to see it through, and the skills to convince the rest of us to follow ... or lead ourselves.

Another American, a great American, had that title starting in 1956: Louis Armstrong. He was the exemplar of courage and consummate skill and he used those traits to show us that we ought to overcome our fears and love one another. 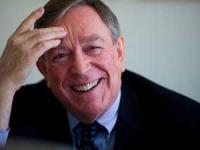 Mr. Anderson was famous for starting many talks by having everyone in the audience hug one another. Both men fought prejudices that run deep still, in arenas not for the faint of heart.

In the case of Mr. Anderson, it was the suicidal cynicism of corporate greed and waste, and he was tireless in his cheerful railings against it. Like Mr. Armstrong, however, it was in the leading by example that he built his legacy.

Profits went up, not down, when his Interface carpet company introduced its waste-saving measures.

Clients bought more, rather than less, of the new bio-inspired tile patterns.

Employees grew prouder, rather than more sullen, as the new protocols were put into place.

One key to his sustainability campaign's success, he said in a 2007 interview, was its comprehensive, across-the-board approach to the entire company.

"If you begin with a company and say, 'We are going to green this company by bolting on these green programs,' you are going to end up with costs up, not down," Mr. Anderson said. "We stepped back and said, 'Let's look at the whole system.'"

He had, incidentally, gotten a degree in systems engineering at Georgia Tech before coming to the carpet industry, so he was ready to apply a holistic approach to the problems he saw.

By his own admission, many of his innovations were modest and incremental, but in aggregate amounted to huge savings because they were connected to a plan of whole cloth. Some were pioneering, however. Among them was a little known concept called "biomimicry" and it was first applied to product design.

David Oakey was the chief product designer for Interface in 1998, and he started working with Janine Benyus, the now-celebrated author of "Biomimicry: Innovation Inspired by Nature." In her book, Benyus had written about the "organized chaos" of nature, so this newly interdisciplinary design team explored how nature might design a floor cover.

The team spent an entire day looking at the floor of a forest. They discovered that no two sections of the forest floor were alike, and, as a result, they designed a product called Entropy, in which no two tiles are alike. 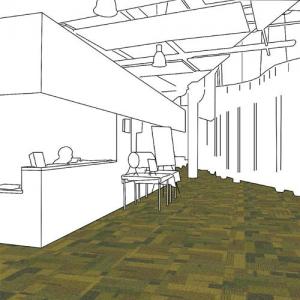 The benefits of this simple and clever idea were enormous. Since there was no perceivable pattern when the tiles were laid, a laborer could rotate each tile anyway he chose. Matching colors from different dye lots was no longer a problem, and replacing worn tiles became even easier since no pattern matching was required.

This was all good for the customer, the installer, and the manufacturer. From the strategic standpoint, it also produced less waste in many ways, including eliminating the need for so-called attic stock, tiles you must save in order to match color.

The i2 line of commercial carpet tiles of the InterfaceFLOR division, which includes "Entropy," is now one of the most-specified products in the company line, and it is estimated by the company that it produces 1.5 percent waste as compared with the 14 percent waste associated with traditional broadloom carpet.

Another product, TacTiles, is also loosely inspired by nature, and uses small adhesive squares, rather than beds of permanent glue, to affix the tiles to the floor.

Since those days, the company has refined its mission and collected an "Eco Dream Team" of advisors that includes Benyus and many other luminaries like Paul Hawken, whose book "The Ecology of Commerce" is credited with Mr. Anderson's oft-quoted "Spear in the chest" moment.

That epiphany, in 1994, eventually led to implementation of many initiatives at the company: Zero Waste, Life Cycle Analysis, Waste Equals Resource, Fair Trade, and, of course, throughout, Systems Thinking.

Indeed, the mission of the company is to demonstrate what sustainability is to the rest of the industrial world in all its aspects: people, process, product, place and profits.

Philip Levine is the new Poet Laureate of our country. He has written beautifully about the workingman of his native Detroit. In one of his poems a man stands in a factory work line and muses about his brother. It might represent the underlying motivation of all of Mr. Anderson's labor to help heal the earth.

How long has it been since you told him
you loved him, held his wide shoulders,
opened your eyes wide and said those words,
and maybe kissed his cheek? You’ve never
done something so simple, so obvious,
not because you're too young or too dumb,
not because you're jealous or even mean
or incapable of crying in
the presence of another man, no,
just because you don't know what work is.

Inside Interface's bold new mission to achieve 'Climate Take Back'

Why aren't there more Ray Andersons?