Why Sinking Solar Prices are Bad for Startups, Great for Enterprises

Why Sinking Solar Prices are Bad for Startups, Great for Enterprises

Every week for the last few months, we've seen news from solar manufacturers that are feeling the pinch from dropping polysilicon prices. The price of the stuff, the key ingredient in photovoltaic panels, has dropped 89 percent since February 2008, which is great news for the solar proponents cheering the drop as a major step toward grid parity.

But solar manufacturers have less to cheer from the news: Many are now struggling to make dwindling profit margins work. On top of falling prices, changes to feed-in tariffs in Germany and Italy have changed the business case for solar manufacturers selling there, catching some companies off-guard.

But all is not doom-and-gloom for the solar business: The more competitive market is playing to the benefit of some players. Utilities, for example, are finding themselves able to push forward with large-scale projects, emboldened by the sudden influx of cheap photovoltaic panels. Corporate purchasers are similarly able to make on-site solar projects pencil out in ways they just didn't two years ago. There are even a few bright spots for those manufacturers that know how to stand out from the competition.

Some solar manufacturers have managed to differentiate themselves via technology or innovative sales strategies. China-based Yingli, for example, targets sporting venues. Colorado-based Abound Solar produces Cadmium Telluride (CdTe) panels that can withstand incredibly hot temperatures; the company has shifted its focus from Europe to India, where that virtue is incredibly desirable.

"The only problem in India is that they can't get enough CdTe panels," says Julian Hawking, the company's senior vice president of sales and marketing.

In the United States, the drop in price for photovoltaic panels has been good news for the industry in general, not least of which because of a spate of announcements about major utility-scale photovoltaic projects, all more feasible now that PV has suddenly become affordable.

In just the past week, solar farms have been announced in Tennessee, California, and Florida, while Solar Millennium, the large California- and Nevada-based solar farm, announced its intention to shift 500 MW of planned capacity from concentrated solar power (CSP) to PV, citing the price drop as the driving factor.

"The cost reductions that are happening have a real material impact on utility-scale solar projects," says Dan Shugar, CEO of photovoltaic manufacturer Solaria. "Just to give you an idea of scale, there's like .3 gigawatts of PV operating in California right now, but there's 8.6 gigawatts contracted for from power purchase agreements [PPA], and over 10 gigawatts announced."

The drop in PV prices is also welcome news to enterprise buyers interested in owning their own on-site system.

"For some enterprise buyers the PPA model doesn't work. If you're a high-tech company like HP, Apple, or Google and you can't afford for your data centers to be down, you want the increased control over the system that comes with owning it directly," explains Peter Asmus, senior analyst for Pike Research.

In fact, sprinkled amongst the weekly announcements of lower-than-expected earnings from solar manufacturers, news of enterprise solar installations has been increasing. Darden Restaurants, which owns Red Lobster, Olive Garden and a number of other restaurant chains. announced this week its intention to move forward with a 1.1MW installation at its headquarters near Orlando, Florida.

According to spokesperson Rich Jeffers, the company had designed its new LEED Gold-certified headquarters to include solar two years ago, but when an acquisition led to the need for additional square footage on the building, the solar plan was put on hold. Recent price drops helped the project get moving again.

"Lower pricing certainly didn't hurt," Jeffers says. "We're a company that builds a lot of facilities, so we've seen in the past couple years the costs of building come way down and that's enabled us to move forward with growth in terms of new restaurants. We've seen it in this solar environment as well and it gave us the opportunity to move forward a bit. "

The rooftop solar installation will not only help achieve Darden's emissions reduction goals, it also stands as a visible testament to its sustainability commitment. Built on the top floor of a four-story parking garage, the system will be viewable from the 528 expressway, used by thousands of visitors and locals each day.

Next page: The other business benefits to solar installations

According to Pike's Asmus, in addition to the marketing benefit of an on-site solar system, a solar installation provides significant business benefits. There's the draw of having reliable power for operations, of course, but having an on-site system also enables companies to build their own microgrids, effectively creating a power island impervious to any brownout or blackout that might plague the grid.

And PV in particular comes with flexibility and maintenance benefits as well. "The military is really into on-site solar, particularly PV, both because of the microgrid capacity and because it's easy to install and requires little to no maintenance -- it's 'Private proof,' [that's idiot-proof for civilians] as they say."

For IKEA, a company with a long-time commitment to sustainability, on-site solar has been a natural fit, and plummeting prices only make for a sweeter deal.

"At IKEA, we're very much of the mindset of controlling our own destiny: We always purchase our own land and own our own buildings, so once we became interested in solar, we were very much interested in owning our own systems," says Joseph Roth, director of public affairs for IKEA. "The situation now, with the prices dropping, works out much better for us." 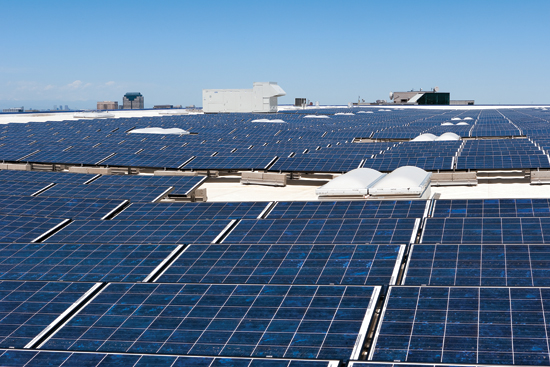 According to Roth, it's not just that the panels themselves are cheaper, but that there are more providers and installers out there than before, which makes for a more competitive marketplace and creates deeper expertise ... both situations that deliver benefits to enterprise buyers.

"It allows potential solar purchasers to really have a good pool to choose from when selecting their provider," Roth says. "We're able to do more solar now because of all of these factors coming together."

After testing on-site solar out at its Tempe, Ariz. store in 2010, IKEA made a commitment to roll it out to several stores across the United States, including its new Denver store, where solar was baked into the construction process. The Denver store also incorporates geothermal power as part of its heating and cooling systems.

Holding out on solar? It's time to reconsider