Method, the company that used green chemistry to turn age-old concepts for making and marketing soap on their head, has come up with another innovation that explodes a long-held idea -- that the trash trapped in the North Pacific Gyre is unredeemable.

Working with Envision Plastics in Southern California, Method came up with a model for collecting and upcycling some of the debris that's swirling in the currents of the gyre, a swath of ocean covering 20 million square kilometers.

By some estimates, the amount of plastic awash in the ocean is twice the size of Texas and in some areas the ratio of plastic to plankton is now 10 parts of plastic to 1 part of plankton, according to Jared Blumenfeld, the head of the EPA in the Pacific Southwest.

"We asked ourselves, 'What if we could take some of the plastic that's floating in the North Pacific Gyre and make bottles out of it?,' " said Adam Lowry, who founded Method 10 years ago with business partner Eric Ryan. "Well, we did it." 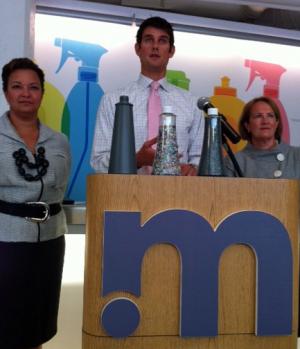 The "ocean bottle" is 100 percent high-density polyethylene plastic, 25 percent of which comes from plastic from the gyre, according to a post by Lowry on the Envision Plastics website. Method plans to take the bottle to market early next year with a major retailer, whom Method isn't naming for now.

Method's new plastic ocean bottle is on the far left of the lectern in the picture to right. The bottles beside it contain bits of plastic from stages in the recycling process.

That's Lowry behind the lectern with Jackson and Mills. The two were in town to spread the word about getting the country back on track with the president's proposed American Jobs Act, which proponents say would help put more people back to work and help the ones who have jobs by cutting the payroll tax that comes out of their paycheck.

Method, a small but growing business with high profile products made in the U.S., has a history of innovation and success -- all of which bolstered the Obama administration's message brought by Jackson and Mills.

A scientist, Jackson noted Method's work in green chemistry, water management, innovation and resource-conscious packaging. (Nearly all of the bottles the company uses are made from 100 percent post-consumer recycled plastic, Lowry said.) Jackson dovetailed that praise with a call for chemical reform, water protection, job development and pollution prevention.

The company, she said, is "just one more example of how we can innovate our way to a prosperous future."

Method's introduction of the ocean bottle comes just two days before California's 27th annual Coastal Cleanup Day. The intent behind the ocean bottle, however, isn't to undertake the vast task of cleaning up the gyre, said Lowry. "The real goal is to raise the awareness of plastic pollution," he said.

The ocean bottle's also unveiling coincides with the publication of "The Method Method" by Lowry and Ryan, who tell the story of their company. GreenBiz hopes to soon provide excerpts from the book.

In the meantime, articles about the company, its products and approach to innovative design are available at GreenBiz.com.

The Evolution of Laundry Detergent

Soap and Glory: A Peek Behind Method's Methods