Imagine that you lived in a world where the trajectory of personal consumer choice had approached its zenith. Information, sustenance, and shelter, even, could be chosen and adjusted by individuals and coordinated within the community for, if not optimum good, at least for minimum conflict.

Most objects that you would come in contact with would be "smart:" adjusting functions to you, rather than the other way 'round. In your home, chairs would re-form to fit your spinal structure, room dividers to your spatial needs, building facades to your preferences for sun or shade, indoor or outdoor, enclosed or open, Queen Anne or Moderne.

Perhaps one of those features of your home would be color, and perhaps you weren't satisfied with the deep burgundy that was on the dining room walls. In our imagined (and not so distant) future, you would be able to change that at the light switch, selecting a new hue from a color wheel or maybe a complex tromp l'oeil from an uploaded image.

The new method would bend the light that strikes the wall surface… to your will, virtually. Like the rainbow, your new wall would break up the white light that shines on it and selectively shine back the colors that you wanted, where you wanted them. Amazing? Wondrous? Impossible?

Actually it's being done routinely right now, and the process is not that different from that of its natural inspirations, beetles, butterflies, and birds. It's called structural color and is responsible for the brilliant hues seen on the Morpho butterfly, or the oil-slick colors of a beetle's shell, or some of the iridescent colors of many bird feathers.

When white light, made up of colors of different wavelengths, shines on any of these creatures it strikes a convoluted surface. Had the surface been uniform at the wavelength scale then the light would have been reflected with all its component colors, and their signature wavelengths, in phase. This would produce so called "white" light.

Like the jump ropes in a game of Double Dutch, some of the reflected colors are in sync, or phase, and some are not. Those that are not will cancel each other out; this is called "interference." Those that are in phase will make an even brighter color. The intense colors of Peacock feathers are a good example.

The MEMS Technology unit of Qualcomm has devised a way to mimick this process and they have branded it the "Mirasol" technology. They have applied it to the display screens of mobile devices, but there seems to be no reason that its applications could not be broader.

The MEMS unit sponsored my class at U.C. Berkeley this spring, for which I am grateful, but I am not obligated to write an advertisement for them here. Their product is worth knowing about because it is a rare example of a direct observation of nature and a clever translation to a useful product. Like all such innovations, it was not easy, cheap, nor quick. 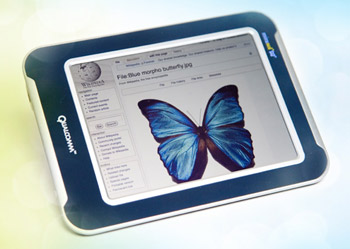 A butterfly wing, of course, is completely different than the substrate of an electronic display, so it is useful to compare the two "technologies."

First off, the ultimate outcomes of the effect are not the same. Sexual selection and reproduction, intra-species communication and camouflaging appear to be the main functions of butterfly color.

For example, in some species color signalling is in the eye of the beholder. The same wing is perceived as background green by predators limited by their range of sight, while other butterflies can see a bright (linearly polarized) blue. 'a very handy survival trait to have.

Secondly, the materials and methods used in construction are completely different. In the butterfly, the layers of overlapping scales have been formed from individual cells in the wing's epithelium, starting in the larval stage. These cells flatten, elongate and then develop patterned structures on their surfaces. The growing cell secretes these cuticle structures as a liquid that hardens as the cell dies back into the epithelium of the wing. Researchers believe that elastic buckling is key to achieving the period necessary to interfere with the wavelength in some species. Other species grow a three-dimensional network of endoplasmic reticulum to form a photonic crystal. The general results are the same.

The patterns formed on the cuticles of the scales are various series of ridges and cross-ridges with as many as 10-12 layers of "shelves." The spacing between the chitin shelves and air spaces is in the range of 0.5 to 5 microns and the scale of these gaps is a critical match to the color wavelengths. Chitin is the hard material of choice in the invertebrate world, a long-chain polymer derived from glucose.

The hardware engineer's goals, of course, are very different from the butterfly's. In the highly competitive visual display market competing technologies all seem to sit on the edge between runaway success and obscurity. Advantages of one system seem to be balanced with limitations.

For example, Liquid Crystal displays (LCD's) are bright but power hungry. Electrophoretic (E-ink) displays use less power, but are slow to refresh, and it is not certain whether they will be able to support video color on low power. Key concerns for the developer are energy use, visibility, and consistent color for both still and moving images; all must be in a user-accepted form at low cost.

Qualcomm uses a so called IMOD (interferometric modulation) technology to create its color. In plain English, the technique adjusts precisely the color wavelengths that will be cancelled out by interfering with each other. The remaining color is what you will see.

To do this two plates are sandwiched with a tiny separation between them. A thin-film stack on a glass substrate is above a suspended reflective membrane. When an electrical charge is run through the array electrostatic attraction brings the plates together. All the light colors are absorbed and you see black.

When the charge is released, however, one of three width gaps results, corresponding to the red, green or blue wavelengths. Combining these shown colors in a pixel array can create any color desired. These plate gaps can be adjusted one thousand times a second. The technique is bistable, and therefore uses low power; energy is used to make changes but not maintain states.

I point out to my students that this technology is not trying to recreate an epithelium, but that engineers have abstracted the principles of the butterfly color phenomenon and applied achievable methods and materials to produce the same effect. In this case, the manufacturing processes of the silicon wafer industry are used to great advantage.

Because it is modular (another of nature's lessons), it appears to be eminently scalable, and I can see no reason why it couldn't be used eventually to improve wayfinding in the London Tube, or emergency signaling for ships at sea, or chemical detection warnings in plants.

Less dramatic, but perhaps more important is the role that this kind of technology could play in the shift from our current throw-away culture toward the return to more durable goods. As my former contractor said to me about replacing some things in my home, "Lots of things don't wear out; they 'ugly' out."

I wonder what percentage of objects we would keep years longer if only we could keep their colors bright and change them at will? To be sure, the silicon wafer industry is not known to be either the cheapest, or the most environmentally friendly, but perhaps those two lines of green will meet on the boardroom chart someday.

The bio-inspired technological innovation of the IMOD technology is, without question, an impressive feat, but it remains to be seen how widespread its adoption (and economic success) will be. Steven Vogel, author of Cats' Paws and Catapults, reminded me recently that design history is littered with examples of products that got an "A" in innovation, but an "F" in the market.

"On various occasions, some wonderfully clever, pathbreaking bit of technology has made its appearance, sometimes after absorbing quite a pile of development money," Vogel said. "The device then disappears again as a complete economic failure at its time and place. The moral for biomimeticists is that clever emulation of a natural device does not in and of itself, bring home (the) bacon."

He went on to list Brunel's pneumatic railroad, the Flettner ship, the supersonic transport plane, the Stirling engine, and analog computers.

Personally, I think the IMOD technology will stick around; it's too beneficial to be abandoned because of the vagaries of any one limited market. Besides, I would like to change the color of my dining room whenever I wanted. Wouldn't you?