There are many visions for cities of the future, as GreenBiz colleague John Davies noted in a blog earlier this week. But idea of a smart, connected urban environment is central to those views.

GreenBiz Group's term for that highly connected world is VERGE, and a forecast just out from Pike Research says the market for technology to support such a world is expected to grow to $16 billion in spending annually by 2020.

From 2010 to 2020, total investment in smart city infrastructure is expected to reach $108 billion.

"No single technology defines the smart city, except perhaps ubiquitous broadband communications," the report from Pike says. "However, a number of iconic technologies can be highlighted as key components of the smart city vision. "

They include the solutions that make smarter buildings, utilities, transportation and government (think public works, safety and emergency services) possible. Here is a chart from Pike that shows the projected growth in those areas across the decade. 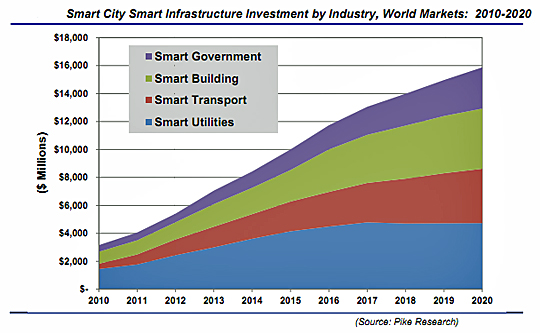 Access to information, basic data analysis and people in real time have already become table stakes for connectivity in today's world. So smart cities will have to deliver more in the not-so-distant future. Here's how Pike Senior Analyst Eric Woods, co-author of the smart cities report, put it:

"Information and communications -- particularly ubiquitous broadband Internet access -- are vital elements in any definition of the smart city. But a city only becomes smart if it can make use of these capabilities to deliver real-time services based on the capture of information."

To that end, expect a sharp increase in the use of sensor, monitoring and communications technology to help cities work better, according to the report. The applications run the gamut from lighting, traffic and transportation systems to energy, water and building management solutions.

Pilots of smart city systems are underway, as GreenBiz reported when several initiatives launched in 2009 and more recently this past spring when IBM rolled out a number of new solutions and projects.

This week, IBM and San Francisco-based firm Streetline partnered up to offer smart parking and traffic solutions that have sensor technology at their core. Streetline introduced the concept in Los Angeles last December. Sensors placed on the ground in parking spaces and in meters help drivers find street parking with the aid of a smartphone app. The system also helps the city get a better idea of traffic and parking patterns, the aim being better planning and management to ease congestion.

Pilots are good thing, "but they need to be put in the context of a broader vision for the city is trying to achieve," the report said. "The biggest test for the smart city concept over the next decade is to show that innovative projects can be deployed as a citywide scale and are also replicable across cities."

The research from Pike is the second report this month to forecast a surge in smart city investment. ABI Research pegged today's market for smart city technology at more than $8.1 billion and projected that spending will reach almost $40 billion by 2016.

I've asked Pike to weigh in on the chasm separating the two market projections; I'll update this article with any details I get from them.

Update: Woods, who is based in the U.K., provided this response by email the next day:

"As ever with forecasts it all depends on the scope and inclusions -- and that's particularly important with smart cities -- as you know there a lot of different definitions/uses of the term out there.  If you include some of basic urban infrastructure investment in China and India for example, then you can get some huge numbers.

"So from what I can see, ABI have simply taken a broader scope on what to include in the forecast -- just looking at their TOC for example it would seem to include electric vehicle sales, which we don't include (we do allow for investment in electric vehicle charging equipment though). In general our focus was on the technology investments that are coalescing over time into smart city capabilities (which I think is close to your VERGE concept), and we avoided just aggregating all spending that might occur within an urban setting.

"Going forward I think it's the interplay between smart energy, buildings, transport and government services that gets really interesting -- and of course the issues that raises about where the priority investments need to be made. As that progresses, we will get more insight into how the smart city is developing as a market for specific technologies."

Get Ready for a New Kind of 'Smart Meter'