A Hunt Where Efficiency is the Prey

A Hunt Where Efficiency is the Prey

Companies usually pay workers to keep facilities running. But some firms are learning that making teams of their employees stop, listen and look around for waste can pay dividends toward the bottom line.

A growing list of companies are turning their employees into sleuths tasked with a single purpose: to identify and quantify opportunities to save energy. The process is called a Treasure Hunt, and over the last decade, more than 200 of the events at GE have uncovered $150 million in energy savings.

As a way to differentiate itself from other lenders, GE Capital, Americas, GE's commercial lending and leasing arm, offers its best customers many services through its Access GE program, including training and assistance in conducting Treasure Hunts, which were originally developed by Toyota. Just last month, GE Capital announced the results of a Treasure Hunt it conducted at one of its customers' facilities. The exercise, at Exopack's facility in Griffin, Ga., ended with a road map of energy efficiency projects that, if implemented, could slash the plant's energy costs by 30 percent.

"We uncovered well over $400,000 of quantified opportunities to reduce energy spend at that plant," said Paul Kearns, vice president of marketing for Exopack's performance packaging business. "The energy spend at that facility is probably a combined $1.5 million on the year, so that's a significant number of reduction opportunities that have been defined and quantified." 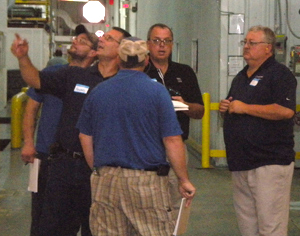 When I spoke with Kearns after the Exopack Treasure Hunt, he shared with me how he pitched the event to participants during its kick-off.

"Today if we don’t do anything and energy prices keep going up, our costs are just going to go up at the same rate as energy prices, because even the raw materials derive from oil," he said.

"What we wanted to do is try to reset that slope, so at least in terms of the energy we buy, we could make more and consume less," he added. "That was our objective and thereby hopefully create a competitive advantage, or a cost advantage, for that location."

Nearly two dozen people were involved in the Exopack Treasure Hunt, a mix of workers from the Griffin facility, a few from other facilities, external vendors and representatives from the Access GE team.

Over the course of 2.5 days, three groups (motors, electrical/lighting and compressed air/HVAC) scoured the facility looking for waste and ways to save energy while the plant went through three production modes: shut down, start up and full production. Kearns told me that out of 70 different projects identified, only 16 had payback periods exceeding one year.

Among projects discovered during the Treasure Hunt:

• Lighting sensors will be installed in low-occupancy areas where lights are now on around the clock.

On some level, all of these projects had been discussed at different Exopack locations, Kearns said, but having all projects quantified on one list gave the company a powerful tool for its energy management program.

"There's something to be said for putting them all on a list with numbers, and having that kind of work done so as funds are available, you can just start picking off the list," Kearns said.

Putting the Treasure on the Map

Most ideas that come from Treasure Hunts are not unique and have been kicked around some time in the past, according to Howard Mikytuck, a member of GE Capital's Access GE team, but they become more compelling when the numbers are crunched to reveal the potential savings.

"I think the value we bring is the quantification around what the current state really is costing, the potential future and the return on investment," Mikytuck said. "We've noticed just from doing this, we found about 70 percent being process-related and 30 percent being product related, such as upgrading or moving toward a new technology. Lighting is a good example of product-like changes, because of the advances made in lighting." 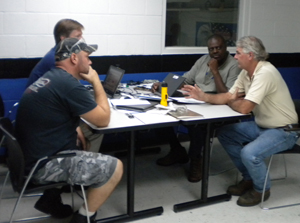 Like many small companies, Exopack doesn't have any staff strictly focused on energy management. Instead, its operations and maintenance teams focus on keeping equipment running.

"[They] don’t always have the luxury of saying, 'How can I do that more efficiently?'" Kearns said. "That's where if you just stop a little bit, and maybe just take this little bit of time out in a concentrated event like this, you can get that prioritized list set up, so you don’t have to ask those questions anymore, you just start knocking it out."

Already the Treasure Hunt will impact policies at Exopack to encourage continuous improvement, in terms of its motors. When motors go out, the initial quick reaction is to get the equipment back up and running as soon as possible. Speed, not efficiency, is top of mind so the replacement may not be the most efficient option. Now the facility will develop a motor replacement policy that also takes efficiency into consideration.

Exopack previously had energy audits performed at its facilities with mixed success, Kearns said, leaving a bad taste in some people's mouths. In contrast, Exopack workers appeared to embrace the Treasure Hunt.

"I was pleasantly surprised at how engaged the teams were over the course of the 2.5 days," Kearns said. "It is hard to keep people interested in something like this for that long, but they were working right up until the end, which indicates to me that they saw value in it and that they were interested in making progress. What I hope to see is that behavior continue and spread throughout the rest of the organization."

The engagement component is key to a successful Treasure Hunt, said Beth Trask, deputy director of the Innovation Exchange, a project of the Environmental Defense Fund (EDF) that works to share sustainable best business practices with industry. EDF and GE are testing the Treasure Hunt process at various sites and will co-produce a Treasure Hunt checklist later this year. Trask knows of one company that will hold its own Treasure Hunt to engage employees and test the methdology in an office environment.

If companies choose to do a Treasure Hunt for engagement purposes, she said, they need to take it seriously.

"Let employees take the time to do this," Trask said. "Free them from their daily responsibilities to do this. Commit to seriously considering all project ideas that come out this and commit to implementing something right away to keep the momentum going."

Buy-in from the top is critical, said Bruce Bremer, an energy consultant who, after 22 years of service, retired earlier this year from Toyota, which developed the original Treasure Hunt methodology more than a decade ago and shared it with GE. Executive buy-in will help to ensure that Treasure Hunts become a permanent tool in a company's energy program, Bremer said, and that the projects identified will be implemented. Integrating energy efficiency into a company's culture also stands a better chance if company leaders are committed.

"The intent was to teach our members how to build energy into our culture of continuous improvement," Bremer said. "The reason we called it Treasure Hunt was because of that. We didn't want to call it an audit so that sounded like the IRS and we're really there to help and make it fun."

How to Conduct a Treasure Hunt

Inside an Energy Treasure Hunt at the Citrus Bowl

A New Corps for a Green New Deal