There's a saying in journalism that it takes three examples to make a trend story. So when we saw three simultaneous news items about electric buses cross our screens this morning, it was a given we'd look into it. Whether this is just a strange coincidence or beginning of a longer-term trend remains to be seen, but here's a look at what's about to hit the streets.

First, you may have heard that BYD, a China-based, Warren Buffet-backed player in the EV and solar energy markets, made its North American arrival with a new headquarters based in Los Angeles.

BYD, which stands for "Build Your Dreams," also announced that it would supply Hertz Car Rentals' Los Angeles Airport (LAX) facility with an eBUS-12 to shuttle rental customers between its facility and the terminal. The all-electric bus can drive 155 miles on one charge and may generate lifetime savings up to $500,000," Richard Broome, Hertz's senior vice president of corporate affairs and communications, said in a statement.

The 42-seat vehicle can drive 120 miles on one charge, with a top speed of 50 miles per hour. The model is said to operate at one-third to one-half the cost of its traditional diesel counterpart.

Proterra's flagship product is EcoRide, a battery-powered electric bus that can charge in as little as 10 minutes. The vehicles are already operating in Pomona, Calif. 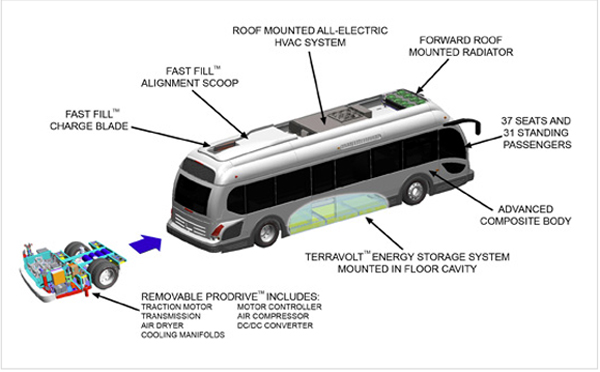 But in a sign of its business picking up steam, Proterra also recently penned a deal to supply Tallahassee, Fla.'s transit provider with three EcoRide models. The zero-emissions buses may also hit the roads of Fresno, Calif., San Antonio, Texas, Seattle, Wash., Chicago, and Reno, Nev.

BMW gears up for electric buses with Proterra investment