Editor's Note: Updated with comments from the certification ceremony and interviews, plus more photos.

The 48-story building, already the possessor of a LEED-Gold green building rating, now is certified at the highest level possible by the U.S. Green Building Council -- LEED Platinum. Owner Transamerica Pyramid Properties and its building management team at Cushman & Wakefield marked that achievement in a ceremony this morning.

Earning LEED-Platinum certification as an existing building requires collaboration on all fronts and leadership by all involved, Geiger said. "It's a continuous process ... and no one person is responsible. It's everybody, from the owners to the janitors, the security guards, the managers and the consulting firm," he said, in awarding the plaque. "This is recognition of their leadership."

What It Took to Green the Pyramid

Completed in 1972, the Transamerica Pyramid is 853 feet high with 530,000 square feet of space. Its first LEED rating -- LEED stands for Leadership in Energy and Environmental Design -- came in 2009 after about a decade of renovations that were aimed at making the building more efficient. 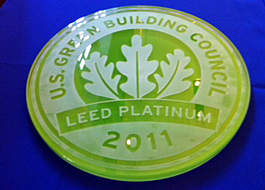 The work included installing a cogeneration plant that now supplies 70 percent of the building's electricity and 100 percent of heating, including the energy needed for hot water. The cogen system saves the building owners about $700,000 a year in energy costs. The building owner and managers also embarked on aggressive water-saving and waste reduction programs to earn the first LEED rating.

Those efforts accelerated when the owner and operators decided to shoot for LEED-Platinum status. In the process, the Energy Star score for the building rose from 77 in 2009 to its latest score of 98, which means the building is among the top two percent of high-performing energy saving structures in the country.

The energy and water efficiency measures have produced $2.5 million in savings on electricity, gas and water costs over the past four years. And the cost for waste collection plummeted by 73 percent in the past three years as a result of a recycling and composting program that diverts 70 percent of material otherwise destined for landfill.

To top it off, the building's shape and its white precast quartz aggregate exterior provide the same benefits as a cool roof by reducing the need to cool the building and by diminishing the heat island effect caused by a concentration of dark-colored surfaces (think: traditional roofs, roads and parking lots) in urban areas. 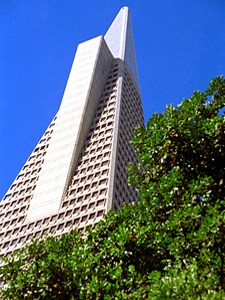 Taking a Lead in Energy Reporting

In addition to the platinum-level green building certification, the property owner and managers of the Transamerica Pyramid have achieved another important, but less touted, milestone: They are among the first to comply with San Francisco's new ordinance requiring energy performance reporting by commercial buildings.

Earlier this year, San Francisco joined the ranks of the small but growing number of U.S. cities that have adopted measures requiring energy benchmarking, auditing and reporting. It is part of a larger nationwide effort, which includes the USGBC, the Institute for Market Transformation and the Clinton Climate Initiative, to improve the energy efficiency of commercial buildings.

Buildings account for about 40 percent of energy consumption and carbon emissions in the U.S. And as Capital-E noted in its recent report, "building energy efficiency is the single largest, low-cost opportunity for CO2 reductions."

In San Francisco, buildings are responsible for 50 percent of greenhouse gas emissions, and lowering building energy consumption is key to achieving the city's ambitious goal of reducing GHG emissions by 20 percent compared to 1990 levels by the end of 2012, said Melanie Nutter, the director of the city's Department of the Environment.

San Francisco is making headway toward its goal, she said, noting that the number of LEED-certified buildings has grown tenfold in just a few years. There are now 152 LEED buildings in town and 13 are certified at the platinum level. San Francisco was recently named the greenest city in North America and, for a second year in a row, the best market for green building opportunities, Nutter said. She credited those accolades to the private sector's work to improve building performance in concert with the city's environmental programs, resources and policies for greening commercial buildings, including the energy performance ordinance.

The measure covers commercial properties that are at least 10,000 square feet and affects some 2,700 buildings totaling roughly 160 million square feet. Starting this month, buildings of 50,000 square feet or more must submit energy performance benchmarks to the city. That provision applies to about 850 buildings, which encompass about 75 percent of the commercial building square footage in town, said Barry Hooper of the Department of the Environment's Private Sector Green Building Program. The Transamerica Pyramid is among the 125 big buildings that have submitted their benchmarks to the city; the requirements to benchmark and periodically audit and report building energy performance are rolling out based on building size through 2013.

"The story behind this policy is that there is an opportunity for any building to improve," said Hooper. The greater aim of energy reporting is for building owners and operators to gain information about how their properties are performing, realize the value of that data and take action on it, he said. "The goal is market transformation," Hooper said. "Energy is often a mystery to building owners and operators. The people who pay the bills are not always the people who manage the building."

Pushing the Envelope on Building Performance

Cushman & Wakefield was one of the major players in San Francisco's commercial building market that worked to bring property owners, managers and anchor tenants together on issues of building performance.

The energy performance ordinance, resources for green leasing and an efficiency financing program are among the initiatives that stemmed from the city's Task Force for Existing Commercial Buildings, which was co-chaired by Cushman & Wakefield's Steven Ring.

Asked what it will take to raise the performance of San Francisco's commercial buildings, Ring replied: "Leading by example."

Along those lines, Cushman & Wakefield manages 32 properties in San Francisco, all of them have benchmarked energy performance, the company worked with 12 to earn LEED certification, and two of them hold LEED-Platinum status -- the Transamerica Pyramid and the historic building at 601 Townsend Street, the 1905 building now occupied by Adobe Systems.

"It's not just us," said Ring, pointing to the growing number of LEED commercial buildings in the city and the property owners and managers who are working to increase building performance.

Education is the key to getting more people on board. "Once they understand what it is, it's not as difficult as it seems," Ring said, adding that the commercial building task force crafted its recommendations with that in mind. He said the group recognized that the solutions they advised had to be "achievable, simple and easy to understand," to gain traction in the market and buy-in for the idea that continuous improvement is essential to becoming a high performance building.

Barry Giles, the founder of BuildingWise, underscored that point at the ceremony in praising the Transamerica Pyramid team for earning LEED-Gold certification and stretching for the next level. "They took the initiative and made the commitment to go and do it all over again," Giles said. "They stepped up."

He also put the day's events in perspective. Like other speakers, Giles noted that San Francisco has made progress but still has much work to do to green its commercial buildings and ensure that improvement doesn't stop when a milestone is reached. "The plaque on the wall is just a piece of glass," Giles said. "It's the building attached to it that's important."

Behind the Top 10 List for Green Building Markets: How SF Made No. 1