Americans are finally showing significant awareness of the impending phaseout of commonly used incandescent bulbs in a move toward more energy efficient lighting.

Fifty-five percent of the people responding to the latest Socket Survey by Osram Sylvania said they knew that most traditional incandescent lightbulbs would be eliminated over the next three years.

It was the first time in the history of the poll that more than half were aware of the policy resulting from the Energy Independence and Security Act of 2007.

Nevertheless, U.S. consumers remain hazy about the specifics of the policy and the legislation behind it. Just 29 percent knew that the gradual phaseout begins this coming January 1, when traditional 100-watt lightbulbs will no longer be made.

And despite greater general awareness of the policy and its aim to increase energy efficiency, more people have been using incandescent bulbs lately. Here is what respondents said when asked what types of bulbs they now have in their homes: 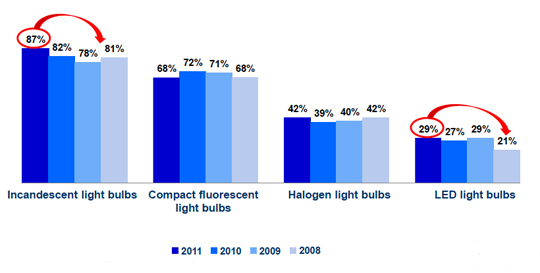 Researchers also found that an increasing number of people also say they plan turn to lower-watt traditional bulbs when the 100-watt ones are no longer available, instead of buying more efficient lighting technology such as CFL, LED or halogen bulbs. Here's what people said they are most likely to do when 100-watt bulbs are no longer on store shelves:

The mixed results peppered the fourth annual Socket Survey. Perhaps the best explanation for the gap between awareness and behavior is the concern about price. It has consistently been one of the top three considerations for people when buying bulbs. Although the No. 1 and No. 2 concerns continue to be brightness of the light produced by any given bulb and their lifespan, the price factor has edged up with 88 percent now saying it is important. By comparison, 87 percent found it an important consideration in 2009 and 2010; in 2008, it was 83 percent.

The survey can be downloaded for free at www.sylvania.com/socketsurvey.

Photo of lightbulbs via Shutterstock.com. Charts courtesy of Osram Sylvania.

Lights Out for IKEA Incandescent Bulbs

More Americans Give Green Light to Energy-Saving Bulbs, But Are Dim About Urgency to Switch