The 2011 Los Angeles Auto Show brought design, engineering, and performance back to the forefront of the discussion about new cars after a couple years of making “green” the star of the show. The biggest manufacturers showcased sleek new sedans like the Cadillac XTS, redesigned SUVs like the Ford Escape, and concepts like the Subaru BRZ STI (a joint venture from Subaru and Toyota). This show also saw the emergence of a new competition among the German automakers.

Additionally, two awards were announced at the show. Ford took home “Green Marketer of the Year,” and the Honda Civic Natural Gas came away with the “Green Car of the Year” prize. 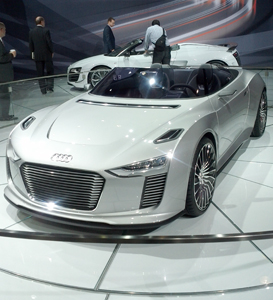 BMW came out of the gates first, unveiling its already well-known i8 (pictured above and at left) and i3 concept cars. While many electric vehicle enthusiasts have been tracking these cars closely, for the first time, BMW confirmed that both of the i-concepts would become production vehicles in 2013 and 2014.

The i3 is an urban “megacity” vehicle, with a 100-mile range and 4-hour charge time. The i8 is a hybrid all-wheel drive sports car, driven by both an electric motor and a small, turbocharged combustion engine.

Additionally, BMW announced December 2011 shipments of the Active E, upcoming ActiveHybrid versions of 3- and 5-series vehicles, and an increased stake in SGL Carbon, a maker of lightweight parts. BMW put a stake in the ground as the number one premium vehicle manufacturer shaping the future of mobility.

Audi quickly followed BMW’s announcements with Peter Schwarzenbauer’s proclamation that “technology has the power to make mobility as sustainable as it is exciting.” Audi spokesmen Schwarzenbauer and Johan de Nysschen went on to describe the progression from “more efficient to sustainable to carbon neutral mobility” as a corporate goal at the carmaker. They also described the strategy behind developing everything from clean diesel engines to hybrids, pure electric vehicles, and hydrogen-fueled vehicles. 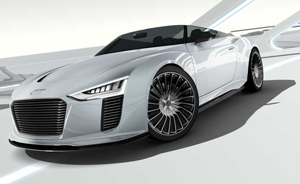 All of this build up led to the introduction of the e-tron Spyder (at right), first revealed at the Paris Motor Show, to the North American press. The e-tron Spyder boasts a diesel, plug-in-electric hybrid drivetrain, capable of 105 mpg. Even more exciting, Audi announced that this car will go into production in 2012. Sitting next to the e-tron A3 concept, it looks as if Audi is fully committed to development of hybrid electric vehicles.

Back to the Basics, Now Including Green

Even with the focus clearly on traditional measures of automotive excellence -- design, engineering, and performance -- sustainability found its way into the conversation in a much more integrated fashion across the major automakers.

This made clear that increased fuel economy and alternative propulsion systems are no longer spectacles at auto shows, but are instead ingrained into the development of all new cars.

Among the other highlights from LA:

A Hum on the Autobahn

BMW and Audi have committed to the emergence of premium electric and plug-in-hybrid electric vehicles with their newest offerings and concepts, as shown at the 2012 LA Auto Show.

Porsche, with its current hybrid Panamera and Cayenne offerings, and the 911 GT3 R Hybrid with a flywheel generator, looks to be dipping its toes into the hybrid and electric vehicle market as well.

Finally, Mercedes-Benz has its AMG E-cell, first shown in Detroit, looking like it will get the green light for development next year. With a little bit of time and adoption of technology, it might be the hum of an electric motor you barely hear while driving on the German autobahn at 150 km per hour or the streets of America at 60 mph.