After working quietly to set sustainability goals and begin pursuing them, The North Face is now detailing its trek toward a greener supply chain and operations in the company's first corporate social responsibility report.

The outdoor apparel and gear firm wants at least 65 percent of the fabric it uses to conform to the bluesign sustainability standard for textile production by 2015. The company says it is advancing steadily toward that goal: After two years of working with major suppliers to apply bluesign guidelines, 27 percent of the fabric used in The North Face products meets the standard.

The figures are part of the progress charted in the CSR report for The North Face that is being published today. The company also is releasing a series of videos that highlight joint efforts with key suppliers.

Here is the first video in the series:

"We've taken the approach of going after our biggest impacts … and those are in our supply chain," said Adam Mott, corporate sustainability manager for The North Face.

Production and manufacturing of materials account for about 75 percent of the environmental impact of the company's products, said Mott, who gave GreenBiz.com a preview of key elements in the report and talked to me about what prompted The North Face to start telling its sustainability story.

The company's program began about five years ago with goal setting, creating the means to take basic measurements and embarking on a monitoring process. Then it started collecting data and circulating progress reports internally.

It's not that there wasn't a story to tell, but in an industry where sustainability is often showcased by an item or a product line, The North Face's strategy doesn't lend itself to an easily told product tale.

In addition to focusing on the business aspect with the greatest environmental footprint, The North Face holds the view that "the further upstream we go, the more impact we have on [easing] the environmental impacts," Mott said. So by that reasoning, the greatest benefits result by improving the sourcing and manufacturing of core materials that are common to the greatest amount of the company's products.

The argument for leveraging impact and scale across the company's spectrum of products grows stronger when you consider the number of materials that can go into any one item. Mott pointed to the firm's Atlas Triclimate jacket as an example. "It has 44 accessories and trims and 12 different fabrics," he said. By focusing on such a complex item, which is typical of the company's expedition-quality gear, "you could end up chasing down a lot of rabbit holes."

"There is a lot of market pressure for companies to talk about how green their products are and we've really stayed true to our approach," said Mott, who noted that commitment with pride.

"And that may not specifically yield a particular product story because we're going after fabrics used in dozens of styles," he added.

The merit of The North Face's strategy became evident as results from tracking environmental data showed reductions in use of water, energy and chemicals -- which in turn enabled the company to frame an outward-facing sustainability story.

"We realized it was time to get that [information] out there ... and we also realized that the more transparent you are, the more your partnerships work better and the more everyone realizes how committed and how serious you are," Mott said.

Here is a look at how applying the bluesign standard has eased the environmental impacts of The North Face's supply chain: 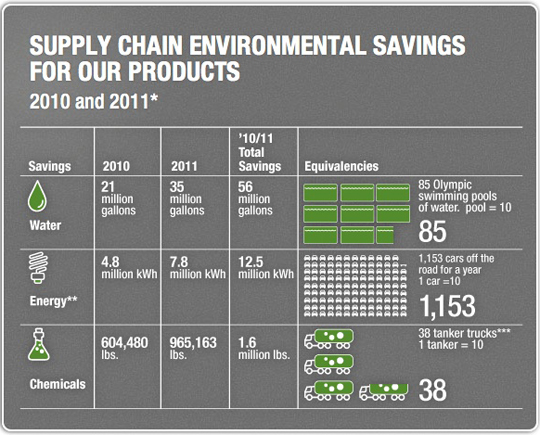 And here is an excerpt of key performance indicators from the firm's CSR report: 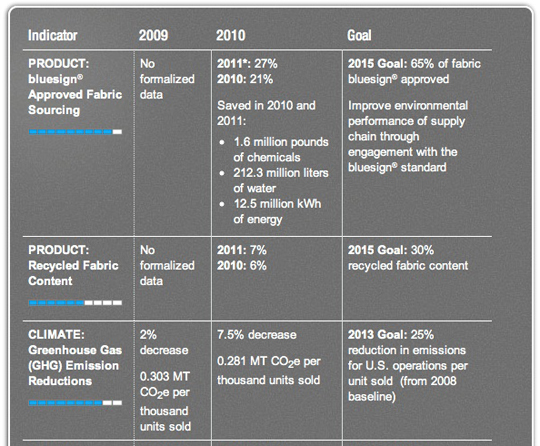 By going public with its efforts and the results thus far, The North Face joins a number of major brands -- Patagonia, Timberland and Nike to name a few -- that have been visible in the green arena for some time and have been prominent in industry-based sustainability efforts that have also included The North Face.

The North Face is getting help from alpine climber and long-time supporter Conrad Anker to tells its sustainability story. Anker will be on hand tomorrow in San Francisco where The North Face will present its CSR report.

Looking ahead, Mott said, The North Face wants to increase efforts to:

Photo and charts courtesy of The North Face.

What's Your Biggest Accomplishment in 2011?