Building a low-carbon economy requires bold ideas and long-term thinking on a scale that matters.

The Atlantic Wind Connection, you may recall, is a company that has embarked on a multi-billion dollar, decade-long project to build an undersea transmission cable stretching about 350 miles from northern New Jersey to southern Virginia. (See my 2010 blog post, Google's Atlantic coast wind deal.)

It will bring down the cost of offshore wind projects, create a more reliable electricity grid along the east coast and create thousands of jobs. The Atlantic Ocean is well-suited for offshore winds because its relatively shallow waters extend for miles out to sea, so turbines can take advantage of stronger winds and they are barely visible from land. 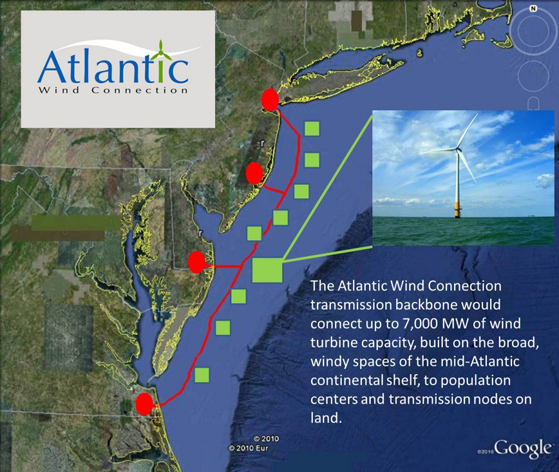 "It's a scalable platform that literally creates a superhighway for offshore wind," said Michael Terrell, who leads energy policy at Google, a major investor in Atlantic Wind.

But like most big, bold ideas, this one is risky, and so to assure the public that the project is alive and well, its executives and financial backers held a briefing this week at the National Press Club.

Mostly they talked about the economic impact of offshore wind. "Here is an opportunity to create an entirely new industry," declared Bob Mitchell, the CEO of the Atlantic Wind Connection and a transmission-industry veteran. Chet Culver, the former governor of Iowa who is now an energy and infrastructure consultant, described how Iowa has become a manufacturing and distribution hub for the midwest wind-power industry, generating thousands of jobs.

Mid-Atlantic states, he said, now have the same opportunity, if they embrace offshore wind. "We went from five percent to 20 percent renewable energy in Iowa in just five years," he said. Keith Frederick, a political pollsters, said that nearly four out of five people in the region support wind power, and would be willing to pay $2 a month extra on their utility bills to pay for it.

And, for now, the state of the mid-Atlantic offshore wind industry is, well, uncertain at best. The most advanced project between Virginia and New Jersey is a 450 megawatt farm begin developed by NRG Bluewater Wind off the coast of Delaware, which has been in development since 2006.

According to NRG, the project needs to clear dozens of regulatory approvals from the state and federal governments, under such laws as the Clean Water Act, the Rivers and Harbors Acts of 1890 and 1899, the Archaeological and Historic Preservation Act of 1974 and the Abandoned Shipwreck Act. Who knew the wind business was so good for lawyers?

To put that 450 MW farm into context, the Atlantic wind people would like their transmission to be capable of integrating 7,000 MW of offshore wind generation into the mid-Atlantic power market. The more turbines that are connected, the more the project makes economic sense, obviously, because its costs can be spread over a broader base of consumers.

Although Delaware, Maryland and New Jersey all have renewable portfolio standards that require their utilities to bring on more wind and solar power, offshore wind projects are tough to sell to state regulators and electricity consumers. While the Atlantic Wind Connection is expressly intended to bring down those costs, it's hard to know by how much.

With all those obstacles arrayed against the Atlantic Wind Connection, why pay attention at all?

Essentially, because of the backers. Google isn't known for being dumb. Rick Needham, green business operations director at Google, says the company invested because the project "offers a solid financial return while helping to accelerate offshore wind development."

Google has invested roughly $850 million in a variety of clean energy projects in recent years. Says Needham: "We're willing to take calculated risks on early stage ideas and projects that can have dramatic impacts while offering attractive returns."

The other investors are heavyweights, too. Originally, they included Good Energies, a global investment firm that focuses on renewable energy and energy efficiency, and Marubeni, a publicly traded Japanese conglomerate. Last summer they were joined by Elia, a transmission company based in Belgium whose CEO, Daniel Dobbeni, said at yesterday's briefing that Elia has built transmission lines for offshore wind farms in the Baltic Sea.

Patience will be required from all. Bob Mitchell told me that if all goes well, construction of the transmission line could begin in 2014.