Built in 1954, the terminal that was once the hub of the airport is now home to domestic flights by Virgin America, the only airline based at SFO, and American Airlines. Virgin's Richard Branson joined San Francisco Mayor Ed Lee and California Lieutenant Governor Gavin Newsom in April to open the 640,000 square-foot terminal following a two-year, $383-million renovation and green makeover.

Posters that declare the terminal is "So green, it's gold" now decorate the airport. 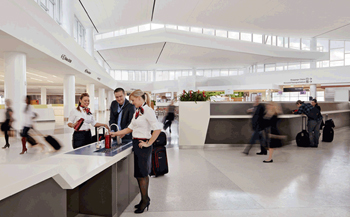 "Since its unveiling a few short months ago, travelers have overwhelmingly applauded T2's incomparable earth-friendly comfort and innovation, and our airline partners have appreciated the significant upgrades as well," said Airport Director John L. Martin in a statement. "SFO has clearly raised the bar for airports."

LEED stands for Leadership in Energy and Environmental Design, and San Francisco requires that its new public buildings and major renovations projects achieve at least LEED-Silver certification, the second of four levels in the USGBC green building rating system. (The first level is basic certification; the highest level is platinum.)

The project team that included Gensler as the master architect and Turner Construction initially targeted a LEED-Silver rating, but set its sights on the higher certification level as work progressed. 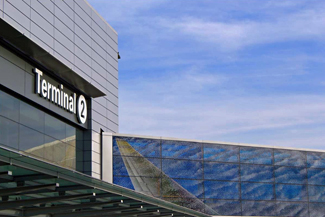 During a site tour while construction was underway, members of project team told me they sought to include as many green design elements as possible to conserve energy, water and materials and enhance air quality, while also making the facility cost efficient to operate.

The designers and builders also wanted to provide travelers with a highly functional, yet pleasant and relaxing place where they could prepare for, or recover from, the bustle of their flights -- a place that recalled the days when mass commercial air travel was still new and hadn't acquired the allure of a crowded, cross-town bustrip.

Their goal was to "bring back the joy of flying," Melissa Mizell, a senior associate at Gensler, said at the time.

The result is a building with soaring ceilings and abundant natural light. The facility is designed to exceed energy reductions required by California building code by 15 percent and includes fixtures that use 40 percent less water than a comparable structure. 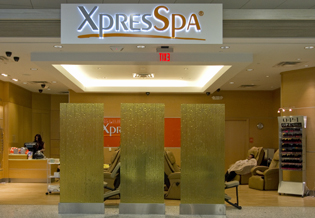 The terminal also combines the amenities of the hospitality industry with the diversions of an upscale mall and the must-haves of modern commercial travel -- such as 400 outlets to plug in laptops, pads and other personal electronics, workstations, lounge areas that facilitate networking and hydration stations for filling reusable water bottles.

[Here are earlier GreenBiz articles about the terminal's design and history and it's reopening last spring, along with more photos.]

The renovation of the terminal is part of a larger effort by airports and the commercial air travel and cargo industries to reduce the environmental footprint of their impact-intensive operations.

Other recent projects include:

Green Building Takes Off at Airports