In one of her opening speeches at the UNFCCC's climate change negotiations in Durban, Edna Molewa, the Minister of Environmental Affairs who is leading South Africa's negotiation team, first raised the big issue of water.

She voiced concerns that the critical water situation of water in Kenya would also likely be the future of other African nations, should progress on climate change and water not be achieved by the end of the Conference.

If Africa's water challenges are not addressed, the ripple effect will stretch first across Africa, then far beyond the African continent, with significant and unsettling ramifications for the global economy. That is why water should be central to any climate change adaptation talks in Durban. 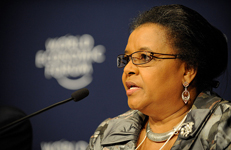 2011 saw the Horn of Africa experience the worst drought in 60 years. A food crisis, high levels of malnutrition and pre-famine conditions swept across vast swathes of the region, further heightening the significance of water in countries including Kenya.

The destruction of many trees in the Mau Forest, for example, caused severe soil erosion, thereby polluting one of the country's main watersheds. Water is scarce and sanitation is a major concern.

In addition to the dangerous societal impacts of a water crisis, Kenya's agriculture and livestock-heavy economy has been severely shaken.

Minister Molewa made it quite clear that Africa is the continent most vulnerable to the effects of climate change, due to its dependence on rain-fed agriculture. She reported that even African nations with water surpluses will shift to a position of water scarcity before 2025. This is supported by the Intergovernmental Panel on Climate Change's prediction that yields from rain-fed agriculture in Africa will shrink by half by 2020.

Other continents have experienced the force of water this past year. Floods in Thailand and Cambodia caused upset and disruption to communities and thousands of local businesses, wiping more than 1.5 percent off Thailand's GDP. The Japanese automotive industry was also a flood victim and lost $450 million of profit as a result of the business interruption to its Thailand-based suppliers.

Water -- whether too much, too little or too dirty -- should be a consideration for companies and policy makers globally. The latest insight from the Carbon Disclosure Project (CDP) on water as a global business concern shows that nearly two thirds (59 percent) of the 190 global businesses analyzed for the study report exposure to water-related risk. In keeping timescales referenced last Monday by Ms. Molewa, the majority of these risks are expected to impact by 2016.

The 2011 CDP Water Disclosure report also revealed that 57 percent of the organizations that participated in the survey report board-level oversight of water policies, strategies or plans.

By comparison, a report released in September 2011 showed that 94 percent of Global 500 companies report board-level oversight of climate change, suggesting that corporate understanding of water as a business concern trails that of climate change.

While there are a clearly a number of leading companies who understand the business implications of water, it is apparent that water should be far higher up on the corporate agenda. Too many companies still view water as a cheap resource and fail to consider its implications beyond their own operations. Many companies are not prepared for managing water risks in their supply chain.

It is important to note that water offers significant business opportunity, and companies that do not seize that opportunity lose competitive advantage. 63 percent of the companies contained in the CDP report say that water presents commercial opportunities, most of which (79 percent) are near term.

During her speech, Minister Molewa acknowledged the benefits proffered by water. She said that even despite regional drought, Africa uses just 10 percent of its hydropower potential and that unlocking its water resources could provide enough renewable energy to rescue the continent from the effects of climate change.

As we enter the second week of the negotiations and key Ministers start arriving this week, I would like to see water, as one of the greatest adaptation issues, progress up the COP17 agenda.

As Anne Kvam, Global Head of Ownership Strategies, Norges Bank Investment Management (NBIM), recently discussed at a CDP Water Disclosure event, there is no one-size-fits all policy that will provide the solutions and guidance required for water. Water is a local issue, so it is not often that solutions and learnings can be transferred from one location to another but the consequence of not addressing water locally will be felt globally.

Water is complex and hugely challenging from a policy viewpoint, but the Conference should incorporate water as one of the main discussion points. Greater emphasis must be placed on the relationship between climate change, water and human health because water is so heavily linked to climate change adaptation and because a lack of action will have unthinkable consequences.

Those continents, countries and corporations that are able to navigate the challenges of water effectively, however, will be able to profit from the significant opportunities that result from a greater understanding of water as a foundation which supports almost all economic and social transactions.

How innovative financing can build climate resilience in Africa

Here's why African cities could lead in water innovation