Unilever Climbs to No. 1 in Climate Counts Ratings

Unilever Climbs to No. 1 in Climate Counts Ratings

Unilever knocked Nike from its three-year reign as the top-scoring firm in the annual Climate Counts assessment of major consumer brands and their work toward corporate climate responsibility.

Unilever's climb to the lead position is among the highlights of the Climate Counts Scorecard issued this morning. The report shows a steady increase in CCR scores attained by companies as well as a growing number of firms being included in the review.

"We're witnessing a remarkable shift across the corporate community," said Climate Counts Project Director Mike Bellamente in a statement released with the report. 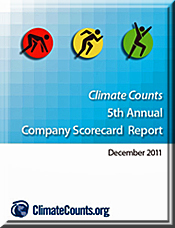 "As business risks associated with climate change continue to grow, sustainability is becoming intertwined with long-term strategy at the highest levels of business," he said. "Our optimism is tempered by the reality that global greenhouse gas emissions continue to rise, but corporate leaders appear to be on the right track."

The four highest-scoring firms for 2011 are:

Unilever has committed to slashing its environmental footprint in half by 2020 by following its Sustainable Living Plan. The company's rise to the top of the 2011 Climate Counts Scorecard marks the second time in as many weeks that the firm has been recognized for its sustainability efforts.

How the Scorecard Works

Climate Counts reviewed 136 large companies in 16 business sectors this year. Each firm was scored on a 100-point scale based on criteria in four key areas that deal with whether the company:

Climate Counts groups companies into color-coded tiers based on scores, as the charts below show.

The brands in the highest tier are "striding" toward climate goals and are labeled in the green. The deeper the shade, the higher the score.

Firms that are just starting to address their climate impacts are marked in yellow. Companies without a climate strategy are considered "stuck"  and tagged in red.

Here's a look at this year's high-scoring brands by industry sector: 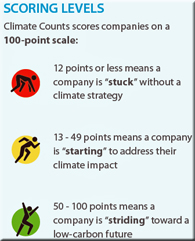 Scores have increased by 54 percent since Climate Counts conducted its first review in 2007. The inaugural scorecard covered just 60 big-name brands.

Mike Bellamente works hard to make sure that Climate Counts