The cumulative total of LEED-certified square footage for existing buildings now exceeds that of new construction for the first time in the history of the U.S. Green Building Council.

"The U.S. is home to more than 60 billion square feet of existing commercial buildings, and we know that most of those buildings are energy guzzlers and water sieves," said USGBC President, CEO & Founding Chair Rick Fedrizzi in a statement announcing the development yesterday.

"Making these existing buildings energy and water efficient has an enormous positive impact on the building's cost of operations. And the indoor air quality improvements that go with less toxic cleaning solutions and better filtration create healthier places to live, work and learn."

Buildings account for about 40 percent of energy consumption and greenhouse gas emissions in the United States, so improving their resource efficiency and performance goes a long way toward reducing the overall GHG emissions produced in the country. And since new construction makes up only a fraction of the structures in the built environment, existing buildings present the best opportunity for positive change. 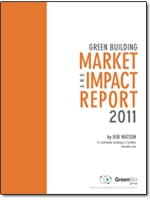 Green building expert Rob Watson, a senior contributor to GreenBiz.com and the founding chairman of the LEED Steering Committee, predicted that the uptake for the Leadership in Energy and Environmental Design standard for existing buildings would outstrip that for new construction. Watson's annual Green Building Market and Impact Report for GreenBiz Group has charted the progress and influence of LEED for the past four years.

"We've been watching this trend develop for LEED-certified existing buildings to catch up and surpass the New Construction standard," Watson said. "This is a welcome and overdue development. Greening existing buildings will be the future of the industry in the U.S."

The USGBC was formed in 1993, and the pilot launch of the Leadership in Energy and Environmental Design rating and assessment system followed in 1998. The growth spike for certifications under the LEED standard for existing buildings, now formally called LEED for Existing Buildings: Operations and Maintenance or LEED-EBOM, began in 2008 as the economic downturn cut into new construction.

The USGBC and other green building proponents are quick to stress that EBOM certification is an option for all existing buildings, not just those that are famous, enormous or both. Seeking certification under the standard is a pathway to improving building performance, advocates of sustainable buildings say, and demonstrated reporting of building energy performance -- and work to improve it -- has become a requirement in New York, San Francisco and other cities.

Photo by Z.H.CHEN / Shutterstock.com of the tip of the Transamerica Pyramid.