I recently visited New Orleans for the first time, with the question no doubt asked by most of the Crescent City's visitors: More than six years post-Katrina, is New Orleans back?

The answer is complex, and the story is one of resilience, devastation, rebuilding and sustainability.

The French Quarter is booming, and Bourbon Street is a 24-7 party. Jazz flows on Frenchmen Street in the Faubourg Marigny district. Tourists pack Jackson Square and restaurants and attractions are crowded. In the districts that cater to visitors, you'll likely be told -- as I was -- that New Orleans is "85 to 90 percent back." I predict that you'll have ample reason to agree if you visit New Orleans' most storied spots. (And you should visit, as I'll explain below.)

Enter the east side of town, though, and large swaths of post-Katrina residential and commercial abandonment remain apparent, with blighted areas easily visible from Interstate 10. Eastern New Orleans is estimated at up to 40 percent vacant, and unused properties include not only housing, but diverse commercial sites, including the former Methodist Hospital and Lakeland Medical Center complexes, and the former Six Flags amusement park. 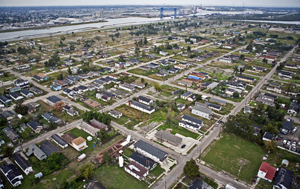 Some good news came on December 21, when Walmart announced its purchase of the Lakeland Medical Center site for a 180,000-square-foot supercenter. The new Walmart will add much-needed retail space to this portion of New Orleans. The city government purchased Methodist Hospital in 2010, and a re-opening is planned for 2013. The redevelopment of the Six Flags site remains uncertain -- two proposals that survived a recent municipal RFP process are an outlet mall and a theme park. But even with these signs of progress, the destruction wreaked by Katrina remains all too evident.

The Lower Ninth Ward is of course the epicenter of Katrina's devastation, inundated in 2005 by stormwaters from the Industrial Canal. The Greater New Orleans Community Development Center, in an analysis of 2000-2010 census data, estimates that the district -- rendered uninhabitable in Katrina's wake -- has recovered only 22 percent of its population (PDF).

Visit the Lower Ninth Ward today, and the effects of Katrina's ravages remain. Most structures remain vacant or boarded up, and some retain the markings left by emergency responders in the first post-hurricane searches for the injured and the dead. 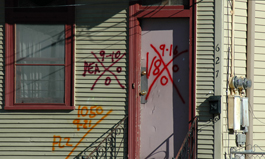 Yet, the Lower Ninth Ward is a hopeful place in that it is the epicenter of advanced sustainable rebuilding efforts. The Make It Right Foundation, founded by actor Brad Pitt, is halfway through the process of constructing 150 LEED Platinum, affordable homes.

Make It Right homes are raised at least two feet above the base flood elevation level (an exception is the Morphosis FLOAT House, which rises on guideposts to float the structure as water levels rise). Structures are designed to be storm resistant and reduce energy and water use as a result of several factors. They include use of closed cell spray foam insulation; daylighting; efficient lighting, plumbing fixtures and appliances; solar panels and tankless water heaters. Homes also incorporate low-VOC and recycled materials as well as sustainable landscaping designed to reduce flooding.

Equally impressive is that Make It Right achieves sustainability on a budget. The average cost of a Make It Right home is approximately $150,000, and costs have been reduced to about $130 per square foot through rigorous value engineering and the careful training of contractors.

Can you help bring New Orleans back faster? Assuredly yes. First, you can support Make It Right's green rebuilding efforts or another Katrina relief activity of your choice.

Second, you can visit this remarkable and resilient city. Tourism is New Orleans' largest industry, accounting for 40 percent of local tax revenues and nearly 70,000 jobs. New Orleans' culture, history, music and cuisine are unique, and your visit will help to ensure a vibrant and expanding economic base. These are great reasons to indulge yourself and, as they say in NOLA: Laissez les bons temps rouler (let the good times roll).

Need more reasons to visit? Eco-tourism venues will be the subject of my next blog.

The Greener Side of New Orleans