Toxic Chemical Pollution Up 16% in 2010, Driven by Mining Firms

Toxic Chemical Pollution Up 16% in 2010, Driven by Mining Firms

The U.S. Environmental Protection Agency announced the total increase Thursday, following years of decline. Toxic emissions to air, soil and water totaled 3.93 billion pounds in 2010, compared to 3.39 billion pounds in 2009. This includes annual increases in a number of toxic chemicals and metals, including lead, dioxins and carcinogens.

"The increase from 2009 to 2010 in disposal or other releases could be due to a change in the composition of raw materials used at facilities, for example, a change in the chemical composition of ore bodies at metal mines," The EPA said in its 2010 Toxic Release inventory (TRI) Analysis. "Other possible reasons for an increase include changes in management methods, changes in release estimation methods, changes in production, increases in chemical use, or an economic change."

The metal mining sector accounted for 41 percent of all disposal or other releases in 2010. The 1.6 million pounds of toxic releases in the sector last year grew 43 percent over 2010.

In a statement released yesterday, the National Mining Association attributed the sector's large share of toxic releases to the make-up of the ore being excavated, as well as increased demand for U.S. metals in step with the economic recovery.

"Nearly all -- 85 to 99 percent (by volume) -- of the substances reported by mining operations occur naturally in the local rock and soil and remain in low concentrations in the large amount of material handled and managed at specially designed on-site facilities permitted and regulated by state and federal laws," the NMA said.

"Because these naturally occurring trace amounts are covered by TRI, mining operations make up a large portion of the releases to land for on-site management that were reported by all operations in 2010."

While the annual results are largely moving in the wrong direction, the long-term trends are more promising. Total releases and disposals in 2010 are 30 percent lower than in 2001; during the same 10-year period, releases of mercury, dioxins, PBTs and carcinogens.

One positive trend to emerge in the 2010 TRI Analysis is an increase in the amount of production-related waste being managed and recycled or treated.

The table below shows the Top 10 TRI parent companies by the amount of production-related waste they managed. Honeywell, Incobrasa Industries, Renco Group, Syngenta and Ashland recycled the bulk of it, while Koch and Dow Chemical chose treatment for the majority. 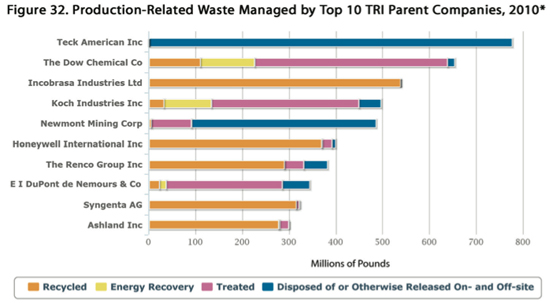 Yet when it comes to preventing the amount of toxic waste generated in the first place, TRI facilities' actions are less rosy. Less than 11 percent of all TRI facilities reported pollution prevention (P2) activities. The chart below details the P2 activities taking place at the top 10 TRI parent companies mentioned earlier.

A couple of examples include a Dow Chemical facility that introduced a process to reuse recovered toluene, instead of generating it as a waste, and how Honeywell shifted toward no-lead solders, thereby reducing lead use and waste.

Tables courtesy of EPA; Mine image via Shutterstock.

Economy, Better Management Cited for Fewer Toxic Emissions in US