Breaking Down the Barriers to Smarter, Connected Buildings

Breaking Down the Barriers to Smarter, Connected Buildings

Buildings account for 40 percent of all energy consumed in the United States and according to the AIA, approximately 50 percent of greenhouse gas emissions. Building Automation Systems are proven to reduce energy consumption on average 40 percent.

Unfortunately, most buildings still do not benefit from the energy savings of BAS nor do they contain the cabling necessary for wiring the essential sensors and controls.

Adoption of building automation has been hindered by many factors, primarily the following:

These classic barriers have been overcome by an ecosystem of wireless controls that power themselves using energy infinitely available in office building spaces – indoor light, motion and temperature differences. It is now possible, with low investment and minimal disruption, to outfit buildings with self-powered, “peel & stick” sensors and switches that seamlessly connect into TCP/IP communications. The newfound simplicity and low cost are important catalysts to make buildings more energy efficient.

“This trend to centralize and converge building energy management is key, given the fact that only five percent of small and medium sized buildings (100,000 square feet or less) are equipped with a building management system,” said Kirsten West, principal analyst at West Technology Research.  “Small and medium-sized facilities account for 98 percent of all buildings and 65 percent of floor space, making this segment the largest underserved market in the industry by far. That is why the ability to populate a facility with sensors that can communicate over TCP/IP to a centralized building automation system is key to this Greenfield market segment.”

Before energy harvesting sensors and switches were invented, integrators were limited to line-powered or battery-powered devices. Wires pose difficultly in reaching all corners of buildings and batteries introduce intolerable maintenance issues into the mix.

In the early 2000s, EnOcean introduced an energy-harvesting wireless standard that transcended the limits of wires and batteries. The wireless standard and technology stemmed from a simple observation – in the same spaces where building sensor information resides, sufficient energy exists to power sensors and radio communications.

Since its inception, applications for self-powering wireless sensors and controls for use in building automation have steadily increased.  Lighting and HVAC energy management systems provide a rich habitat for the development of sensor-driven solutions that regulate energy flow in buildings.Now there more 850 EnOcean-based devices are available and the controls have collectively been installed into 200,000 buildings worldwide. The EnOcean wireless and energy harvesting standard has been on the market for more than 10 years. Now that the technology has matured, an alliance of more than 250 participating companies was formed to push the technology and ensure interoperability between all EnOcean-enabled devices. Several key several member companies of the EnOcean Alliance are focused specifically to the development of solutions that bridge existing EnOcean-based sensors and/or switches to TCP/IP networks. Can2Go, Magnum Energy Solutions and BSC-Software are leading the charge in North America to develop controllers/gateways and software that connect sensor data with systems that can make smart decisions about lighting and HVAC energy management in buildings.

Although wired devices might be less expensive to purchase, the installation of wired solutions, particularly in retrofit scenarios, entail considerably more labor and materials than wireless solutions. In a conventional wired installation, the process involves pulling miles of wire for sensors, switches and controllers. Obstacles, such as asbestos and impassable materials are frequently encountered when fishing wires through walls and ceilings. Additionally, wired retrofit installations can result in disruption of business operations and building closures. Wired installations often require patching and repainting, which increase the amount of time and labor costs required for the install. 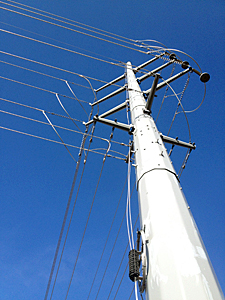 When factoring to the amount of labor and complexity required for the installation of building automation controls, wireless technology has the clear advantage when compared to traditional wired options. Wireless components, such as light switches and occupancy sensors, can be easily mounted on surfaces inaccessible to wired solutions such glass, concrete or brick. With wired solutions, installers can never be sure what surprises they will find behind a building’s walls. With wireless solutions, since no walls need to be disturbed, uncertainty and complexity are significantly reduced.

Small and medium sized facilities are seldom equipped with building automation systems because of high upfront costs and long payback periods. The reality is that upfront, fixed costs, including software and dedicated servers, are proportionally more burdensome for smaller installations given their more limited facility budgets. Economic and environmental paybacks are overshadowed by upfront costs.

In the last two years, the development of EnOcean-to-IP gateways and accompanying building management software has made payback incentives more attractive. The EnOcean-enabled gateways and software offer expensive and complex server/software packages. Solutions that traditionally cost thousands for dollars have been replaced by solutions that cost in the hundreds of dollars.

Merging the Worlds of Lighting and HVAC

Facility lighting and HVAC operations have been handled separately by professionals specializing in two distinct domains. Now, innovative solutions have bridged the historically polarized worlds together. One controller can offer simultaneous wired and wireless control for both lighting and HVAC applications. For example, a self-powered wireless occupancy sensor can provide data that controls both climate and lighting.

The long-standing assumption in the industry was that lighting and HVAC both required their own unique specific hardware, software and integration labor. Because traditional wired controllers have a limited number of physical inputs and outputs (I/O) and because wiring to and from them is affected by building constraints; the industry has kept the focus on application-specific products -- leaving HVAC and lighting apart.

TCP/IP is expected to be the communications protocol of choice when relaying demand response signals between utilities and buildings, according to the U.S. Department of Energy -- making solutions that already interoperate with the smart grid and smart meters via TCP/IP well positioned for the future.

Top photo of buildings via Shutterstock.com. Diagram and inset photo courtesy of EnOcean.