In an industry first, General Motors' Chevy brand has created a green label for its cars and will roll out the sticker bearing environmental data next month starting with the 2012 Chevy Sonic.

The Ecologic label (pictured below) will be affixed to the driver's side rear window of Sonic sedans and hatchbacks in the U.S. market by the end of February, GM and Chevy announced today. The automaker also said it will place Ecologic stickers on all cars under the Chevrolet nameplate for the 2013 model year.

"We've taken an environment leadership role (with the Chevy Volt electric car) and we thought this was the next evolutionary step," said Chevy Brand Marketing Manager Bill Devine.

"From a sustainability point of view what this signals, I think, is that we're trying to provide consumers with relevant information that we know they're very interested in," said Mike Robinson, General Motor's vice president of sustainability and regulatory affairs. 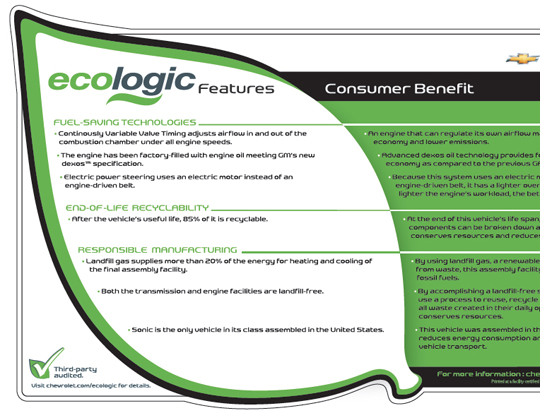 Devine and Robinson talked to me this morning about the auto company's latest green initiative, which it undertook with the Two Tomorrows group as the validator of environmental claims.

The Ecologic sticker is the first voluntary and third-party certified label of its kind for autos, although environmental product labeling is becoming more prevalent in the U.S. for building materials.

Federal regulators, which require car companies to disclose fuel consumption data and other vehicle information on new cars sold in the United States, revamped their labeling last year to make it even more explicit. And in California and New York, new cars also must display a global warming scorecard.

Supplementing the mandated information, the sticker devised by Chevy tells prospective buyers about the environmental measures taken at manufacturing and assembly facilites, fuel-saving technology in the car, and the percentage by weight of material in the car that can be recycled.

The idea is to convey what Chevy has done to ease the environmental impacts of its cars during its lifecycle -- or "before the road, on the road and after the road," as Devine put it.

Although the sticker is about 7 by 14 inches, there's not enough room to display other key environmental information about the cars, Devine said, so Chevy is launching a microsite that will provide further details: www.chevrolet.com/ecologic.

The site is expected to have expanded green data on the Sonics by the end of February and for now lays out why Chevy developed the label.

GM uses recycled content in car parts and interiors, but that info, as yet, isn't included. Robinson said the Ecologic label will develop further as the firm collects and verifies more environmental data and refines how to communicate the information. "We view this as we view the larger sustainability efforts in the company, this is a journey, it never ends and it will evolve over time," he said. "This is not a static, once-and-done type of thing."

The company focused on Sonic for the green sticker in part because it is still a new addition in the Chevy line, and because it is the only car of its class made in the U.S. -- a factor that resonates among car shoppers who want to buy American and makes it easier for the company to track the attributes included on the Ecologic label.

The initiative is part of a broader effort by GM to reduce the environmental impacts of its operations and products, curb energy consumption and carbon emissions, and save money.

GM's green commitments include a goal to achieve zero-waste-to-landfill status at its facilities worldwide and a pledge to invest some $40 million projects that will reduce the company's carbon emissions by 8 million metric tons.

The company also is increasing its public profile in emergency environmental efforts. GM made news when it promised to recycle the booms used to clean up the BP oil spill for making parts for the Volt. Then GM captured headlines again when the project turned out to be more successful than expected, diverting more than 212,000 pounds of waste from landfill.

The announcement of the Ecologic label came on the eve the Washington Auto Show and follows two earlier green developments by the company this month -- the release of its latest sustainability report and plans for a special California edition of the Volt that will qualify for a $1,500 state rebate and a carpool lane sticker.

Asked if there are further projects in the offing, Robinson said: "You can expect a pretty consistent drumbeat of things coming from GM on the sustainability front."