Building on its work in the company-sponsored Phoenix Open, Waste Management is bringing its recycling program for special events to the Farmers Insurance Open this week and returns to the southwest for a third year to the golf tournament that carries its name.

The back-to-back PGA programs illustrate the growing interest among hosts of sporting events and pro teams to reduce their environmental footprint by increasing recycling, saving energy, purchasing eco-friendly supplies and turning to alternative fuels and renewable power sources. The efforts save the venues and their operators money and enable them to position themselves and sports figures as role models for sustainability.

For Waste Management, the greening of pro sports provides a growing avenue of business. It also provides further evidence of the strength of the company's decision to dump its business model as a garbage hauler and transform itself into a materials management service company that emphasizes waste reduction and recycling.

For example, the 2012 Waste Management Phoenix Open has been designated as a zero waste event by the tournament host association, the Thunderbirds, and the company. 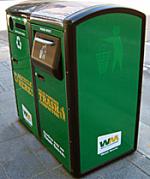 "This is a huge new effort," said Michele Grossman, Waste Management's senior consultant for sustainability services. At the tournament, which begins Monday, there will be only recycling and composting bins, along with 60 solar-powered compactors for food waste.

Organizers decided to take on the zero waste challenge based on the success of an expanded sustainability effort in 2011, in which recycling, composting and solar-powered compacting bins (a solar-powered trash compactor and a recycling bin from last year are pictured right) were brought out in big numbers along with an army of volunteers, who helped spectators understand where to place food containers, beverage bottles and other things that usually would be thrown away.

As a result, more than 318 cubic yards of material were diverted from landfill, enough cardboard was recycled to save an estimated 495 trees and more than 140,000 used golf balls were collected and given to a local charity for reuse.

Spectators embraced the campaign, Grossman said. Evidently concessionaires and caterers did, too, because in order to have a zero waste event this year, anything that previously was tossed into rubbish cans must now be suitable for recycling or composting.

At Torrey Pines in San Diego, where the Farmers Insurance Open concludes this weekend, three-bin systems for recycling, composting and trash are in place throughout spectator areas and the back of the house, Grossman said. Food waste is being taken to a digester off site and will be used to help generate electricity.

The tournament leaderboard, which is powered by biodiesel, periodically features some of the green measures being taken this year. They include work by the San Diego Boy Scouts, who are sorting through the recycling to collect bottles and cans to earn money for their troops, and a plan to reuse the indoor-outdoor carpeting from VIP tents in charitable building projects, like those of a nearby Habitat for Humanity, Grossman said.

"There's literally tons of it," she said of the carpeting. Finding another use for it is key to Waste Management's new view of its business. "Recycling is great," Grossman said, "but decreasing waste is really what we're pushing for."

The efforts at the two PGA tournaments are among the first of what promises to be a year of sports events that feature stronger green messages.

The walkup to Super Bowl XLVI, included an online carbon and water-tracking contest by 1st and Green, a project of the Indianapolis host committee for the game. Recycling is a major theme this year. Collection sites have been set up for community use in the days before the game, and recycling programs for the event have been stepped up as well.

Leftover prepared but unserved food from the event will be donated to Second Helpings for people in shelters and other care centers. Throughout Super Bowl week, the JW Marriott in Indianapolis will collect food waste from its kitchens for a composting pilot project with the host committee, the city, and recycling and waste management companies.

Nike and the NCAA

Green sports efforts are growing at the college level as well.

Nike is outfitting NCAA basketball teams from nine school with a uniform made from recycled polyester that the company calls the Hyper Elite Platinum. On average, each uniform is made from polyester that is derived from 23 recycled plastic bottles.

Top image of golfer setting up a tee via Shutterstock.com. Photo of solar compactor courtesy of Waste Management. Photo of basketball uniform courtesy of Nike.

Seahawks, Patriots and a desert: Sustainability at Super Bowl XLIX

Why Super Bowl XLVI Will Be the Greenest Yet

As Masters wins are tallied, how about the environment?