The lighting at the National Mall became brighter, whiter and greener with the retrofit of 174 street lamps with energy efficient LED lights.

Osram Sylvania donated the LED bulbs and retrofit kits, valued at more than $100,000, and Pepco, the utility that supplies electricity to Washington, D.C., installed the lights for free.

The new lights are expected to cut energy consumption by as much as 65 percent, save roughly 77,500 kWh of energy and avoid slightly more than 94 tons of carbon emissions annually, according to a case study by the lighting company. 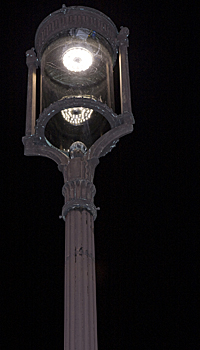 The LEDs replace a mix of high intensity discharge and compact fluorescent  lights, a combination that resulted in patchy illumination. Both the quality and color of light were uneven, and the variation in technology added to maintenance chores, according to the report.

The Park Service and the trust wanted to improve the safety of the mall with uniform lighting. But the agencies also wanted to preserve the existing cast iron light fixtures and the historic fluted bronze posts that support them. Using the retrofit kits, the lights were installed on the promenade from Third to 15th streets and the fixtures and posts remained intact, according to the Park Service and the trust.

The lights are expected to last longer than those they replaced in addition to using less energy. Osram Sylvania said the mall won't need new lights for about 25 years.

The case study noted that the company donated a lighting retrofit of the Jefferson Memorial in 2001, and the lights installed more than a decade ago are still in place, performing as they had when they were new.

Have LEDs Finally Hit the Mainstream?