Forging ahead with its green power agenda, IKEA is expanding its solar commitments in the U.S. yet again and installing more charging stations for electric cars.

IKEA now plans to bring rooftop solar power to 85 percent of its stores and distribution centers in the United States. Installation of arrays and EV charging sites continues apace with one each completed since the first of the year.

The company flipped the switch yesterday on the most recent project -- the installation of four Blink EV chargers at an IKEA store in East Palo Alto, Calif., a community in the San Francisco Bay Area.

The idea of bringing power generation and power as a service, in the form of EV charging, to retail locations is catching on. Walgreens, for example, is another company with robust solar and electric car charging programs. Kohl's sustainability efforts also include rooftop solar power systems and EV charging.

Not surprisingly, electric cars and charging services are being integrated into car rental and car sharing companies. Hertz upped the ante in that area this week with its announcement that it is testing Evatran's Plugless Power system to wirelessly charge electric cars at the rental company's corporate headquarters in New Jersey.

Here is a picture of a Plugless Power installation: 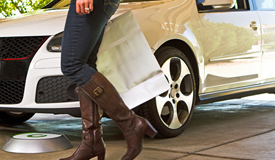 IKEA's latest expansion of its solar power initiative comes on the heels of an announcement in December to bring renewable energy to 75 percent of its U.S. sites.

The boost to 85 percent, announced last month, will bring solar power to five locations: stores in Bolingbrook and Schaumburg, Ill., Canton, Mich., Bloomington, Minn., and Pittsburgh, Pa. The installations are expected to be complete by this summer, pending local government approvals.

The company's car charging initiative, drawn up in partnership with ECOtality, will bring EV charging stations to nine sites in the western U.S. The East Palo Alto store that fired up its chargers this week was the eighth location on the list.

Hertz, which recently unveiled its "Living Journey" sustainability platform for worldwide operations, has claimed bragging rights as the first rent-a-car company to offer electric cars and plug-in hybrids on three continents and now says it's the first in the industry to test drive wireless charging.

The concept of inductive power transfer, which enables energy transfer via magnetic fields, is not new but the idea of applying it to EVs is relatively recent. It's been percolating lately with an Evatran trial at Google headquarters in Mountain View last spring and efforts to design a technology that enables cars to charge up as the travel down the highway. Stanford researchers and Halo IPT are among the developers in that arena.