Anywhere you look these days, sustainability considerations are playing an increasingly visible role in our lives and businesses. But what of their place in the national sports we devoutly cheer, debate and, yes, occasionally curse until we're at the brink of hoarseness?

Consider that even the most star-crossed teams host tens of thousands of spectators per event and hold consequential media reach and a unique place in local civic spirit, and it's not hard to recognize their potential influence in modeling sustainable behavior. Not to mention that these are organizations faced with managing sizeable footprints -- owing to their venues, attendance, merchandising operations, and travel needs -- and the expectations that can accompany public construction financing.

Being a serious sports fan, former Division 1 athlete, and sustainable business consultant, I've often wondered how my favorite teams are addressing their environmental impacts and opportunities. I certainly know of green events being held on important occasions like an all-star game or Earth Day, and of the many admirable community programs teams have carried out for years, but I decided it was time to take a closer look at the depth of these commitments.

So, with some support from my colleagues at Framework, I spent time during the fall of 2011 combing the official sites of every team in the National Football League (NFL), Major League Baseball (MLB), the National Basketball Association (NBA), and National Hockey League (NHL) to catalog all of the information teams are providing to the public through their websites on a 16-point list of sustainability issues such as energy strategy, water conservation, and procurement practices. (You can explore the full results in the interactive tables on our site.) 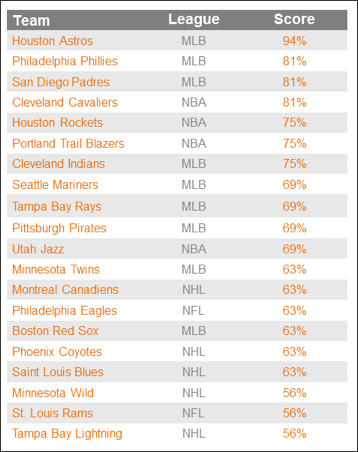 And each sport generally has its strong side and weak side when it comes to disclosure. The chart below breaks it down by league. 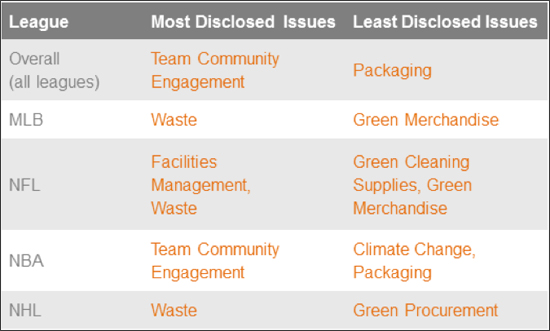 Our findings suggest there is a great deal more that teams can do to improve their performance and communication on environmental issues, especially when one considers that for nearly every category of performance we reviewed, at least a few teams had found ways of addressing the issue -- some quite ingeniously.

In particular, we encourage league leadership bodies to more systematically incentivize and facilitate environmental sustainability. There are numerous economic, brand and community benefits in these efforts, and we intend to report on some of the exemplary practices we've uncovered over the coming months.

We also intend to repeat this research on an annual basis to track the trends in this arena. We look forward to the day when we're able to report that every one of the leagues has achieved a winning record in managing for sustainability.

It's important to note that in this study, we've scored teams based on available information, not on verified performance. It's entirely possible that some teams are in fact involved in more efforts than they discuss on their sites, or that others are not living up the material published on their site. Data were current as of August, 2011.

Beyond the stadium: Q&A with sports professionals on the impact of sustainability in the industry