Nike hopes to win both green and gold at this summer's Olympics in London.

On Tuesday in New York City, the sporting-goods giant unveiled a new line of sportswear designed to help Olympians go faster, farther and longer. Nike is manufacturing its 2012 Olympic kits using less material -- and more recycled plastics -- than in the past.

The announcement came as part of a series of "cutting-edge, lightweight performance innovations designed for the track, the basketball court and beyond for this summer," CEO Mark Parker said.

To me, the most visibly different ecoinnovation is Nike's Flyknit shoe design.

Instead of the conventional assembly of fabrics, rubber, leather and other materials, the Flyknit comprises a single piece of a flexible mesh knit, a strong yet pliant fabric that fits like a sock over a wearer's foot.

Eliminating so much material cuts each shoe's weight by approximately 20 percent to about 160 grams. That may not sound like much, but multiplied by the 40,000 steps it takes to run a marathon, that totals about the weight of a car -- a ton or so -- that elite marathoners will no longer need to lift, said Martin Lotti, Nike's global creative director for the Olympics. 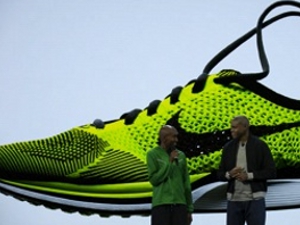 Nike is rolling out two versions of the Flyknit: a racing flat and a training shoe. Athletes from Great Britain, Kenya, Russia and the U.S. plan to wear the Flyknit at the games. At the event this week, 10-time gold-medal winner Carl Lewis spoke with 2012 Olympic team member Abdi Abdirahman (both pictured at right) about the Flyknit shoes.

A similar idea helped shape the company's new line of Olympic uniforms. Here, Nike has boosted its use of recycled polyester to produce lighter fabrics for a variety of shorts and tops – and even a wearable racing skin called Nike Pro TurboSpeed. It's basically a speed suit that's covered in dimples, which act like the surface of a golf ball, reducing drag by creating a thin layer of turbulence as an athlete cuts through the air.

By making the fabrics from discarded plastic bottles, the recycled polyester fabrics cut energy consumption by roughly a third compared with virgin materials.

The national basketball teams from Brazil, China and the U.S. will wear Nike Hyper Elite uniforms made from plastic reclaimed from 22 recycled bottles (pictured below). The shorts are ethereally light, weighing just about 5 ounces, a quarter of the weight of uniforms worn by today's NBA pros.

Lighter uniforms translate into less fatigue, more comfort and better performance, said Deron Williams of the New Jersey Nets, who endorses Nike and is expected to play for Team USA in the 2012 games.

Soccer players tend to be a bit smaller than basketball players, so just 13 bottles are necessary to make each of their kits. Still, it adds up: Nike's reuse of plastic bottles has diverted more than 82 million of the containers from landfills.

Speaking with me after the announcement, Lorrie Vogel, Nike's general manager of Considered Design, told me how competitive Nike's designers are. 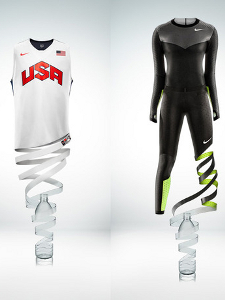 "It's a company full of ex-athletes, where we're constantly scored on our performance, and green-design benchmarking is no exception," she said.

I wondered if that competition makes Nike protective of its proprietary-materials innovations. The recipe for an ultra-lightweight shoe that may be worn on the Olympic podium this summer is worth protecting.

The company shares sustainability know-how strategically, Jones told me. New product or new material design recipes are typically strictly confidential, but design tools and shared materials knowledge is just the opposite, she said.

Jones, pictured at right, believes that among the many industries pushing the sustainability frontier, sports gear makers are among the most collaborative. For example, Nike and its competitors, Adidas and Puma, "recognize the benefit of sharing the recipe for green rubber with our suppliers," she explained. "We know that if our competitors start ordering it too, the price will fall, supplies will improve, and that will lead to the faster change on a larger scale." 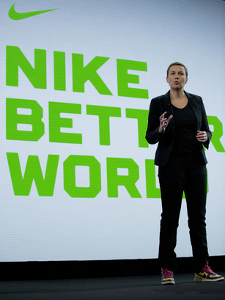 Consistent with that collaborative approach to competition, Jones reminded me that today's announcement follows a burst of intraindustry green-design initiatives that Nike has announced in the past 18 months. These include:

As part of her ongoing "How She Leads" series on women in sustainable businesses, Maya Albanese interviewed Hannah Jones for GreenBiz.com earlier this month. Check out their conversation here.

Why Nike and MIT see textiles as material to climate change

Nike moves faster to clean up its supply chain