Executives for the companies announced their green building achievements this week. For the Hearst Corporation, news of LEED-Platinum certification comes as the company marks its 125th year in business.

For design firm Perkins+Will, whose building also houses the Museum of Design of Atlanta and a branch of the public library, the certification recognizes not only the firm's green building efforts but also its work to promote community and sustainability in Atlanta for a third of a century.

LEED stands for Leadership in Energy and Environmental Design, and Hearst Tower was certified at the LEED-Gold level (the second highest of four designations) as a newly constructed building soon after its completion in 2006. Its new certification, based on LEED standards for the maintenance and operation of existing buildings, is an indication of how well the building is performing and whether it is meeting its design expectations.

Here some stats that support the platinum rating:

The Perkins+Will Building in Atlanta

Earning its certification with a score of 95 of a possible 100 baseline points, the Perkins+Will office in Atlanta now claims bragging rights as the top-scoring new construction LEED project in the Northern Hemisphere.

The firm, which has had an office on Atlanta's main thoroughfare for more than 33 years, bought the 1985 building at 1315 Peachtree Street in 2009 and renovated it so extensively that qualified for LEED consideration as new construction. 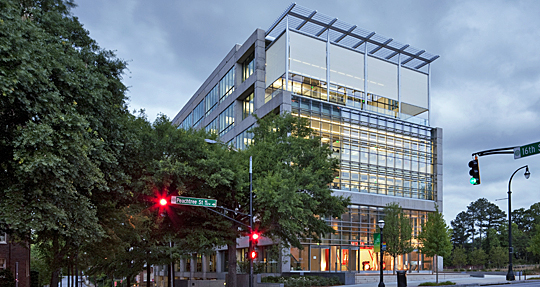 There's a picture of the building, above, and another, below, of a conference room.

USGBC President, CEO and Founding Chair Rick Fedrizzi  lauded the retrofitting and repurposing of the building so it accommodates the design firm and two organizations that serve the public. "Perkins+Will has designed a showpiece building," Fedrizzi said in a statement. "1315 Peachtree Street exemplifies the kind of environmentally sustainable measures that can be taken during a building retrofit."

Design elements and efficiencies built into the property cut energy consumption by 58 percent and slash use of municipally supplied potable water by 78 percent. The building features:

Office Depot, which has a robust green building program for stores built from scratch and others it moves into, is working to make its other facilities more environmentally responsible. That includes a 600,000-square-foot distribution center in Newville, Pa., which recently received LEED certification.

The site is second in size only to Office Depot's headquarters in Boca Raton, Fla. That 624,000-square-foot property earned LEED-Gold certification as an existing building in 2010.

Perkins+Will recently completed a renovation project at the Charles E. Young Research Library at the University of California, Los Angeles, and is hoping to score another strong LEED rating with that work.

The project involved the primary library for graduate students and faculty in humanities and social sciences -- a structure whose main component was built in 1964. There's a picture of the library to the right and more information about its renovation is available here. 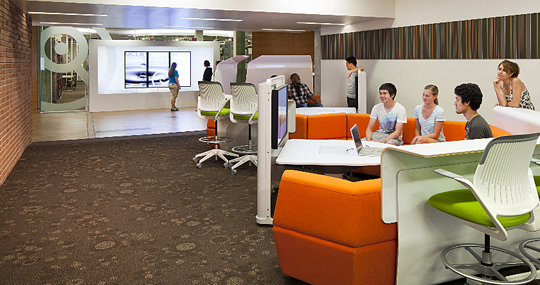 Other buildings that recently earned LEED recognition include: