Why sustainability consultants believe their industry is sustainable

Why sustainability consultants believe their industry is sustainable

Even as their field gets more competitive, sustainability consultants remain optimistic about their business prospects, according to a Green Research survey slated for release Tuesday.

About half of the 1,548 consultants that responded to the New York firm's survey say that business is currently strong, and 63 percent feel they will continue to see a strong business environment in the next six months.

"Demand for sustainability-related services is going to rise for the foreseeable future," said David Schatsky, author of the report based on the survey, Global Sustainability Consultant Survey, 2012. "A minority of businesses are actively engaged in remaking their strategies and remaking their business practices today, but there are thousands of companies below the Fortune 500 that have a lot of work to do, and that represents a very fertile ground for consultants to be offering their services."

With responses from 69 countries, the report represents the first global survey of sustainability and corporate social responsibility consultants, and shows how much the field has grown in recent years.

Forty percent of respondents entered the field less than three years ago, driven partly by the 2008 financial crisis and recession, which caused many consultants to become independent. Increased awareness of environmental issues then led many into sustainability consulting.

Aside from new entries, an additional 40 percent said they've been consulting on sustainability matters for five or more years, with half of them in the field for at least 10 years. 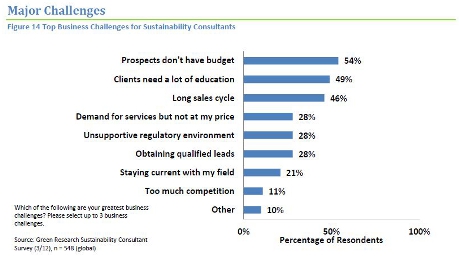 Schatsky said that consultants' optimism falls in line with economic conditions in countries. Those in the Asia-Pacific region and the U.S. appear most optimistic. Yet consultants also face a host of challenges.

"It's a very competitive space. There are a lot of consultants out there and it's not as if they are all making a ton of money," he said. "These services around sustainability are complex and they tend to be purchased by departments that don't have giant budgets."

Regardless, Schatsky said that long-term prospects for consultants look positive, as many consultants said they have been working on strategies, planning, benchmarking and metrics, all steps taken by companies in the early stages of sustainability work.

After that will come opportunities for consulting on more tactical matters, he said, like packaging, energy efficiency and carbon emissions.

"Companies always purchase consulting services for project reasons, for transient needs...they bring in experts as needed," Schatsky said. "So even though a lot of big companies have people responsible for sustainability or have a sustainability department, it's very common for them to be working with consultants for specific purposes, so I don't think this is going to go away."

For future CSOs, passion and social skills are the missing link

How to Set Green Goals by Learning from Industry Leaders

How to engage employees: Advice from four leaders