Google and DOD on leading the charge for better buildings

Google and DOD on leading the charge for better buildings

The drive to make buildings greener has been spearheaded by some unusual sources, including the Department of Defense, which is applying new technology to its 300,000 buildings worldwide, and Google, which is focused on transforming its offices to improve employee health and productivity.

On the first day of VERGE DC Wednesday, Rob Watson, CEO of EcoTech International and founder of the U.S. Green Building Council's LEED rating system, moderated a panel discussion about green-building strategy with Dorothy Robyn, deputy undersecretary of defense in charge of installations and environment at the DOD, and Anthony Ravitz, Google's real estate and workplace services green team lead.

"Four billion dollars a year is real money," Robyn explained, referring to the cost of energy for its buildings. "We have backup generators on our bases, but they are expensive and we worry about energy security and try to make them more secure." 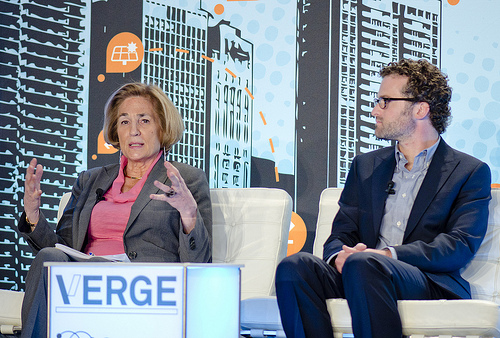 The DOD is investing $1 billion in energy-efficiency retrofits for its buildings. It has also tapped solar power both in urban areas and in remote installations, aside from other measures.

But, while the DOD has been a key driver of LEED since before the rating system was launched in 1998, Congress has since restricted it from pushing beyond LEED Silver certification for its buildings.

Robyn said her office will issue a code later this year based on ASHRAE 189.1, which is similar to LEED Silver. (As you may know, ASHRAE, a building technology society founded in 1894, created the 189.1 standard for multistory, high-performance green buildings.)

"We see the convergence of a huge energy demand with 200 years of technological innovation. So we’re trying to do this in the building space as well. We’re looking at microgrids and energy storage. We’re trying to address what we see as [a] market failure, which prevents us from using some technologies," Robyn said.

Defense officials are looking into technologies that may be compatible with their goals and are working with manufacturers to iron out wrinkles preventing large-scale adoption, she said.

For instance, the DOD is experimenting with "smart glass" that uses electrochromic technology for windows, which allows them to go from transparent to translucent when activated, controlling the amount of light and heat transmitted. As a test, the DOD is installing these windows on three sides of a building at the Marine Corp Air Station Miramar in San Diego.

"We’re feeding the data back to the manufacturers, who have never gotten this kind of feedback from customers before, so they can address issues," Robyn said.

Google, on the other hand, is focused on enhancing the quality of work life for its employees.

Ravitz said the motivation to improve buildings is rooted in treating its employees as its biggest assets and retaining top talent, which is always a challenge in Silicon Valley. "We want people to want to come to the office – that’s our idea," he said.

Google has one of the largest fleets of shuttle buses in the Bay Area, which runs on biofuel and gave 1 million rides to employees in 2011.

Ravitz heads the company's healthy materials program, through which the component materials used in office buildings, furniture, equipment and supplies are vetted. He sends survey questionnaires to manufacturers asking what goes into their products.

The program, launched two years ago, has brought about some healthy changes, but – even though it's received plenty of feedback – faces a huge challenge when it comes to collecting all the data.

"We don’t think it should be so difficult," Ravitz said. "You go to a grocery store, you can read the ingredients in a Snickers bar. But for a chair or table, we don’t know and we don’t get to decide. In Google’s case, I’m the gatekeeper and I feel it’s very important to select materials carefully."

Until now, Google has occupied existing buildings so it's been focused on improvements. In the future, new construction will enable it to take a more integrated approach, Ravitz said.

Top photo courtesy of Yuriy Chertok  via Shutterstock. Photo of Robyn and Ravitz from VERGE DC taken by Goodwin Ogbuehi for GreenBiz Group.

How Google gets the most from green buildings

3 things I learned about convergence at VERGE