What rolls on only two wheels, but can’t be toppled? No, it’s not a Segway. But it does look a little like a Tron-inspired light cycle. The answer is Lit Motors’ C-1 virtually uncrashable electric motorcycle.

At GreenBiz’s VERGE DC confab last week, Lit Motors founder Daniel Kim made a case for why this super-stable electric motorcycle may just succeed where the Segway failed – and why it has the potential to accelerate our breakup with internal-combustion-powered four-wheelers.

What makes Lit’s C-1 so VERGE–y is that it’s a mashup: It combines old-school motorcycle design with cutting-edge sensory and stabilization systems.

The stabilization systems evolved from the digitally controlled gyroscopes first used to stabilize the Hubble Space Telescope. The C-1 uses a pair of advanced gyros as the foundation of a covered, electric motorcycle that -- for all intents and purposes -- can’t be knocked over. Sounds ridiculous? Well, check out the scale models in this video to see how it works:

Here’s how Lit explains the techno-mojo behind all that stability trickery:

Utilizing electronically controlled gyroscopes located under the floor (putting out over 1,300 lb/ft of torque), the vehicle balances at a stop and stays upright in the event of a collision. In-wheel electric motors (40 kw) provide the power and regeneration, while hub steering keeps you pointed in the right direction. With a top speed of over 120 MPH and battery packs providing 200 miles per charge, the C-1 is perfect for commuters and city dwellers alike.

Since 2010, Kim’s team of nine has logged nearly 20,000 hours developing the C-1 and its constituent technologies. In the process, they’ve applied for 13 patents and designed a compact manufacturing operation -- all on a budget well south of $1 million. Talk about lean innovation.

Kim is aiming for something that transcends slick electric motorcycles. Like a growing generation of transportation thinkers, he sees traffic as a vicious problem that’s seen very little real innovation during the century-long reign of the car. Given that three-quarters of vehicles are driven alone, converting them into the smaller footprint of single-passenger C-1s could effectively free up half of our existing road capacity. 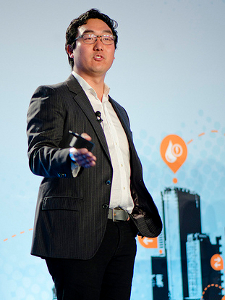 The gains could go further, too. Imagine if the C-1 were mated with the autonomous vehicle systems being developed by the likes of Google and Audi, which promise to reduce congestion by optimizing vehicle behavior. The result could be agile, self-driving robot cars whizzing along fast-moving, jam-free roads. That is, at least until the inevitable robot rebellion.

Back to the C-1. As a motorcycle and bicycle-loving technophile, it’s hard for me not to enthuse about this tantalizing technology. But in truth, the transportation world is littered with achingly smart gizmos that crashed and burned. High atop that list, of course, is Dean Kamen’s Segway, a two-wheeled, self-balancing scooter packed with such blinding promise that Time magazine judged it a “reinvention of the wheel.” Yet these days, Segways are exiled to duty on Paris’ lazy-tourist circuit.

To be fair, the C-1 gets right much that was wrong with the Segway. The Segway promised to revolutionize urban transportation, but was quickly mired in legal wrangling over whether it belonged on sidewalks or roads. The C-1 clearly belongs on roads. The Segway was open, exposed to the weather, while the C-1 is sealed like a car.

Another problem was that the Segway offered a costly solution for shortish journeys, for which plenty of perfectly good, cheap alternatives exist – feet, bicycles and buses, to name a few. In contrast, the C-1 looks to be a true alternative for distant commutes. Kim emphasized that its range would more than cover the average U.S. daily commute.

And don’t underestimate the cool factor. Aside from the above-mentioned reasons, the Segway also was doomed by a chronic case of “I’d be embarrassed to be seen on it” design. It screamed park ranger. Conversely, the C-1 stirs science-fiction dreams. In a chat after his presentation, Kim explained that the fab shop that produced the Tron lightcycle for the recent remake of the sci-fi film helped to build the first C-1 prototype.

Of course, the C-1 has a long way to go to reach the market, and many speed bumps, detours and dead ends can crop up on the road from lab to factory. Passing federal safety and classification standards are costly obstacles. Then there’s the marketing challenge: It will still have to overcome the Segway curse.

Yet, really, it all comes back to one basic question: Who wouldn’t want to commute on a light cycle?

You can put down a deposit on one for as little as $250 at http://litmotors.com/reserve/. Kim is hoping the first commercial models will roll out on U.S. roads in 2014, priced in the neighborhood of $24,000.

Day One: Photos from VERGE DC