Starbucks’ latest self-assessment of the impact of its operations on the globe -- measured in terms of energy, the environment, communities and agriculture -- reflects healthy progress, moderated by a dash of frustration on some challenging fronts.

Call it: A few full cups and a couple half empty.

The good news is big gains on renewables, energy efficiency and cup recycling. Water consumption rose, however, and use of reusable cups has barely budged.

At its annual shareholders meeting today, Starbucks released its 11th annual Global Responsibility Report, detailing the coffee giant’s performance in 2011. Check out the report at www.starbucks.com/GRreport. I got an advance look at the report, along with the opportunity to speak with Ben Packard, Starbucks’ vice president of global responsibility.

Front-of-store recycling. Starbucks has been chiseling away at a commitment to boost the recyclability of its cold and hot beverage cups for many years. It has set interlinked goals of developing “comprehensive recycling solutions for our paper and plastic cups by 2012” and implementing “front-of-store recycling in our company owned stores by 2015.” (Starbucks has nearly complete recycling rates for cardboard packaging from its receiving, replenishment and other back-of-store operations.)

The goals are daunting: About 80 percent of the Starbucks’ containers leave its stores and, of the share that can be re-captured on site, recyclers have shown little love for the hard-to-reprocess plastic-lined paper cups. (The chain's plastic cups, made of No.1 plastic, are proving somewhat easier to sell into recycling flows.)

Boosting recycling of paper cups, in particular, has required near herculean efforts -- not just putting out a bin in the front of a store, but ensuring that haulers and recyclers in a given market will take the cups and process them into new materials. The chain has piloted recycling in a variety of cities, including New York in 2010, an effort profiled by Jonathan Bardelline in GreenBiz here.

As one of a series of city-by-city trials, Starbucks has run a pilot in Chicago area stores, for example, to take used cups, and remake them into napkins that come back to the store. To lick this problem, the coffee chain has instigated three industry wide Cup Summits, inviting competitors, peers and service providers to collaborate on recycling solutions.

The efforts are showing progress. In 2011, Starbucks saw a big gain in the share of its stores with front-of-store recycling, to 18 percent of company-owned stores in US and Canada, up from 5 percent in 2010. The number of sites where you can drop your white and green cup into a recycling bin now exceeds 1,000.

The fastest progress, Packard said, has been in “big markets where conditions were right in terms of hauling, recycling infrastructure and demand for end products.” These include most of Canada, Chicago, and parts of Southern California.

Energy per store and LEED. After resetting its energy efficiency targets in 2010, the chain made big gains over the past year. Working towards a goal of cutting its energy intensity by 25 percent by 2015 against a 2008 baseline, the coffee giant’s progress is gaining momentum.

It notched an improvement of 7.5 percent, bringing down to 6.29 kwh the average electricity used per square foot per store per month in company-owned stores in the U.S. and Canada. In 2008, that figure started out at 6.8 kwh

The biggest slice of those gains, Packard explained, came from replacing in-store lighting with LEDs. 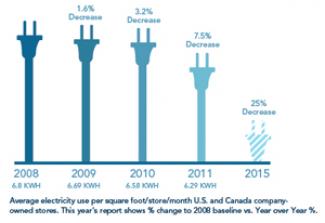 The next frontier of efficiency, he explained is wiring up stores to enable real time remote monitoring and control of HVACs, ice makers and other big energy users.

In a related development, Starbucks reported that three quarters of its newly built company-owned stores (121 of 161) have achieved LEED certification. That share is constrained, Packard explained, in part because Starbucks has limited control over the environment of some its buildings it leases space in.“

Renewable energy. Towards a 2015 goal of buying all of its electric power from renewable sources, the coffee chain reported a big increase in the total volume of green power it bought in 2011: 873 megawatt hours (mwh), up from 580 mwh last year.

Yet despite that big uptick, the share of renewables of total power the company reported appears to have retreated to 50 percent, from 58 percent last year.

What gives? Previous data covered U.S. and Canada only, while for 2011 the coffee chain tallied up its global purchase of renewables -- a good move.

Water. In past years, Starbucks has made laudable gains cutting the volume of water used in its outlets by, for example, by shutting off the all-day flow of water through “dippers,” used to rinse kitchenware. 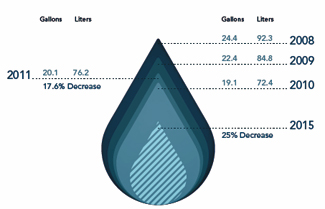 From 2008 through 2010, those efforts cut water use by nearly a fifth, to less than 20 gallons per square foot of retail space per month.

But in 2011, that figure edged back up by 5 percent. While some of the culprit was higher sales of beverages, the main culprit, Packard told me, are revisions to the way pitchers are cleaned.

That’s under close scrutiny for next year. Plus, “We’re working with equipment vendors to see what we can squeeze out there -- from water filtration, to ice makers, it all adds up,” said Packard.

Re-useable cups. One of the biggest steps Starbucks could take to lower the impact of its operations would be to get its customers to switch to reusable tumblers. Even though its cups are made of 10 percent recycled pulp, the billions of hot beverages it serves annually translate into virgin trees being cut, pulped, cooked and formed into paper -- a very energy intensive process.

Yet breaking customer’s cup-to-go habit remains one of the most stubborn tasks on Starbuck’s eco-punch list. GreenBiz first highlighted the slow progress in 2010.

The chain served just 1.9 percent of total beverage sales in reusable containers last year. That figure has barely budged since 2009, when it debuted at 1.5 percent. That same year, the chain set out a goal of serving 25 percent of beverages in “reusable serverware or tumblers” by 2015.

With this report, Starbucks has revised that target: To serve 5 percent of beverages in “personal tumblers” by 2015. 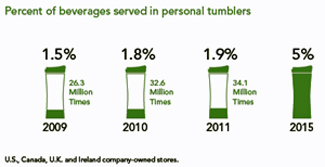 Packard explained that the goal has proven elusive for a number of reasons. Given that about a fifth of sales are consumed on the premises, “We thought we could effectively boost the use of in-store ceramics,” he said, to make up the bulk of that 25 percent goal. Yet that’s proven challenging: Shrinkage from breakage and theft of the mugs is another barrier.

Spurring the use of tumblers isn’t much easier. Starbucks trialed some behavioral incentives to boost tumbler use in Seattle test sites, but found the response lower than it hoped for. Starbucks currently offers customers a dime discount if they bring their own mug.

For 2012, Packard said, the chain is rebooting efforts to encourage the use of ceramic-ware in store. The latest store designs position reusable mugs in plain sight behind baristas, cuing customers to opt for ceramic and accelerating order processing.

Increasing the value of the 10-cent cup discount isn’t something Starbucks is likely to tinker with. “I don’t think it’s the amount, necessarily” said Packard, “Charging 5 cents for plastic bags wasn’t what triggered the big switch there. It was part of a larger behavioral shift."

Fair point. But I’m not sure Starbucks should let go of that lever. In the case of plastic bag fees, the value of that nickel charge was probably less important than the repetition of the message that the bag comes at a cost.

Makes me wonder: Perhaps a similar tact could drive greater change at Starbucks? Rather than only reward the virtuous behavior of bringing in a tumbler, why not also identify more clearly the cost of each paper cup in an order.

Without changing prices, the chain could, for instance, simply break out a nickel “cup cost” charge on every receipt. It’d be critical to communicate to consumers that this isn’t an extra fee, but an existing cost they can avoid -- and then some -- by bringing in a tumbler. It’s worth a shot, or two.

I’ve focused mostly on resource use and recycling here. Starbucks has also reported progress in its coffee farming and processing program, labor and community issues. Here’s the company’s summary of its work:

Youth Action Grants: Starbucks exceeded its 2015 community goal to engage 50,000 young people in community activities by engaging more than 50,000 in 2011.

Coffee Purchasing: Increased purchases of coffee sourced under C.A.F.E. Practices from 84 percent to 86 percent in 2011.

Farmer Support: Starbucks provided $14.7 million to organizations that make loans to coffee farmers, working toward a goal of $20 million by 2015.

Forest Carbon Programs: Continued work in coffee-growing communities in Chiapas, Mexico, and Sumatra, Indonesia, through Starbucks partnership with Conservation International, demonstrating how coffee farmers can adapt to and address climate change while increasing their income.

Community Service: Starbucks put a special focus on community service for its 40th anniversary celebration. In 2011, Starbucks more than doubled the number of hours from the year before with 442,000 hours contributed. Starbucks is working toward its goal of generating one million hours annually by 2015.

Photo of a latte via Shutterstock.com. Infographics courtesy of Starbucks.

How Starbucks plans to reduce its paper cup waste