Contest winners Aditazz, Mazzetti Nash Lipsey Burch and Perkins+Will, whose selection was announced this morning, will now help the health care giant design a small, 100-bed hospital -- mostly likely in Southern California -- with a net-zero environmental impact and a target date for ground-breaking within the next five to eight years.

"We did not expect that we would have tie winners," said John Kouletsis, Kaiser Permanente's vice president for facilities planning. "But we have phenomenal teams here. Together they will come up with a hybrid solution that will go leagues beyond what each team would do individually and way beyond where Kaiser would have gone alone."

The year-long competition is part of Kaiser's sustainability campaign to bring more environmental and social responsibility to its operations from its facilities -- which feature prominent programs on renewable energy, waste reduction and community health -- to its supply chain.

The idea of sustainability melds with Kaiser's focus on a more holistic approach to health care, one that's aimed at engaging the members of its health care plans to make better choices in diet, exercise and stress management with help from Kaiser care providers in order to promote wellness. The rationale is that if you help people live healthier lives, fewer of them will need to stay in hospitals -- facilities that consume huge amounts of energy and water and have a considerable environmental footprint.

The notion of building up a healthier clientele, rather than just treating the sick, is at the core of the small hospital concept. Ideally, such facilities would feature fewer beds but a more comprehensive array of client services without compromising expectations for medical care. 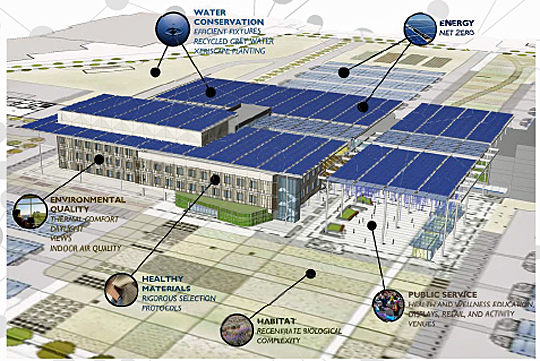 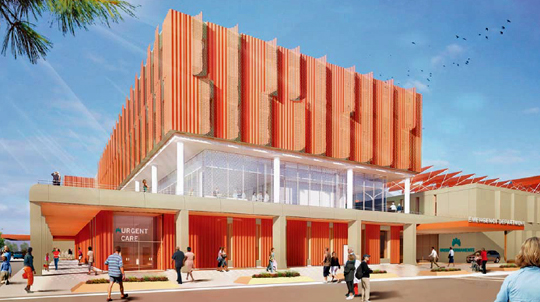 Kaiser, a leader in efforts to green the health care industry, sought help in coming up with new ideas in hospital design that would address sustainability from a 360-degree perspective and meet the needs of a population that expects more, faster, highly connected and tech-smart service from health care providers, Kouletsis told me during the course of the competition.

That's why KP decided to open its doors to ideas from all comers with the "Small Hospital, Big Idea" competition. While open-sourcing innovation has become the thing for culling cutting edge solutions from a broad pool (witness the success of the X PRIZE and GE's Ecomagination Challenge competitions), it is a new and different approach for the health care industry, which, Kouletsis points out, is better known for risk aversion than innovation.

Kaiser also went one step further in its open call for innovation, the winning teams told me in an interview yesterday. It did not harness concepts to a specific cost per square foot parameters and told contestants that the organization would consider designs that might entail more upfront costs than traditional building plans as long as the lifecycle costs and environmental impacts would be greatly reduced.

"The exciting thing for me," said Aditazz co-founder Zigmund Rubel, "was that although this [competition] was for prototype production, the context was about innovation and aspiration. We could walk the line between the futuristic, what could be, and what is real."

Walter Vernon, a principal at Mazzetti Nash Lipsey Burch, and Robin Guenther, a principal, Perkins+Will, said the contest offered them "a way to really push boundaries" for sustainable design in health care facilities.

M+NLB and Perkins+Will worked together as a team to submit an entry in the competition and their concept focuses on "restorative and regenerative" design that helps heal the environment as well as people, Vernon and Guenther said.

"What we see in health care is that there are small experiments around that (the idea of restorative and regenerative design)," said Guenther. "But this competition offered us the chance to really put those ideas into action as a single solution. It's sort of a brave new world for health care, it's different than a (traditional) hospital."

"It's a health discovery center," Felicia Cleper-Borkovi chimed in.

The final plan for Kaiser's small hospital will draw from the concepts submitted by the two teams and, as Kouletsis noted, is expected to pluck the best ideas from each in order to create a design that is different and goes farther than their original visions.

Members from all three firms have deep experience in health care design and several have worked with Kaiser on projects during their careers, including the Kaiser medical center in Santa Clara, Calif., (pictured at top) which is a flagship for sustainable design within the health care company.

Here are some of the proposed features that made the concepts from the winning teams stand out from the 108 entries in the competition. The designs:

In selecting the winners, the content judges were looking for more than concepts that would satisfy KP's demand for sustainable design and innovation, Kouletsis said. Kaiser wanted teams that would work "in that spirit of challenge and innovation to constantly challenge us and ask the uncomfortable questions" that are expected to keep the health care group on track with its commitments to sustainability and patient care, he said.

After intense examination of the concepts and their creators, the judges debated among the offerings and chose the ones that not only had the greatest potential, but also took KP out of its comfort zone

"There's a point at which you have to hold hands and leap," Kouletsis said. "That's what we did."