Public companies are often accused of short-term thinking, and rightfully so. Not Darden, the world’s largest full-service restaurant company.

The company, which opened its first Red Lobster restaurant in 1968, has spent nearly a decade researching ways to grow lobsters in captivity because the world’s supply of wild lobsters is, obviously, limited.  This spring, the company said that it would develop the world’s first commercial-scale lobster farm in Malaysia, a $650 million venture built with a local partner that won’t start harvesting lobsters until 2017. The facility isn’t expected to reach full capacity until … 2029. That’s long-term.

“We have to be thinking out at least five years, given the volumes we buy,” says Roger Bing, vice president of seafood purchasing for Darden. “As we grow our restaurants, where are we going to get the lobsters to meet the demands of our guests?”

It’s not just lobsters, of course. (And this year’s New England lobster catch, as it happens, has been plentiful, if occasionally off color.) Darden buys lots of shrimp, salmon, crab and tilapia, too -- an estimated $850 million worth of seafood per year, part of a grocery budget of about $2.5 billion that it spends with 2,000 suppliers in 35 different companies. Yes, this is a very big company. It owns or operates about 2,000 restaurants, serves more than 1 million people per day and employs about 180,000 people, making it one of the 30 biggest private employers in the U.S. Its brands include Red Lobster, Olive Garden, Longhorn Steakhouse and the health-conscious Seasons 52 (where, as it happens, my wife and I recently ate for the first time, and really enjoyed our meal).

I got Roger Bing on the phone last week to talk about seafood and sustainability, which has been on my mind lately. (See my last two blog posts, Deep sea farming and Endless Shrimp? Alas, no…) Darden recently released its 2012 Sustainability Report, which explores the company’s impact on “people, planet and plate.” The company has been recognized by FORTUNE as one of its 100 best companies to work for, and it has set energy, water and waste reduction goals (albeit relative to its growth, and not in absolute terms). But because Darden is such a big buyer of seafood, that’s where the company is likely to be able to have its biggest impact. When it comes to seafood, restaurants matter even more than supermarkets in the U.S., because roughly 65 percent of seafood eaten by Americans is consumed outside the home.

Photo of red lobster courtesy of Isantilli via Shutterstock.

Having read the report and interviewed Roger,  I’d describe the company’s record as good -- but not as good as it could be. To its credit, Darden buys only species of fish approved by the New England Aquarium. (It won’t sell orange roughy, bluefin tuna or swordfish from the south Atlantic, among others.) Where possible, the company tries to work directly with its suppliers to encourage them to meet third-party safety, quality and sustainability standards. “Our strategy is to get as close to the water as possible,” Roger told me. “It helps us influence the quality, and the way the product is harvested and processed, and the environmental factors.” Eliminating the middleman also saves costs, he noted.

So what’s not to like? Well, Darden sells some species of fish, such as farmed salmon, that aren’t recommended by the preeminent seafood-buying guide, the Monterey Bay Aquarium’s Seafood Watch. It supports, and abides by, a set of aquaculture standards, set by the Global Aquaculture Alliance, that some critics say are not stringent enough. (This is a complicated and controversial issue. For more, see my story at the Yale Environment360 website, Shrimp Farms' Tainted Legacy is Target of Certification Drive). When I asked Roger about the tougher standards for farmed fish now being put forth by the Aquaculture Stewardship Council, he told me they are “duplicative” and “inefficient” and would put too much of a burden on producers. The question, as I see it, is whether the company wants to put its weight behind a tough standard to promote best practices, or as broader standard that eliminates bad actors but doesn’t push the industry as hard as it could or should.

Maybe the most interesting challenge facing Darden revolves around what kinds of fish to sell to its customers. If you believe, as I do (and as Roger does), that aquaculture will be critical to meeting demands for protein in the future, then you want to encourage people to eat fish that are very efficient at converting feed -- that is, fish meal, which comes from small forage fish captured from the ocean -- into the fish that ends up on the diner’s plate. Some fish, like tilapia and barramundi, are more efficient than others at converting feed. Salmon are not as efficient, although they’re getting better. 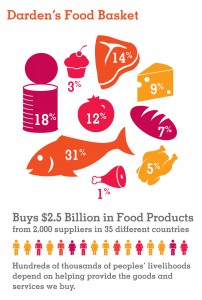 I asked Roger about barramundi. “It’s a great species, a species of the future,” he said. “We’ve tried it on our menus.” So how did it do?  “Not well. People didn’t go for it.” The strangeness apparently put off diners. “In these economic times, people are very cautious about their spend[ing],” Roger said.

Tilapia is a happier story. ”We initially tried tilapia and it failed miserably,” Roger said. But the company worked with suppliers to improve the quality of the fish. Now, he said, “it’s a very nice white fillet that basically has no flavor at all,” and adapts well to sauces. It’s selling well.

Is it Darden’s obligation to  nudge its customers towards choices that are better for them and for the planet? I’d say yes. Others may disagree, saying all we can ask of a company is that it give customers what they want.

When it comes to lobster farming, Darden is focusing on a species of lobster commonly known as spiny or rock lobster, which, unlike New England lobster, grow in warm water and are native to the Malaysian region. They’re better suited for aquaculture because they grow faster.