When the first Cracker Barrel store opened in 1969 on I-40 in Lebanon, Tenn., it dished up the same southern-style fare that entices road-trippers into 600 locations across 42 states today. Chicken fried steak and homemade cornbread are still served, although gasoline came off the country store’s menu in the mid-70s when the oil embargo hit.

Today, more than 32 Cracker Barrel locations are back in the business of offering fuel, but this time from a new source of domestic energy: eVgo electric vehicle chargers.

Thanks to a partnership with NRG EV Services, the operator of the eVgo network, Cracker Barrel, along with Texas retailers Whole Foods, Walgreens and HEB, are now providing customers with “Freedom Station sites,” a solution to curbing range anxiety in EV drivers. By offering Level 2 and DC fast chargers capable of delivering up to 30 miles in 10 minutes, Freedom Station sites are giving highway travelers a chance to recharge their batteries — and do a little shopping.

NRG Energy, a Fortune 500 company that owns and operates one of the nation's largest and most diverse power generation portfolios, plans to install 70 Freedom Station sites in the Dallas/Ft. Worth area and 50 in the Houston area, with 26 already in place across both cities. In this Q&A, president of NRG Energy Services Arun Banskota lends some insights into eVgo Freedom Stations and strategies his company is employing to abolish barriers to EV adoption:

Anna Clark: How would you describe where eVgo fits within NRG Energy?

Clark: Why has the company gone in this direction?

Banskota: Everything NRG has done has been in the first-mover competitive space. This means we’re very close to the consumers and hopefully learning much faster than our competitors.

Clark: What successes can eVgo share with other emerging cleantech companies? 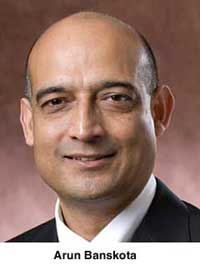 Banskota: When you look at the EV space, it looks like everything is aligned. The environmental piece is aligned, national security is aligned, and so is cost.

A 2011 Bloomberg study using Kiplinger’s Green Car Calculator, in fact, shows that the Nissan Leaf is already the most affordable mode of transportation when looking at the five-year cost of ownership with gasoline at $3 a gallon. But one of the big challenges we have is changing people’s mindset. It’s different from what we’ve been doing for the last 100 years. Changing that paradigm to a point where you move the filling station to your home and pay less for charging an EV requires changing behavior from the way it’s always been done.

Clark: What is NRG EV Services doing to shift people’s thinking, from “filling up” to “charging up”?

Banskota: We spent 161 days last year changing public’s mindset, going to public-facing events like the Houston rodeo and the State Fair of Texas. We usually set up an eVgo tent and network map, and then we familiarize people with how an EV works. How do you charge? How long does it take? Answering these types of questions in one-on-one conversations has been critical.

Image of green plug by Branche via Shutterstock.

Clark: How do you rate your success in changing perceptions?

Banskota: The results have been mind-boggling. The number of people who say they would consider EV ownership after learning about the eVgo network jumps from around 10-20 percent before meeting with us to 55-60 percent afterwards.

Clark: So would you say this grassroots activity has been more useful than advertising?

Banskota: When you’re talking about driving public awareness, it all helps. Grassroots, advertising, all of it.

Clark: What about messaging? What do you do to ensure your messages resonate with your audience?

Banskota: The commonalities among all of our subscribers is how much fun the EVs are. Whether it is the cost savings, the instant torque, great performance or environment, they enjoy the cars.

Clark: Who is your target customer? Is it early adopters or are you trying to mainstream the EV?

Banskota: There’s a huge amount of customer segmentation that goes on in the car industry. You really have to talk to an EV driver to get a sense of why they chose it. In fact, among the many reasons we started our business model in Houston and Fort Worth is to get out of the early-adopter phase. We don’t want a false positive of getting only early adopters. The market in Houston and D/FW is much more realistic and practical. A lot of folks in our subscriber base keep tallied charts including driving habits, charging usage and really see this as a way to save money on gasoline.

Clark: Outside of marketing, what is your company doing that is unique?

Banskota: NRG Energy has installed one-third of the DC chargers in the United States. In Houston, for example, we already have 15 in operation, which help EV drivers get up to 50 miles in 15 minutes. There is no metropolitan area in the country that has a greater concentration of DC Fast Chargers than Houston, and we're still building. Each Freedom Station includes both a Level 2 and a DC Fast Charger, meaning we now have 30 public chargers. Additionally, in the Dallas Fort Worth metroplex, we have 11 Freedom Station sites in operation and more under construction. We absolutely think that the presence of these public charging stations is making the interest in EVs explode. The chargers now lead people to call us.

Clark: Can you give us some insights into any other strategies that are unique to the industry?

Banskota: Consumers are demanding customized plans. To meet them where they are, we try to create as deep an ecosystem as possible. We’re monitoring usage and gathering information to get a handle on the driving patterns in Houston, Dallas-Fort Worth, Washington-Baltimore and California. We offer different programs based on customer needs for residential, multi-family, Park ‘n Fly at D/FW airport, and so on.

Also, having good retail partners has been key, because our Freedom Station sites must be open 24/7. Walgreens and Cracker Barrel have been very open to new ideas. When we approached them, there was a lot of discussion. The EV space remains so new. But once we put the first Freedom Station in, they wanted one in every one of their stores.

One of the signs of progress is monitoring customers’ activity at Freedom Station sites. This has been huge for retail partners. They are convinced that it brings customers in stores and increases customers’ time in their locations. At the same time, our retail partners offer eVgo subscribers an opportunity to pick up a prescription or have a great meal while charging their EVs. We meet with these partners on a quarterly basis to review strategy.

Clark: I can see how successful you’ve been in changing behavior. Are there still technical hurdles to EVs that are causing resistance, such as batteries?

Banskota: We’re going to see a revolution in battery technology. There’s a huge amount of investment going into the battery space. You’re going to see progress on a lot of fronts, including battery density.

Clark: And what about innovations such as plugless EV charging?

Banskota: We’re following it and when we think the technology is ready for deployment, we’ll definitely take a serious look at it.

Clark: Overall, do you see some encouraging signs of progress in the marketplace?

Banskota: Absolutely. The EV numbers are increasing not as fast as we had hoped, but they are increasing. If you look at the media and see negativity, you’ve got to take into account that it depends on the angle. For example, they could say that only 18,000 EVs were sold in 2011, but that is still a huge success. In fact, American consumers bought 70 percent more all-electric Nissan LEAF vehicles and 35 percent more Chevy Volts during their introductory year, compared to the initial year of sales for the Toyota Prius. As people start getting more comfortable, whether through advertisements or word of mouth or seeing other people driving EVs, the numbers keep on increasing.

The fact is, people are looking for a way to make a difference in a number of areas. Tailpipe emissions, for example, represent 40-50 percent of all emissions. EV ownership gives us a whole new way of participating in things that matter to us.

Clark: And what about you? What is your favorite EV?

Banskota: All of them! Our business model is to serve everyone.

Check out the video on Cracker Barrel and eVgo.

Did NRG unfairly get the keys to California's EV future?