Assessing the state of a 'Clean Tech Nation'

Assessing the state of a 'Clean Tech Nation'

Editor's note: The future of cleantech technologies will be further discussed at VERGE @ Greenbuild, November 12-13 in San Francisco.

The cleantech industry, at least as the term has come to be defined, is about a dozen years old. That’s adulthood, if not middle age, in technology years, and it hasn’t exactly been a charmed life. The markets for clean energy, transportation, water, and materials have evolved in fits and starts. There’s been a lot of hype, an impressive amount of progress, and a great deal of pushback in the form of political controversy and an industry shakeout that is natural to every emerging technology.

Ron Pernick and Clint Wilder have been watching it all from their perch at Clean Edge, a 12-year-old research and advisory firm focusing on clean technology. (Note: Pernick and I co-founded the company in 2000, though in recent years I have been involved primarily as an advisor.) Five years ago, the two co-authored The Clean Tech Revolution, one of the first books to frame the cleantech business opportunity. Now comes the sequel, Clean Tech Nation: How the U.S. Can Lead in the New Global Economy. It takes stock of the cleantech marketplace and what it will take for the United States to be a competitive player in the years ahead.

I recently talked with Pernick and Wilder about the state of cleantech, the political reality, and the outlook for cleantech markets overall. Here's an edited version of that conversation.

Joel Makower: Things have changed a lot since your last book. I was wondering if we could start off by getting your take on the state of cleantech since The Clean Tech Revolution.

Ron Pernick: The biggest change has been the politicization and partisanship of cleantech. I think if you look at the city level, at the state level, there's a lot of support for cleantech, but I think when you get to the federal level, and right now if you look at the national campaign that's being waged, both clean and green have become, in many ways, four-letter words. So, that's one of the huge shifts. 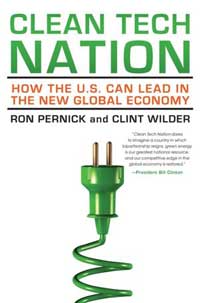 The other big shift is on the industrial side of the equation. While all of these venture capitalist-backed companies are getting funding, not all of that has come to fruition. On the other hand, the large industrials, from GE to General Motors to Siemens — that's where we're seeing a lot of activity now. We're looking at numbers that show it's becoming an increasingly large, double-digit percentage of major corporate and large government activity.

So, for us, five years later, whatever you want to call cleantech — green tech, sustainable tech, advanced energy, whatever — the industrials have embraced it and they see it as their next major push.

Clint Wilder: To me, a big historical moment in this industry was Total's purchase of the controlling interest in SunPower. So you have one of the world's largest oil companies saying, "Hey, we're in the energy business, and these guys at SunPower have assets that we see as key to our role as an energy company moving forward in the next decade and century." I think you will see that with a lot of other large companies, saying, "We're not looking at this election cycle or this particular government loan to whatever company. We're looking at cleantech as a long-term business proposition.”

Makower: So, that’s the supply side — companies that are in the cleantech business trying to sell cleantech products and services. What about the demand side? I mean, if a lot more companies are now in the business, who are the customers? Where do you see the markets opening up — and not just in the United States?

Pernick: I'm glad you asked the question because this where the policy piece does come in. In the U.S., the renewable portfolio standard, whether it's in my state or a neighboring state, has been a huge driver of growth, in particular for the wind industry. You’ve now got more than six states that get 10 percent or more of their electrons generation from renewables, not including hydro. States like South Dakota that were at about 5 percent renewables three years ago are now at 22 percent. So, that's one area where governments are playing a role on the demand side.

On the other hand, you have consumers driving this, whether they live in Japan or the U.S. or China. The Toyota Prius, as we point out in the book, is the third-bestselling car on the planet today. So, consumers, whether it's green building, energy-efficiency retrofits, or cars — they're purchasing those.

The other thing that I see driving cleantech are new business models. I’m thinking about SolarCity or SunRun or Sungevity, which are employing hundreds of people that are basically leasing electrons to folks rather than selling them solar equipment. The business model basically says, "We’ll get you solar electrons on your rooftop for the same or less than what you're currently paying from your utility.” It is so compelling that it becomes a no-brainer. It has nothing to do with the environment and everything to do with the pocketbook.

Wilder: It's also large, utility-scale solar. The number of large solar installations, 10 megawatts or more, has increased dramatically. There were only a small handful just a couple of years ago. The solar story is that if you happen to be in the business of trying to compete in selling low-cost solar panels, that's a really tough business right now. But if you're on the downstream side, where you're buying and/or installing it, it's boom time.

Makower: You've been talking about the last few years. I'm wondering where cleantech markets go from here — and by the way, not just for solar, or not even just for energy. Where do you see the next wins in cleantech market development?

Pernick: In the book we talk about four major emerging trends. One is the electrification of transportation, not just all-electric vehicles, but hybridization. If we're going to meet new CAFE standards, the near doubling increase of the overall fleet in terms of efficiency, the only way we're going to get there is with the hybridization, as well as the electrification of transport. We think there's a lot of activity there, along with energy storage. We also talk about green buildings, and in particular deep retrofits.

One area that we think is very compelling over the next three to five years is the whole concept of industrial ecology, with waste as a resource. I'm not sure we'll go as far as having Waste Management pay us to take our garbage away because it's such a valuable resource, but I think waste resources are going to be used for numerous purposes.

Makower: So, what’s the cleantech killer app going to be — the thing that helps bring cleantech to the masses.

Pernick: I don't think there will be one killer app. I don't see the energy industry ever being about one thing. Even today, there's no one energy technology that dominates. It's probably better there is no silver bullet, that this is a diversified infrastructure we're talking about. We said that in our first book and we say it now: There will be breakthroughs, but we actually think most of the technologies are already kind of there. The people who are saying renewable energy is not ready for prime time just don't know what they're talking about. Solar competes at the retail level in many markets, and it's only going to get better over the next three to five years.

But if you’re really ask, "What's going to change this?", we think our seven-point action plan is a bipartisan, realistic prescription for how the U.S. can keep its mojo in cleantech. We've had people on the far right agree with a lot of the elements of our plan. We've had people on the progressive side, we've had people right in the middle, so this isn't rocket science, really. A national renewable portfolio standard that doesn't supersede the rights of states would be a great place to start. Is that going to happen in the next two months? Of course not. Is it going to happen after November? It depends how everything shakes out.

The solutions are not always as sexy as a killer app. Maybe cleantech was really sexy 10 years ago. Now it's about industrial uptake.

Wilder: I agree that there's not a killer app, but we need a killer shift in the conversation. In his acceptance speech Mitt Romney made a joke out of climate change and oceans rising, and tying that to, in effect, "Isn’t this renewable energy stuff silly?" Well, talk to the Republican governor of Kansas about how many wind power jobs are in his state. I've watched the conversation unfold about the wind production tax credits, with one Republican governor after another in the Midwest saying they don't agree with Romney's opposition to it. This is about jobs and economic growth in those states. I mean the U.S. Chamber of Commerce, for God's sake, is in favor of renewing the tax credit. So, it's sort of a model for the conversation that we'd like to see nationwide about all of cleantech. This is not tree huggers and it's not political cronies who want to start solar companies. This is about jobs in the heartland, jobs throughout the country, and what's creating economic growth and economic wealth creation.

Pernick: I love this part about this killer shift in opinion. This is really about leadership. And not just in the United States. China is ripe for an environmental movement. It's going to be very difficult to see that unfold there because of how totalitarian it is, but a lot of people I'm talking with in China say things are starting to shift and people are asking for clean air and water, as well as economic growth. So, I think this whole idea of leadership and whether it comes from individuals, whether it comes from your public officials or corporations — that's what's going to cause the shift here. We've been on shaky ground in the past year or two for cleantech, and a lot of people are running in scattered directions. My sense, and I am a pragmatic optimist, is that things will turn around after the election, and we'll start to get a more serious discussion going again.

Makower: You sort of answered what was going to be my last question: Are you more or less optimistic about cleantech right now than you were when your last book came out?

Wilder: I'll dodge it skillfully and say that I'm coolly optimistic. But it's a different kind of optimism because, as we've talked about, things have changed a lot in five years. It's a more mature industry. The conversation is different. We're not pushing climate as our political driver anymore. And because of that maturity and, quite honestly, the shaking out, with weaker companies going out of business — that's what happens in maturing industries. It doesn't mean you throw the whole industry out.

This cleantech revolution is going to go on with or without the United States. We see that all over the world.

The Hottest Jobs in Cleantech and Where to Find Them

Where are America's greenest buildings?