Personal computers are ubiquitous in our everyday life. We all rely on them and, in fact, it would have been impossible for me to write this without one. It is one of the great success stories of our time.

Most people are aware of Moore's Law — that computing power doubles roughly every 18 months. What most people don't know is that the electrical efficiency — the number of computations that can be completed per kilowatt-hour of electricity used — also doubles every 18 months. This is great news in a world where carbon emissions need to be reduced and energy costs are rising.

However, while electrical efficiency and computing power seem to be rising at a constant rate, the growth in the sales of PCs is accelerating. The number of computer units shipped has increased from 135 million in 2000 to 355 million in 2011. This is predicted to rise to over 700 million by 2016 (including tablets) — fantastic growth rate by any measure. In the last decade sales doubled. In the next five years they are predicted to double again. Is this growth rate sustainable?

Trucost calculated the financial costs for the environmental impacts of a desktop and a laptop. It is worth noting that we used industry average data and that, of course, there is significant variation among products. We analyzed the stages of the product lifecycle — from raw material processing and manufacturing through to transportation, use by the customer and endisposal or recycling. The carbon emissions, water, and waste flows were calculated for generic products in each category. Note that for the use phase we did not include the emissions arising from the Internet (data centers), only the electricity consumed by each device. Trucost then calculated the “natural capital” cost of each of these environmental impacts. For carbon we used the social cost. For water, a local issue, we correlated the volume of water required to produce the raw materials with local scarcity by gathering data on the location of production and pricing water accordingly.

To view the full analysis, click on the image below. The percentages show each item's share of the product's total environmental impact. 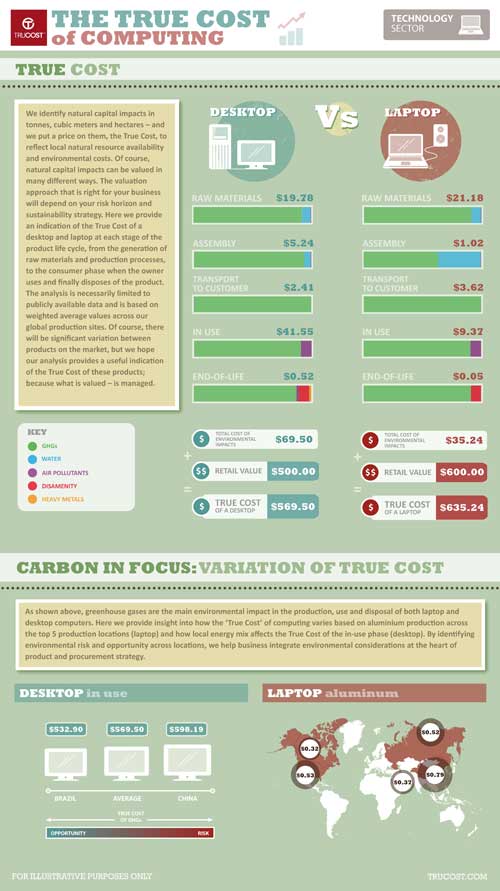 Our analysis indicates that, on average, if nature charged for its services, the “true cost” of a desktop computer would be around 6 percent higher than the retail price, while the laptop would be 14 percent more expensive. Carbon emissions create most of the cost but there are significant differences between the desktop and the laptop. The largest proportion of the desktop's impact comes from its electricity consumption. Laptops consume significantly less energy during the use phase, which is the reason why they perform better overall, though they are marginally more water intensive than desktops.

To demonstrate the optimization opportunity for a laptop computer, we analyzed the true cost of aluminum extraction, a key raw material in laptop production, across the major production locations. We found a very significant 60 percent variation. China had the highest impact due to its coal dependency. Canada had the lowest impact due to the fact that its industry sector uses natural gas for 46 percent of its energy production.

So, is the growth in sales of PCs sustainable? The answer depends in part on how growth of PC unit sales is balanced against gains in energy-efficient technology, and on a switch from coal to less carbon-intensive forms of electricity generation. Emerging-market PC sales are growing at faster rates than developed markets, so a lot will depend on how countries such as China generate electricity.

But this is not the only dynamic at play. Sales of desktops are declining and are forecast to be 22 percent of the total by 2016. Shipments of laptops will grow to just over 50 percent, with tablets accounting for the remainder. Unlike desktops, most of the impact of a laptop (and tablet) lies in the raw material and manufacturing phase. As our analysis of aluminum extraction demonstrates, it will be critical for PC manufacturers to focus on optimization opportunities in the supply chain in addition to improving the energy efficiency of the product. Companies are now using natural capital valuation tools to examine how they can create efficiencies across the value chain that balance a number of different environmental impacts.

Louis Gerstner, the former CEO of IBM, once said, "Computers are magnificent tools for the realization of our dreams, but no machine can replace the human spark of spirit, compassion, love, and understanding." If we are to grow sustainably, we need to optimize value chains in order to preserve the natural capital we all rely on. This will require businesses to work collaboratively to redefine how and where products are made and used. Perhaps we need more of that human spark!

Will the Rise of IT Help or Hurt the Planet?

Dell's New Rules in Leadership for Business and the Environment